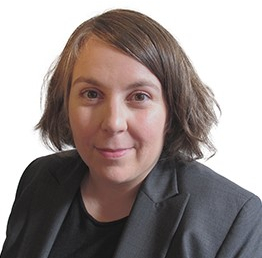 Dr. Karine Abadie, an assistant professor in the Department of Modern Languages, Literatures and Cultures, focuses her research on French cinema -- with a particular eye to a period of significant changes in the medium that has aspects in common with cinema today.

Dr. Abadie is focusing her current research on a particular time period for French cinema. The first is on film critic Lucien Wahl, who published "a huge amount of text" in the inter-war period but is not widely well-known.

"It's a really, really interesting case of a film critic who went 'sur le radar,'" said Dr. Abadie, who received an SSHRC grant for the project. Her plans to travel to France for archival work have been delayed by the pandemic, but she is finding other ways to make progress on the research.

"I need to adapt myself, but it's still possible to do a lot of things," she said.

Dr. Abadie is also working on a project as part of the international TECHNÈS partnership, which focuses on the examination of techiniques and technologies in film history and how those have changed the medium over time. In particular, she is looking at how the imaginary of cinematographic techniques unfolded in specialized French magazines in the inter-war period between 1925 and 1932. Researchers from Université de Montréal, Université Rennes 2 and Université de Lausanne are also part of the project.

That inter-war period is of particular interest to Dr. Abadie because it covers the time period when film was moving from silent to talkies. "At the beginning, cinema was not an art. It was an industry, it was a technique, it was science related," she said. "But in the '20s it really became an art, and it was defended as an art." At that point, the linkage of words to images as talkies emerged meant cinema was now linked to drama and literature, representing another major change in the medium, she said.

Studying that time period in cinemae also has relevance now, Dr. Abadie said, because the medium is once again in a time of transition as people increasingly watch films at home instead of in a theatre setting. "It's a special time for reflection on cinema," she said. "We are in the moment where things are changing."

Dr. Abadie's work on texts and viruals extends beyond cinema. In the Winter 2021 semester she is teaching a graduate course on cinema and literature as well as a course about French comics. She says she likes to do collaborative research and to that end is also working with a colleague, Dr. Pierre-Olivier Bouchard, on the cine-roman genre in cinema and literature. In addition, Dr. Abadie is part of a working group on open science for Francophones, which has been discussed in a UNESCO report.

"It's not just an idea for me. It's a kind of basis of my work," Dr. Abadie said. "Things need to be shared, in the most languages possible. Canada has this unique position to be able to share research in both English and French, and I think it's really important."