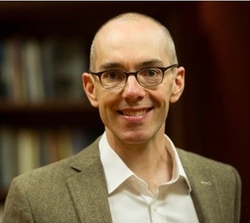 Joel Deshaye is an assistant professor in the Department of English. His book, The Metaphor of Celebrity: Canadian Poetry and the Public, 1955-1980 (2013), led to film and genre studies that developed into his current book project on the genre of the Western in Canadian literature. He is also co-editing a book on Leonard Cohen. He teaches courses in Canadian literature, literary and cultural theory, and film.

What first sparked your interest in English?
When I was in high school, I wanted a better sense of direction before going to university, so I interviewed several friends and acquaintances of my parents about their jobs, including a lawyer, a curator, a teacher. I was leaning towards law, but then I took a few courses in English from great teachers such as William Bartley, Elena Glazov-Corrigan, and Francis Zichy. They had such wide-ranging and sometimes quirky interests! I thought: I can study anything through literature! Life and letters, philosophy, education, history, economics, architecture, geography, painting, film, music, food—it’s all in language somehow. For exploring your curiosities, literature and the related arts must be one of the best choices for any and all students who have chosen programs that have electives.

How has your own experience influenced your academic career?
When you look back, you can connect any almost experience to the direction of your life and work. I’ve been thinking a lot about two competing statements from great books: “always connect” from EM Forster’s novel Howards End, and “connect nothing” from Leonard Cohen’s novel Beautiful Losers. As much as I’m fascinated by the postmodernism of Beautiful Losers, I’m drawn to making connections and I thank everyone in my life who has ever helped me with that project. Whatever or whomever I teach, I try to emphasize how memory and knowledge develop through connections, which are also essential to our imagined and social and economic worlds.

What’s the weirdest/strangest/most surprising place you’ve ever found yourself in the course of your research?
Research, like any open-mindedness, can open up the world. When I first went to Paris en route to a conference in Brussels, I was a little disappointed, because so much of the city was familiar to me from pictures, paintings, and movies, especially the French New Wave films that I saw in one of Don Kerr’s film courses (for which I am still very grateful). When I arrived by train in Brussels, I realized that I had never seen the city before, and it contains so many contradictions of ancient and contemporary life, unlike Paris which became extensively modern but not quite contemporary (if I may say so). I remember walking into a gothic square in Brussels and thinking to myself, I did not expect this! Of course, if I had done some research into the city first….

What are you currently working on?
I’m working on a book about the genre of the Western in Canadian literature and, to a lesser extent, film. It’s a big project that includes a team of graduate students who are developing a multi-book index in the form of a basic database that helps us to track conventions of the genre (e.g., the cowboy or the horse) through many books. The idea is that we could get a bigger picture of the genre and even chart some of its developments by using computers to increase the number of books we can consider. It’s a combination of what’s called distant reading or quantitative formalism with close reading, which is what we do in most undergraduate courses to hone our skills at observation, concentration, and evidence-based explanation. With my friend and colleague Kait Pinder at Acadia University, I’m also working on a book of collected essays on Leonard Cohen, who was one of the writers I studied in my first book, The Metaphor of Celebrity. In the near future, I also want to review my set of assignments based on different learning styles and to adapt it for more of my courses.

What has been the biggest success to date for you personally?
I’ve been lucky; almost anyone in my profession is lucky and privileged in many ways. Doing what I love is success: reading, writing, talking with people about those activities.

What is your philosophy in regards to research?
Philosophy is about how we identify and create knowledge, but it’s also about a love of knowledge, and so my research is driven by ideas and questions that are true curiosities and fascinations. Sometimes we have to be pragmatic, of course, and so my book project on the Western is a sort of natural extension of a course on the Western that I was asked to teach when I was at McGill University. If you look at anything closely enough and openly enough, you can find something in it that makes you wonder. I’ve been telling my students about an essay by Jean Donham, who was a librarian, I believe, on what is an authentic question for research. I conduct my research and teaching in a similar way: by asking myself, and my students, questions that I haven’t yet answered to my own satisfaction. I create assignments for students to ask questions that we can answer together. I suppose all this means that my philosophy in regards to research is about teaching and learning!

What sort of impact do you hope your research will have?
In literature and the arts, not only the fine arts, we have to be realistic about what counts as “impact” and how it is defined, because our fields appear to have little “impact.” Why? It’s partly because they are disadvantaged by the metaphors that imply that our work is measurable in the same way that we could calculate the power of a tackle in football or a bomb on a battlefield. But everybody asks about impact; it’s what George Lakoff and Mark Johnson call “metaphors we live by,” like martial metaphors in sports and politics. I want to turn it around. Let’s ask, how can your research have the least impact? How can it be as harmless as possible—through carbon offsets for travelling to conferences, or through the reduction of micro aggressions, or by seeking justice for the people and other species who obviously don’t count in our badly unaccountable world? How can it be slower (as in the book The Slow Professor) and perhaps more thoughtful and careful, full of care? In this metaphoric sense, I am presently hoping that, one day, someone will look back and say, “His career had little impact,” and this will have been good for the world! A little more seriously, I hope that my research will always call attention to language—and to have some fun with it.

How do you feel your work is helping to boost Memorial’s national and international reputation?
My work has appeared in national and international journals such as Canadian Literature (here), The Journal of Commonwealth Literature (UK), and The Journal of the Short Story in English (France and USA), which brings Memorial to the attention of a wide range of readers. I am on a federal Aids to Scholarly Publications Program committee, which enables me to contribute to what gets published and circulated here and abroad. Partly because of my conferencing in the United States, I’ve recently been asked to contribute a book chapter on Canadian Westerns and transnational comics for an edited collection published at an American university. A lot of my colleagues do this sort of work too. Together, we have sometimes placed our faculty among the top national universities in grants. Although reputation is another of those problematic concepts, one that Shakespeare understood to be a part of the political cronyism in his play Othello, obviously it matters to universities in attracting students and our future colleagues. The more I think about it, however, the more I think that we also need to boost our reputation locally and regionally, because the recent and potentially chronic underfunding of post-secondary education in this province is hurting education here.

How is this research helping address the needs and opportunities for our province?
Many of the needs in this province are beyond what I can do, and I am thankful for all the other teachers out there. We need way better food security and local foods that are not limited to resources of hunting and fishing. We need energy supplies that are, in economic terms, agile and diversified—rather than the monopolistic megaprojects that are obviously not working. We need to divest from oil and gas, which cannot be at the centre of our future here or anywhere. We need to stop letting our plastic bags block up the stomachs of whales. We need opportunities for young people here, and that means empowering young people with the creativity and knowledge and critical thinking skills to create their own lives here and develop sustainable communities. In this last respect, I think I can help, partly by bringing what I’m learning into the classroom and to my peers, and by contributing perspectives from literary studies to interventions such as the book brought together by our wonderful colleagues Lisa Moore and Alex Marland, The Democracy Cookbook, which is all about how Newfoundland can stir it up and make something different for a change.

How are you supporting the next generation of researchers and HQP (highly qualified personnel)?
Three excellent doctoral students are working with me right now: Collin Campbell, with his theorization of distant war, media, and Canadian poetry; Yining Zhou, with her transnational survey of space and masculinity in Westerns and wuxia (martial arts) films; and Andreae Callanan, with her creative and critical knowledge generation on feminism, critical race theory, and anti-colonialism in Canadian literature. I want to get them little badges that say, HQP, like VIP! Again, more seriously, whenever I teach graduate students I remind them that they are really lucky, and I help them to articulate the skills and knowledge that they are developing. They do most of it on their own, and they deserve credit for it. In fact, it is no exaggeration to say that the next generation of researchers is already helping to support us! The university is indispensable because the next generation is already at work, not only on their own projects but also as research assistants and collaborators with ours. It doesn’t start after graduation. It’s happening, and it’s exciting.

What is the one thing you would like the general public to know about your research?
My research on the Western might not seem all that applicable here, at the farthest point in the East (on this continent), but it is. The first episode of Republic of Doyle had cowboys. We have an abandoned shop called First Western Boutique that also has a modern location a block away. We have Western design inside the Rocket Café (Scavenger hunt!), and we had a bar, until recently, called The Stetson. Dayle Furlong, from here, published a novel called Saltwater Cowboys. When I moved here, we dug up a pair of toy six-shooters that the neighbourhood kids had played with in the yard. I’m helping to figure out why a very different region is so appealing to us in this region, and I bet I could get a lot of different answers about this from the general public!