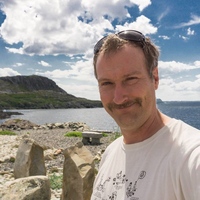 Paul De Decker is an associate professor of linguistics at Memorial University. His research centers on linguistic creativity - how speakers alter their voices to achieve a variety of socially-centered goals. He is primarily interested in variation and change in English dialects due to migration and social mobility. He has used acoustic, articulatory and perceptual analyses to understand linguistic creativity as a tool for constructing social relationships, as well as its role in initiating and transmitting linguistic change. De Decker actively promotes cross-sector, knowledge-mobilization initiatives and in his position as vice president of DOCTalks Inc., a not-for-profit based in Fredericton,
NB, he engages in projects to help produce, fund and distribute knowledge-based documentary media in Atlantic Canada.

What first sparked your interest in linguistics as a field of study?

This goes way back to my first year at York University. I had no clue what linguistics was then. I wanted to go to school to make films but I was curious, and since then I've been sidetracked by an accidental career in linguistics. It started in LING 1000 – taught by a remarkable professor named Rob Fink, who has since passed away, but his understanding of the field and ability to communicate these complex ideas with ease left an impression on me. He was an academic agnostic, forming conclusions based only on what data and evidence told him. Through that I learned to appreciate empirical evidence and how theories and models are built to account for social and linguistic behaviour. Once that spark ignited, a whole new world of research opened up. Since then I have been inspired, mentored and guided by remarkable advisors and colleagues.

Ever since I was a young kid, I wanted to be a filmmaker and was always interested in other people's stories, and later the art and science of story-telling. This lead me to really listen to people and how their own style of speaking conveyed such personality and meaning. Linguistics was a natural fit for me and now I live, work and study on the east coast of Canada with some of the greatest story-tellers there are.

What’s the most interesting place you’ve ever found yourself in the course of your research?

My research has lead me to two radically different worlds: New York City and Fogo Island. While there are some linguistic features the two have in common (such as interdental stopping in words like “this” making it sound like “dis”), culturally, they couldn't be more un-alike. New York City is loud, busy and enthralling. Fogo is quiet, relaxed, and isolated. All very positive qualities. However, I disagree with Sinatra who said that if you can make it in New York you can make it anywhere. I don't think that's true. With great appreciation for Fogo, NYC is much easier. Academically, my experience with the daily lives of Islanders and New Yorkers has helped me to make very few assumptions about how speakers create and use linguistic tools to negotiate their ways through their communities. This in turn forces me to make no short cuts, and to build my research from the ground up.

As always I'm neck-deep in projects. One project documents the linguistic changes in four individuals from their final year in high school to adulthood - 17 years so far – to study how language changes over one's lifespan. These four friends are particularly interesting because
they moved out their small hometown in Ontario to larger urban centers – some to different countries. Some have gotten married and are raising children of their own now. I'm documenting how life changes contribute to variation and change in their speech, particularly their participation in a change-in-progress called the Canadian Vowel Shift.

Here in this province, I'm looking at how NLers use traditional dialect features in the stories they tell to create a character's voice. Many of us do this – we have voices for our family, our friends, strangers we meet, and unruly customers we help in retail jobs. How do we quote them when we tell stories and what does this say about language as a social tool? Finally, over the past year or so I've gotten involved with DOCTalks Inc., a New Brunswick-based not-for-profit that promotes cross-sector collaborations between documentary filmmakers, academic
researchers, community groups, governments, foundations and broadcasters, to produce knowledge-based documentary media projects. That sounds esoteric but it's really grounded and practical – we're figuring out how to work together, share expertise and knowledge via
documentary media designed to raise awareness or tackle social problems local communities face.

For example, I completed a short documentary film about a grass-roots farm in Fredericton, NB designed to teach people how to be farmers, manage a small-scale farm and produce
market-ready vegetables. I'm now working with the farmers to bring their teaching and farming model to Newfoundland. As part of this project I'm looking forward to working with film-scholars to study the language of documentary films and how to deliver knowledge to new audiences that can be used to effect change in tackling social problems – like food-security in Newfoundland. A significant part of this project involves setting up a DOCTalks chapter here in St. John's – open to anyone interested in using documentary media to make change in their community. On this, I'm happy to hear from anyone who might want to get involved in our local chapter.

I look for success in small everyday ways. In an era of precariously employed academics, I'm fortunate to have this job. Awards, funding and accolades are one thing, but if I can get people to talk about my research, that's success to me. I have managed to do this by contributing to scholarly debates on language variation and change with colleagues here and abroad, as well as with broadcasters and media producers. I've been successful enough to speak periodically on the
radio about my research: I've done this with an international audience – speaking about how and why the English language changes on CBC's The Current with Anna Maria Tremonti; and locally – about the evolution of NL dialects. Last year we held the NL Word of the Year Contest on CBC here in St. John's and right now we're gearing up for the 2nd annual NL Word of the Year. Should be a blast.

We are all researchers to one degree or another. But when we choose to specialize in an area we make a commitment to learn from those researchers who came before us, and then to make a useful contribution not for our own gain but for others. While it seems counter-intuitive, research happens in very small steps. We merely formulate some basic idea and go out and test its validity. Adhering to this simple principle we can then begin to understand the extremely complex.

As a social scientist, my largest goal is to communicate the need to challenge ourselves to critically examine how the human relations that make up our world can be improved to recognize the value all people. That's a big hope and if we can get somewhere close to the mark, I'll take it.

How is this research helping address the needs and opportunities for our
province?

My research into sociolinguistic variation and change in NL raises the profile and supports the legitimacy of varieties of English spoken in the province. NL English and all its forms are valid, lawful linguistic systems. NLers know this already, of course. Scientifically, there's no defensible argument for stigmatizing non-standard varieties and their speakers. My work represents these truths and communicates that message to a larger audience. The other half of my research involves collaborating with cross-sector groups to produce, fund and mobilize documentary media, providing opportunities for knowledge-exchange aimed at addressing social challenges faced by Atlantic Canadians. The skills I have developed as a sociolinguist are directly useful to understand and develop strategies for presenting community and academic knowledge to audiences for effecting change where they live.

How are you supporting the next generation of researchers and HQP
(highly qualified personel)?

I have been fortunate to have funding to hire and train undergraduate and graduate students from several disciplines around Memorial including linguistics, engineering, English, and computer science. They get right into research activities with me, from data collection and analysis to paper writing and presentations at conferences. They get a well rounded experience.

What is the one thing you would like the general public to know about
your research?

Linguistics is one of the most relevant scholarly disciplines for understanding the social world because it deals with the structure of language and society. As a case in point, try living socially without using language of any kind. It can't be done. If you have any curious bone in your body, you're probably thinking about all the ways we are completely dependent on this tool. There's nothing more exciting and fascinating than taking those thoughts seriously and turning them into research questions. Linguists do this everyday.