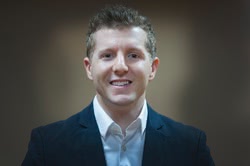 Dr. Justin Fantauzzo is an assistant professor of history. He completed his undergraduate and masters degrees at the University of Windsor. He completed his PhD at the University of Cambridge in 2014, where he was a Cambridge Commonwealth Scholar. He started at Memorial in July 2015. Justin’s research focuses on the First World War in the Middle East and Southeastern Europe and the medical history of the war.

What first sparked your interest in history as a field of study?

For most people, finding that ‘light bulb’ moment in the past is difficult. While I can’t point to one moment, I can point to two. When I was 16 years old, I used to deliver the Windsor Star in my neighbourhood, a suburb of Windsor, Ontario. The route was long and made more difficult in the summer by the heat and humidity. Papers had to be delivered by 7:30 am to catch most people before they left for work. So, I used to get up early, around 5:45 am and deliver the papers. By the time I came home the History Network (when it used to be about history and not ‘ancient aliens’) was playing reruns of Norm Christie’s six-part documentary series, For King and Empire: Canada’s Soldiers in the Great War. The series had Christie travelling throughout France and Belgium, visiting the cemeteries where Canadian and other soldiers were buried, and telling the story of the Canadian Expeditionary Force in the process. I think it was on those tired, sweaty mornings that I started to fall in love with history. The second moment came later and after I had already started my undergraduate degree as a history major at the University of Windsor. Like most academics, I had one professor in university in particular, Rob Nelson, who wowed me with his passion and enthusiasm for the discipline. He’s a natural storyteller. I was hooked. To this day I always tell him that if it wasn’t for him, I wouldn’t be where I am. And I mean it.

I think the experience of growing up in a blue-collar, hard-working city like Windsor, Ontario, and with supportive, caring parents, imparted a sense of work ethic and perseverance in me that has helped me in my career. Academia is a highly competitive, sometimes confrontational world, and one that involves a lot of rejection. You have to be prepared to battle and to expose yourself and your ideas to criticism.

What’s the strangest/most interesting/surprising place you’ve ever found yourself in the course of your research?

The most surprising place I’ve done research was at Marist College, a small, idyllic liberal arts college that overlooks the Hudson River in Poughkeepsie, New York. In 2013, I was writing my PhD dissertation and following a lead on Lowell Thomas, an American journalist in the early twentieth century and later a TV anchor on CBS and PBS. Thomas had travelled throughout the Middle East during the First World War, taking photographs and film in order to compose a travelogue production on the war in Palestine and Arabia. That travelogue became ‘With Allenby in Palestine and Lawrence in Arabia’ and was performed from 1919 to 1924 across the English-speaking world and throughout the British Empire. Of all places, it was at Marist College, where Thomas had received an honourary degree in the 1980s, that he left all of his personal papers, including those relating to the travelogue.

My current project, titled Long After the War, looks at British soldiers who contracted malaria during the First World War in the Sinai Peninsula, Palestine, Mesopotamia/Iraq, and Macedonia – a number that reached nearly 400,000 men. These soldiers suffered not only during the war, as medical treatment of the disease was still in its infancy, but also once they returned home. After demobilization, thousands if not tens of thousands of veterans continued to experience recurrent malaria, with symptoms ranging from shivering and migraines to diarrhea, chronic fatigue, and something like rheumatoid arthritis. For some, their ill-health led to divorce, underemployment, and unemployment. In more tragic cases, other veterans turned to crime, usually petty theft, and committed suicide. The project’s findings so far have been a sobering reminder of how many men survived the war but never really recovered from it.

This is an easy one – starting my academic career at Memorial. Not many people in life get the opportunity to turn their dream and their passion into reality and a career. The 16-year-old me, collapsing into bed on a July morning after delivering newspapers for an hour, watching Christie’s For King and Empire, or the 19-year-old me, watching and admiring my undergraduate professors, never imagined that one day, he, too, might be in their shoes.

I think that research should be fun, collaborative, and at least in history, should tell a story worth listening to. Picking and pursuing a research project that motivates me is crucial. I want to want to go to the archives, to sit down and to think about what I’ve learned and read. Moreover, I want to work with others and share what I’ve learned. One of the most rewarding aspects of my job has been to work alongside graduate students and to collaborate with other academics at other institutions. As they (whoever they are), say, ‘two heads are better than one’.
The storyteller in me also wants to spin a good yarn. I think that some of the best history, whether social, cultural, military, and so on, tells a story that people can either relate to or challenges their beliefs; it makes them think about the past in a meaningful way.

I hope that my research, especially the new project on malaria and the First World War, makes people think differently about the war and its consequences. While many of us are familiar with the war’s political impacts, from the creation of new states and new boundaries to, in Canada, the idea of the war as a nation-building moment in our history, most people are less aware of how long soldiers suffered for. For them, the impact of the war lasted far beyond the conflict’s ‘official’ end with the armistice on November 11, 1918.

Like all of my colleagues, I present my work to an international audience in a number of ways, from peer-reviewed academic journals to conference presentations and other academic meetings. The history department at Memorial is filled with vibrant, dynamic, and exciting researchers, and we all do our best to bring our research to the wider public.

As my new project on malaria and the First World War makes clear, soldiers continue to suffer for years if not decades after they return home. Newfoundland and Labrador has a long history of providing men and women for the armed forces. This project is a reminder that the men and women we send overseas to perform combat and non-combat missions need a support system in place once they return home.

My projects involve the training of undergraduate, masters, and doctoral students. These students learn how to develop and manage major projects, set budgets, carry out research, communicate their ideas in person and on paper, and how to think critically. These are all crucial skills that will help them become successful in their careers and the workplace.

About research more generally, I want people to know that academic research can be both intellectual and meticulous, on the one hand, and fun and accessible, on the other hand. About my research specifically, I want people to know that my research is about understanding the tremendous impact that war has on soldiers and their families; something that all those who have or had family members serving in the armed forces know all too well.