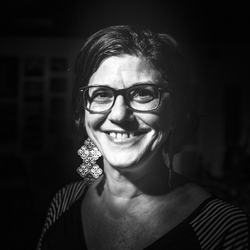 Carol Lynne D'Arcangelis does research in the areas of Indigenous - non-Indigenous relationships, with a focus on the tensions of and possibilities for non-colonizing solidarity between Indigenous women and non-Indigenous women across Turtle Island (North America). Her work is interdisciplinary, drawing on a wide range of literatures including Indigenous feminisms, critical race theory (and critical whiteness studies), settler and post-colonial studies, and increasingly, cultural studies and theories of (public) affect. Her work has a distinct auto-ethnographic component in the way in which it reflects (and reflects upon) her activism as a white feminist ally to raise awareness about the missing and murdered Indigenous women across Canada. Prior to joining the academy, Carol Lynne lived and worked extensively in Central America in the areas of social justice and human rights.

She holds an undergraduate and graduate degree from Harvard University and an MA and PhD from the Ontario Institute for Studies in Education of the University of Toronto. She is originally from Fort Plain, New York (Mohawk Territory).

What first sparked your interest in gender studies as a field of study?

Gender studies is so interdisciplinary it can be about anything. It’s really about what lens you bring to the topic. Over time I’ve figured out that a gendered/feminist lens is really helpful to my work on Indigenous and non-Indigenous relations. It brings to the fore elements of reality that we don’t necessarily see very clearly otherwise.

It makes sense when you think of my history – which is part of the next question!

It’s not an accident that Indigenous/non-Indigenous relations is my area of interest. My introduction to feminism and women’s issues actually began in Guatemala where I was working with Indigenous women as a human rights observer with the United Nations Mission (MINUGUA) during the 1990s. In total I spent seven years in Central America.

I remember talking to a Mexican woman who included me when she said “we are all feminists.” I realized this is a club that doesn’t have membership; feminism is an attitude and analytic, a set of beliefs and practices that you can bring wherever and apply to whatever you want.

I returned to North America and started a masters because I wanted to make sense of “the real world” I had experienced in Central America – so, I ultimately went back to Guatemale to interview women who had been involved in the Guatemalan National Women’s Forum (an entity that emerged out of the UN-negotiated peace accords).

All of these various threads – for example, realizing my lack of knowledge about the Mohawk territory; my introduction to feminism in Guatemala and the Indigenous/non-Indigenous relations I observed there - have combined in different ways.

I made it here despite myself.

What I mean to say is that being a university professor was never in the plan. My life unfolded in such a way that everything came together and in the end it brought me to a place that fits me.

Social justice is at the heart of why I am a professor. I love theory because it can push us in the direction we should be going in – it’s our imagination and creativity at work.

It’s people trying to make meaning and moving forward and coming up with solutions which they never knew existed.

Knowledge can be generated in any particular instance or place or produced by anyone anywhere. You can be talking to someone you just met on the subway and they say something that strikes you.

There have been countless moments like that for me.

I have a manuscript that was accepted by UBC Press that will be published next year.

It’s about the solidarity encounter between white women and Indigenous women in a contemporary Canadian context – essentially my dissertation.

I also want to do some further work on Latin America and am currently thinking about how settler colonialism applies (or not) as a concept to the rest of the continent.

For example, the Spanish and British empire are seen as two distinct occurrences. And yet there is work being done by decolonial feminists (out of Latin America especially) talking about the historical connections betweenthe Iberian Empire and the British Empire.

That would be the theoretical base for a project that would compare and contrast solidarity work between Indigenous ad non-Indigenous women in other parts of the continent – it would be a hemispheric study.

I think it was bringing Indigenous and non-Indigenous women to St. John’s in 2016 to talk about the inquiry into missing and murdered Indigenous women. This hadn’t received the attention it deserved here in Newfoundland.

The pre-inquiry consultations never came as far as St. John’s – just to Halifax.

The inquiry itself is coming here Oct. 16 to 18 at the Sheridan Hotel and will be open to the public who would like to attend the hearings.

I’m proud to have been a part of awareness about that in a small way.

My research has conditioned me as a white feminist ally to be in the background - I am very mindful of the space one takes up in these solidarity encounters. It doesn’t mean backing away or backing out – that would be the opposite extreme of not caring.

I think research isn’t something that can or should be contained. Even researchers when they go somewhere need to be mindful that they are not the only ones producing knowledge.

For me it’s important to have a social justice component built into research. That doesn’t mean you can always see direct link between what you’re doing and policy changes. My personal approach is that I want it to seem relevant to people.

Again, I just hope it’s relevant. Whatever I end up doing will be part of something, I would love to say I’ve solved a problem, but I don’t think that is how knowledge is produced – it’s produced collectively.

There’s a lot of talk about reconciliation. I want to be one of those voices that problematizes safe and easy discourses. Take Muskrat Falls – some Indigenous people are for it, some are against it. But it is about Indigenous land –so we have to think seriously as settlers about what reconciliation would mean regarding Muskrat Falls.

I have been fortunate enough to talk about my research and organize events at several international conferences, all of which raises Memorial’s profile. This past summer I organized a panel at the International Sociological Association in Toronto.

I have been working with Dr. Christina Doonan from political science in consultation with Catharyn Andersen (special advisor to the president on Aboriginal affairs) to bring Loretta Ross, the Manitoba treaty commissioner, to Memorial this fall.

Bringing folks like her here where no treaty was ever signed raises the profile of indigenous issues here in this province. I am grateful to be able to help facilitate this sort of thing.

I want people to understand a little bit better how these very deep seated ideas of “liberalness” have an impact on how we carry ourselves in the world. And ultimately that gets in the way of solidarity.

The idea that we are supposed to grow up and be individuals and be successful comes out of the Enlightenment and is how white folks in particular are brought up. By that logic, an individual therefore isn’t responsible for collective problems.

But, we have to remember that we are part of a collective and we need to take responsibility.