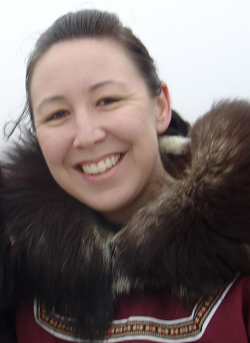 Catharyn Andersen has recently been appointed Memorial University’s special advisor to the president on Aboriginal affairs. The appointment is effective March 18 for a five-year term.

Ms. Andersen comes to the position with significant experience working with the Nunatsiavut Government. She previously served in the roles of director and Inuktitut Language Program co-ordinator with the Torngâsok Cultural Centre in Nain, Labrador.

In these roles, Ms. Andersen managed and developed the cultural arm of the Nunatsiavut Government, built support for and delivered cultural and heritage initiatives, advised the Nunatsiavut executive council on language, cultural and heritage issues, led the development and implementation of the Labrador Inuttitut Language Strategy and managed language programming for Northern Labrador.

Ms. Andersen has been involved with a variety of committees and groups relevant to Aboriginal issues. She is a member of the Labrador Inuttitut Training Program Committee and former chair of the Nunainguk Historical Society. Ms. Andersen has also been harbour operations officer with the Department of Fisheries and Oceans Canada.

When I decided to do my undergraduate degree, I had already spent four years out of the province, and at that point, I wanted to stay in the province and be closer to home. I was already familiar with St. John’s and somewhat familiar with the St. John’s campus, so it felt right to come to Memorial. For my Master’s degree in linguistics, I knew I wanted to focus on Labrador Inuktitut and knew that I would have the support in the department to do that.

What drew you to do a degree in linguistics?

I came to linguistics in a roundabout way. I stayed for the summer semester after my first year, and I was looking to do a couple of electives and picked up Intro to Morphology and Intro to Phonology with Dr. Mackenzie, after having done Intro to Linguistics in my first year. I had always had an interest in languages, and just felt really comfortable with the subject after those two electives. It felt like a good fit and encouragement from Dr. Mackenzie didn’t hurt!

It was quite a long time ago, but yes, there is something that stands out. Throughout my undergraduate years, but in particular, in my first semester at Memorial, I had incredible support from Lela Evans, the Native Liaison Officer (NLO). She hired me as a MUCEP student, and it helped me out on so many levels.

Do what you love.

Since graduating from Memorial you have worked with several groups and communities in Labrador. Why in your opinion is it so important for citizens to contribute to their community?

At the most basic level, it’s just important to give back. Whether it’s a small community, an isolated or rural community or a community within an urban setting, everyone has needs and challenges and most are looking to build capacity. I think it’s important to contribute to your community how and when you can. I’d like to think that I did contribute and give back in some small way and hope that I continue to do so in this role through the university.

What in your opinion is something that NL can do right now to improve the situation for Aboriginal peoples?

In my opinion, this would be at an individual level, and it would be to take some time to learn about an Aboriginal group in your community, or Aboriginal history in our province and/or country. This could be just spending 15 minutes doing a bit of research on the internet, but take the first step to learning a little more. Also my door is always open at the university if anyone is interested in speaking with me.

What sort of impacts are you hoping to make as the President’s new advisor on Aboriginal Affairs here at Memorial?

Having a safe, supportive and inclusive environment is of utmost importance for our students on all of our campuses at Memorial. So one of the impacts I’m hoping to make is to create an environment where Aboriginal students feel included and where they belong. One of the ways through which we can do this is by delivering courses and curriculum that incorporate Aboriginal history, perspectives and ways of knowing and providing appropriate student support services.

In what ways has studying humanities and social sciences affected your world view? What do you say to those who question the value of an arts degree?

Studying humanities and social sciences gives you a unique perspective on the world; it gives you a breadth of knowledge and forces you to think critically about the world. There is value in education, no matter what. And an arts degree allows you to explore, study and research in areas of personal interest about who we are as people and societies.

My dad’s cabin in OkKak, which is about 100km north of Nain, Labrador. I feel a strong connection to the land there and it’s so peaceful. It’s the only place where I feel I can achieve that level of calmness and revitalization.

Perhaps my connection to Russia. I lived in Moscow for a year as part of a high school immersion program through AFS Interculture Canada. I lived there from 1990-91 which was the last year of the Soviet Union and got to travel to some very interesting places – Kazakhstan, Ukraine, Belorussia, Estonia, Latvia, Lithuania and the Caucasus Mountains. My interest in Russia continued and I did my minor in Russian Language and Literature at Memorial and went back to Russia in 1998 as part of Memorial’s Russian summer program at the Russian Field School in St. Petersburg.

I’m reviewing some curriculum text for an Inuit Society and Culture course. I’m excited to see the Nunatsiavut Government working on such a great initiative for high school students. I certainly wish I’d had a course like that when I was in high school! Listening to? CBC radio in the car and Coast 101.1 from time to time.

What are you most looking forward to next year?

Everything. I’ve had a fantastic welcome to the university, and I’m looking forward to building on some great work that’s already been done and the current initiatives that are taking place. I’m really looking forward to going out and meeting the Aboriginal groups and organizations of our province.