Like most medieval towns, Harlow grew around two principal nodes: the market place and the church. Markets and fairs were a vital part of the economic life of every successful town and a source of considerable income for the landowner. The right to hold markets and fairs was much sought after, and the authority to grant market rights jealously guarded. The first documentary record of the Harlow market is in the reign of King Stephen (1135-1154). In 1218 King Henry III gave the Abbot of St. Edmunds permission to hold a weekly Monday market and an annual two-day fair to be held on 'Christmas and its morrow'. These rights  were renewed by Henry VI in 1449, although the market-day was changed to Friday and two new fairs were instituted, one on May 31 in honour of St. Petronilla, and the other on November 17, the feast of St. Hugh. The May fair dealt primarily with wool, and the November fair with horses and cattle. Both were originally held where Barclay's Bank in Station Road is now located but at some point the November fair was moved to Churchgate Street where it was held regularly until 1835. 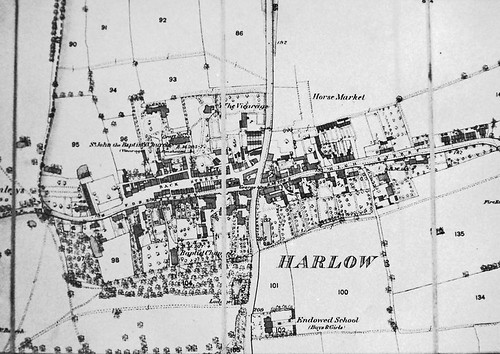 The most important fair was the Harlow Bush Fair, held on Harlow Common on 29 August, the feast of St. John the Baptist. After the Gregorian calendar was ado0pted in 1752, the date was moved to 9 September.  This was a prosperous fair, but became increasingly rowdy and was terminated in 1879, although its name lives on, having been given to one of the large neighbourhood shopping precincts in the New Town.

The original Harlow market was probably held where the Chippingfield estate now stands, east and south of the old Post Office (now Domino's Pizza) on London Road. 'Chep' was the Saxon word for market and the word was anglicised to 'chipping'. It later moved to the Market Square, an open space extending from the south side of Fore Street north to the site of the former St. John's Church that is now the Arts and Recreation Centre. Most of the buildings around the open space were dual-purpose, residential and commercial buildings with stalls in front. Typically, part of the market square was filled in, first by buildings on the north side, and then by a 'middle row' which separated Fore Street from Back (now Market) Street.

The buildings in the High Street were not shops during the mediaeval period. Contemporary surveys referred to what is now the High Street as 'the way from the market to the Church'. The buildings were occupied by ‘mole men’ or small-holders whose strips of land lay in the 'Chipping Fields’ to the south. These men rented the land, unlike lower-status villeins, who earned the right to farm their land through payment in goods of labour.

The Harlow market never flourished, and it seems to have lapsed in Tudor times. The last documentary reference to was in 1554. There was an attempt to re-establish it in 1652, but it had failed again by 1850. A new market house was built opposite The Crown public house in Market Street in the early 19th century as part of another unsuccessful attempt to re-establish the market. This attempt also failed in the face of competition from too many other rival markets, and no trace of the market house survives.