Two of Harlow’s basic planning concepts were essential components of post-war modernist design: the neighbourhood concept, and the separation of pedestrian and vehicular traffic. Neither could be fully implemented except in the context of a new town. Neighbourhoods, which were projected by different planners to range from 3,000 to 10,000 in size, were to be large enough to support the efficient operation of local schools and retail facilities. Neighbourhoods were to be separated from each other by green spaces through which arterial connector roads would run. This would keep through traffic on the periphery. Within the neighbourhood, pedestrians would be accommodated on sidewalks and footpaths, cyclists on dedicated cycle tracks and local traffic on narrow roads. Critics have argued that traditional street patterns handle large volumes of traffic more efficiently, but the notion of car-free neighbourhoods, based on the so-called Radburn Plan, had a huge impact on the townscape of Harlow. 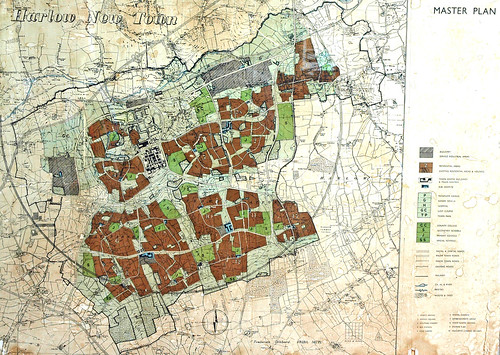 Harlow was designed to have seven residential neighbourhoods, located in four large quadrants. Three of them were provided with their own neighbourhood retail centre: The Stow, Bush Fair and Staple Tye. The fourth quadrant, containing Hare Street and Little Parndon, is served by the town centre that is also the principal retail and administrative centre for all of Harlow. Old Harlow continues to be served by its High Street that was redeveloped and pedestrianized in 1971. All the original residents had easy walking access to one of the 17 small ‘hatches’ which provided daily necessities, and usually a pub. Each neighbourhood had at least one primary school, accessible by pedestrian and bike paths. 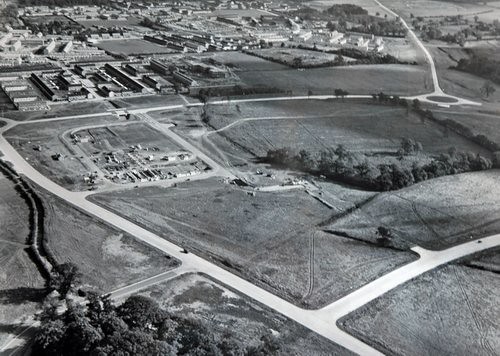 Gibberd drafted the plan having been advised that the M11 would run along the west and north sides of the town. The two industrial areas were located accordingly: Pinnacles on the west side and Temple Fields on the north. Unfortunately, the government decided in 1964 that the motorway should be on the east side of the town, to provide a more direct route to the third London airport at Stansted. Gibberd protested the decision, to no avail, arguing that this made as much sense as planning a sea-side town, and then moving the sea. Gibberd's industrial transportation plan was badly affected by this decision.

The A414 enters Harlow at Junction 7 of the M11, travels north and then crosses Harlow along Edinburgh Way, the main east-west spine road that runs along the north edge of the town. This road is badly congested, partly because of the unanticipated decision to relocate the motorway. Heavy goods vehicles travelling from Pinnacles to the motorway are forced to drive all across the town. Traffic patterns and levels of congestion have also been affected by the decision to provide only one junction with the M11, and to locate it at the south end of the town. In 2016, after more than a decade of deliberation, the government decided to build a second junction, half-way between Harlow and Sawbridgeworth. The new junction, feeding into Gilden Way, will have significant effects on traffic flows and volumes. Whether it will ameliorate the existing problems without causing new ones remains to be seen. 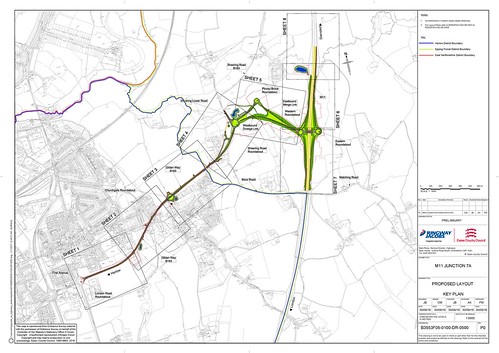 Congestion along Edinburgh Way has also been increased by the central government’s overturning of several Harlow Council’s refusals to grant planning permission for retail and commercial developments in what the Council considered 'non-traditional' locations. As a result, the road is now lined on both sides by ‘big box’ stores and power centres that can only be accessed comfortably and safely by car. The inevitable result is that retail trade in the High Street of Old Harlow, the Town Centre, and the three neighbourhood shopping precincts has suffered dramatic declines.