This former hotel dominates the corner formed by the intersection of the town's two main roads. Since Fore and High Streets were pedestrianized in 1970 the former importance of the intersection disappeared. Parts of the structure date from the 16th century although it was completely renovated and 'Georgianized' in the 18th century. It was obviously a public house as early as 1602 when the publican, Richard Staines "at the George, Harlow, was charged with buying, selling and keeping beer on the Sabbath". When it was on the market in 1829 it was described as possessing 'convenience and accommodation for families of respectablity with a large yard, coach-houses and stabling for 18 horses'. The stables were located in the 50,000 square foot 'George Yard', located to the north in what is now Station Road. The site is currently occupied by Evans, the motor engineer.

When The George was for sale in 1890 the advertisement indicated that it had a large sitting room, five bedrooms and box room and a water closet on the first floor and 3 bedrooms on the second. The ground floor had an 'entrance passage, bar, commercial and smoking rooms convertible to one large room when required by the removal of a movable partition, taproom, small parlour, kitchen and larder.' The basement was said to provided capital cellerage comprising coal, wine, spirit and large beer cellars.' The public house license was given up in 1948 and since then the building has housed a succession of different businesses including Frank Peering's 'George Fabrics' and Ivy Arden's dress shop. Gloria McCartney operated the Gloria M. Skincare Centre in the small outbuilding on the north-west corner of the property for 28 years until 2017. That space is now occupied by Haych Em Gentleman's Grooming Lounge. The rest of the ground floor is occupied by Intercountry Estate Agents which succeeded Masters and Watkins Estate Agents. 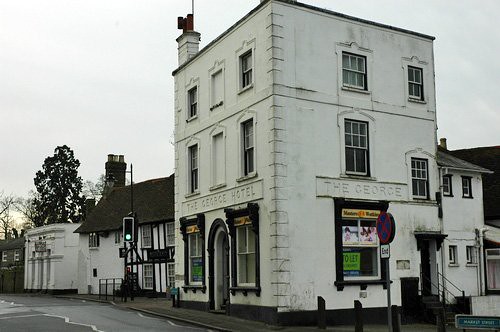 The Marquis of Granby*

This early 16th century building (ca. 1519) with later additions. The first floor was jettied but this characteristic mediaeval feature probably disappeared when the building was faced with plaster in the early 18th century. A survey of 1722 identified it as The Wheatsheaf public house, "situate and being in Harlowe Towne in ye Middle Row there", but it had taken on its present name by 1769. The pub was closed in the spring of 2019 under a Baliff's order, yet another pub house that has struggled unsuccessfully to adapt to changing drinking habits and stiff competition from big-box retailers of beer and spirits. 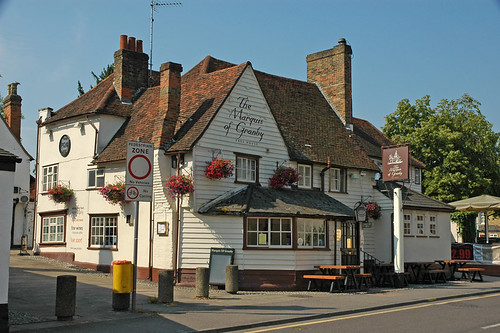 In the mid-19th century Robert Aplin, who owned Piper's Mill in the Sheering Road, operated a bakery at the west end of this mid 18th century range. In 1910 his daughter married a Seeley, and the business became Seeley's Bakery and Confectionary. Contemporary photographs indicate that Ernest Dorrington operated the bakery for a while before he opened the High Street shop, from which the company still trades, in 1925. The Fore Street bakery was then  taken over by F. Martin, who moved here from his previous location  in the High Street. His premises occupied the largest part of the building, and the Boulevard Stores (chemists) the remaining portion. The building was converted into three cottages in the early 1970s during the reconstruction of High and Market Streets by the Harlow Development Corporation. 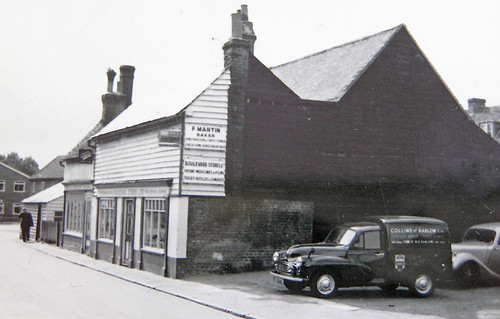 The area west of the Marquis was occupied for a long time by the Middle Spine which ran westwards from the pub, It consisted of the two Judd's Cottages (facing Market Street), a terrace of 8 cottages facing Fore Street, and another terrace of 9 cottages. All of these are shown on the 1875, 1920 and 1947 O.S. maps. The group of 9 had been demolished by 1958 to make way for a parking lot and the remaining 8 disappeared during the post-1969 redevelopment of Market Street. They were replaced with another parking lot. While the lots are always full, as every inch of parking space is in the U.K., the removal of the buildings of the Middle Spine destroyed the visual continuity of what was previously a much more attractive street. 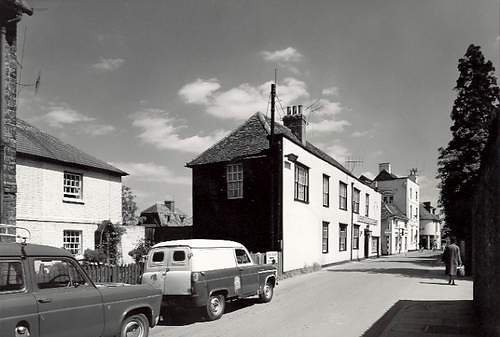