This house was built in the early 17th century on the site of the old vicarage that was demolished after the suppression of the chantries in the late 16th century. It was encased in brick in the 19th century.  It sold for £725,000 in 2015 and its current market value is estimated at £850,000.

A new house built in the former garden of Meadhams in 2018.

A house probably dating from ca. 1600

Built ca. 1600. Refronted and rendered over with stucco, probably during the Georgian period. By the 1880's it was Archbell's grocery and drapery shop. After one of the shop assistants by the name of Jacob married the owner's daughter it became Archbell and Jacob. The grocery side of the shop was closed down when Young's shop at Mulberry Green was taken over by new owners. The drapery shop closed 1936 and became an antique shop. By the 1950s it had become Frank Perring's shop. Subsequently the shop extension on the front of the house was removed, stacked bow windows were added on the north end, and most of the windows in Mill Lane were covered over. The front of the house is rendered over but the wooden beams in the Lane remain exposed. 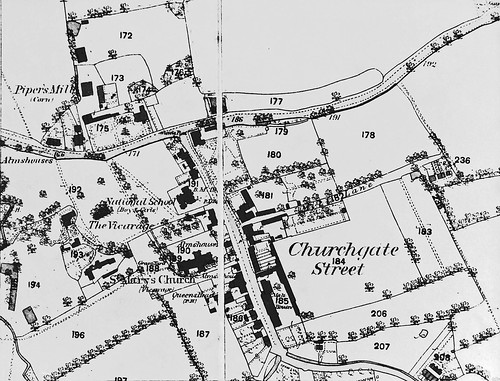 Deeds for these buildings date from 1664. A sub-Post Office was operated here from 1894 to 2009. The original owners were Mr. and Mrs. French, parents of the two headmistresses of Fawbert and Barnard's School, located in London Road. The telephone kiosk in front of the shop is a Grade II Listed Structure. It's a model K6, designed in 1935 by Giles Gilbert Scott , grandson of Sir George Gilbert Scott, designer of the Anglican Cathedral in St. John's, Newfoundland, to commemorate the Silver Jubilee of King George V. This was the first type of red telephone kiosk to be widely used in the U.K.

A late 16th century range of tenements, timber-framed and rendered. The original 8 cottages were consolidated into 4 in the 1960s and enlarged by the addition of a range of new rooms built on to the back of the original structures. The ground floor of one cottage was removed to provide access to the large rear yards of the two central houses. 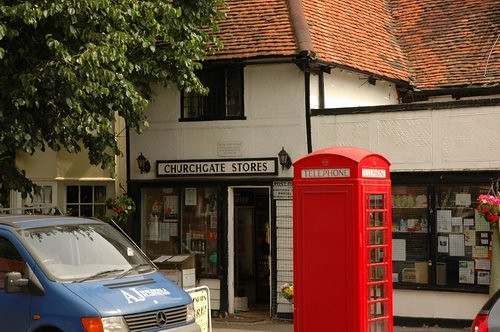