Seventeen small ‘Hatches’,  groups of shops providing basic necessities, are scattered throughout the residential neighbourhoods of Harlow. In the early days of the New Town most of them had a newsagent and a greengrocer and two or three other shops such as a café or restaurant, a barber shop, a small grocers, or a bookmaker. Most of the specialist shops have been replaced with larger convenience stores. The one thing that has not changed is the proximity of a pub – almost all of which are named after an Essex butterfly.

Clifton Hatch is in the Latton Bush neighbourhood on the southern edge of Harlow. The shops located there in 1977 were typical of the time: V.A. Cooper Newsagents; Bamboo Fish Bar; Philip Water Greengrocer and Fruiterer, and Food Fayre. These have all gone, replaced by a Spar convenience store and Harlow Kebabs. Burgoyne Hatch in the Mark Hall North neighbourhood has Clippers Barbers, B & U Convenience and Wing's Garden Chinese Takeaway as well as the Purple Emperor pub. In 1994, Ward Hatch in Mark Hall South was occupied by W.H. News and Off Licence; a Mini Market and Off Licence; Harlow Quality Fish and Chicken Bar; and The White Admiral public house. The pub remains, but the other businesses have been replaced by Jad's Convenience (offering Groceries, Newsagent, Off License and Lottery) and Eat Well Chinese Takeaway. 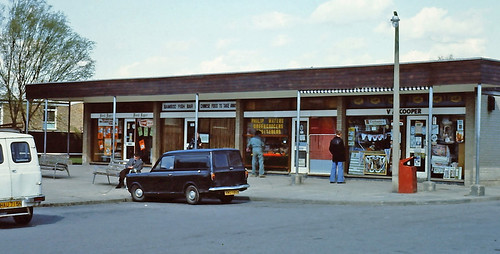