An early 18th century house that was divided into two tenements in 1777. The date of its conversion to a pub is not known, and it is not identified as a public house (P.H.) on the Ordnance Survey maps of 1875, 1921 or 1947. During the 1970s Tony's Cafe was located in its back yard, although accessed from Station Road. 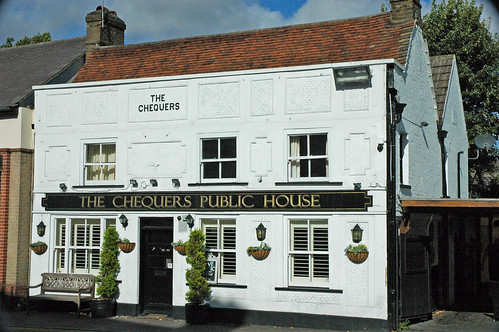 Occupied by Centurion Properties and the Harlow Business Centre. The original range of shops on this site was occupied in the 1950s by Mary O'Sullivan's house and shop, then Lucking's Butchers and a shoe repair shop. The Bishop Stortford Dairy Farmer's milk depot was behind the shops. After the major rebuilding of Market and High Streets in 1969 the premises were taken over by Wilce Taylor, the area's wholesale distributor of newspapers and magazines. The old range was demolished in 1989 and replaced by offices and the cottages of Black Lion Court. 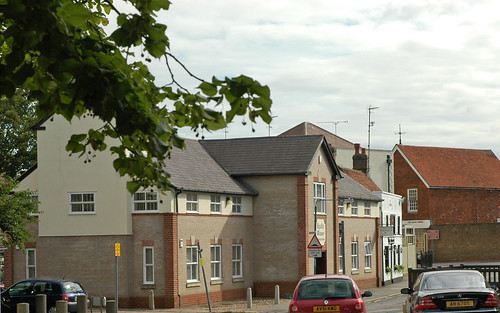 Terraced cottages, ca.1900-10. The small porches were added during the renovations carried out in 1969.  The Old Harlow Conservation Area report considers them to have been an inappropriate addition. 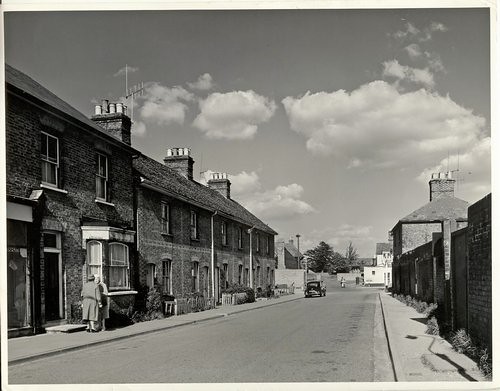 This building was formerly known as St. John's Villa when it was the home of Charlie Coleman and the showroom of C.M. Coleman and sons. In 1969 it occupied by the Boulevard Stores. The building was slated for demolition during the extensive renovation of High and Market Streets in 1969, but the building was given a reprieve and converted into two cottages and four flats, all originally owned by Harlow Council. 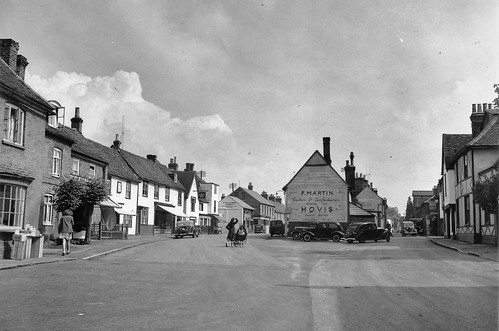 A block of flats, built in 1969 on the site originally occupied by the shop and showroom owned by John Coleman, ironmonger, decorator and dealer in hand tools, hardware, and builder's materials. The business was later taken over by his son C.M. (Charlie) Coleman. The land occupied by Coleman's Yard was added to the back gardens of the three cottages in St. John's Walk. They are now owned by Memorial University of Newfoundland, and known as Cabot House. 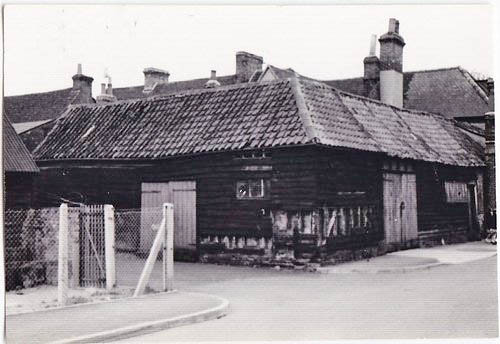 The Crown is a 15th century building that was originally jettied. In 1703 it was an inn where the justices of the quarter sessions had their lunches there. Number 38 was owned as a separate unit in the late 19th century when it was modified and re-fronted. it was bought in 1932 by Tommy Gladwin who, with his Florence (usually called Florrie), operated a general store here for more than 50 years.  Gladwin's family operated a Market Street confectionery specializing in home-made ice cream during the early years of the century. Tommy served in the British Army between 1916 and 1918 and then rejoined the family business before setting up shop as a greengrocer and grocer on his own. He worked a 12-hour day, six days a week (from 6:00 a.m. to 6:30 p.m.) and from 10:00 a.m. to 1:00 p.m. on Sunday. He bought a tricycle to use for deliveries in 1922 and used it for 38 years. In 1960 he replaced it with a green Gundle Box Carrier tricycle built across the street by John Collins - a tricycle that was well-known by everybody in town. It is now part of the cycle collection in the Museum of Harlow.

On the morning of Friday, October 1, 1976 Gladwin felt ill and closed the shop for the first time in living memory. He died later that afternoon. His widow, popularly known as 'Mrs. Tom', ran the store until it closed in 1986.

In 1996 the abandoned store was bought by Greene King Brewery and re-integrated into the Crown. During the conversion one of the ground floor rooms was found to contain what the Department of National Heritage describes as "two very rare panels of early 18th century wall paintings depicting red and yellow flowers. These are an imitation of Chinese-inspired wallpapers to avoid the wallpaper tax which was in effect between 1712 and 1836." They are now preserved behind glass panels. 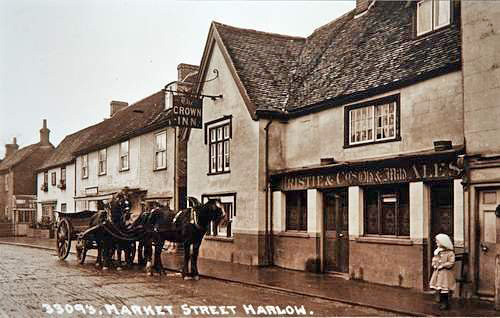 This is the east end of a mid-18th Century range of tenements. It was formerly a shop run by H.M. (Bert) Fish, Fruiterer and Greengrocer, and his wife, Lillian. When Mrs. Fish ceased trading, the building was vacant for some time before being taken over by the dentist Dr. P.S. Arbon. After she moved her practice the building was taken over by a succession of dentists: the Graceland Dental Clinic, the Mulberry Dental Clinic and now the Harlow Dental Surgery. 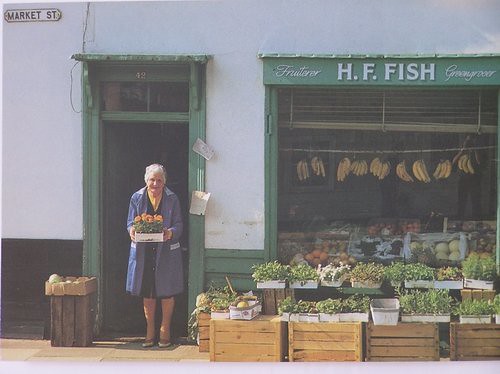 This is the west end of a mid-18th Century tenement range. For many years this was the house and shop of different butchers. The name Barker is listed in the commercial directories between 1878 and 1922 for either Back or Market Street and sometimes Market Square. Henry, and then Wilfred Barker traded out of this building. After Henry's death in 1954 the premises were taken over by Wilfred Norman. His slaughter yard was located behind the building on a site now occupied by two sets of garages and a parking lot. The building was purchased by Memorial University in 1973 and converted into two flats. 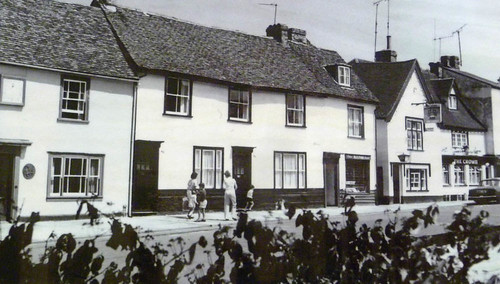 A mid-18th century, timber-framed house. The date 1762 is inscribed in the plaster on the original rear wall of the house which is now enclosed by a later extension. The motto on the sundial over the front door says 'Wafte no Time 1759'. In the late 19th century this was the home of John H. Thurgood, farmer, baker and miller, who owned the Latton Mill. His farm near Harlow produced a variety of Red Wheat which won a silver cup at the London Agricultural Show in 1880. At some point before its conversion to a residence it was Meredith's Sweet Shop. 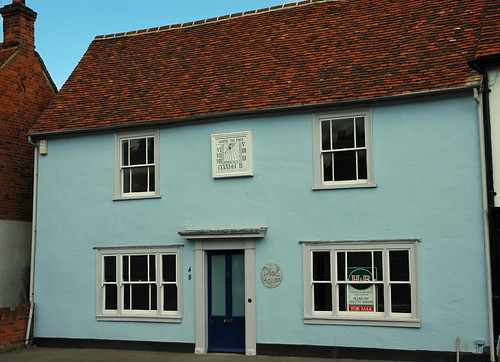 This building has been converted into flats.

From as early as 1874 this was John Thurgood's bakery. It is easily identified in old photographs by the three clipped trees and the decorative fence in the front. The bakery closed in 1912 and the shop was taken over by Mr. Savage, 'Gentleman's Outfitters'. In time this became Savage and King which traded here until the summer of 2003. The original wooden Savage and King shop sign is still there, hidden behind the modern plastic sign which identifies Future Let Estate Agents as the current occupant. 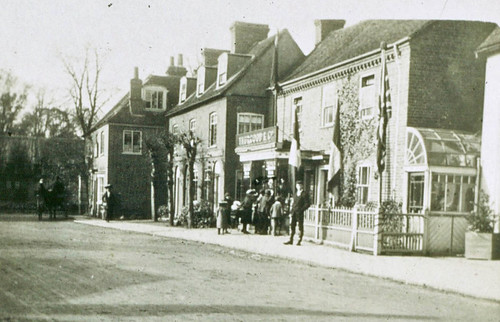 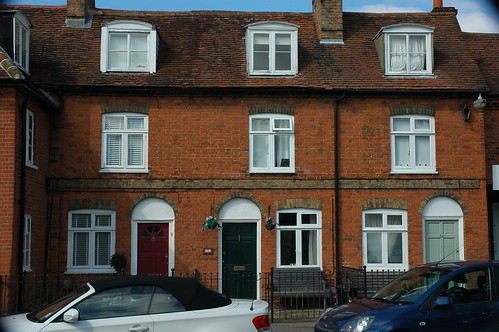 'Nunn's' is a red brick house, ca. 1700. It has been a single dwelling since the 1960s but was previously two premises. The easter one (originally #60) was occupied by fishmonger Albert George Banks between 1908 and 1933, according to Kelly's Directory, and as late as 1956 according to the report of the Roads and Planning Committee of Harlow Council which proposed the re-numbering of the Market Street properties. The other shop, originally #62 on the corner of Broadway, was occupied by Mrs Elizabeth Barker. Between 1978 and 1898 she traded in the High Street as a pork butcher, and moved to Broad Street (now Broadway) in 1908. 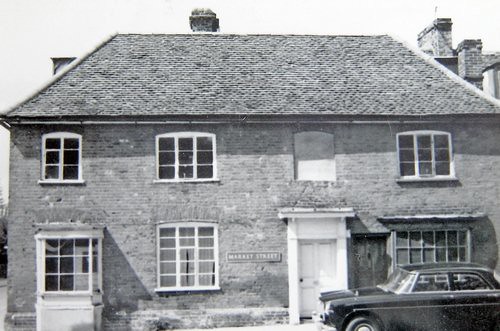