In 1963 a British housing mission visited Canada to study timber balloon-frame building methods. To alleviate a persistent housing shortage the British government wanted to expand and modernize the house-building industry with the aim of being able to  complete 500,000 new dwelling units annually  by 1970. The Canadian government wanted to get a piece of this market for its exports of CLS (Canadian Lumber Standards-sized) lumber and Douglas fir plywood. The British mission found that Canadian methods were highly efficient in terms of cost, on-site labour and value for money and decided that a pilot project should be developed in the UK. The 173 houses in The Maples, tucked into the far south-west corner of Harlow are the result. The unique feature of this estate is not its density – at 12 houses per acre it is a far cry from the 20 dwellings per acre in Bishopsfield – but the fact that these are houses with all the features typical of those in any Canadian city. They have gyprock walls hung on load-bearing wooden stud walls, which allowed for the installation of rock wool insulation in both the walls and ceiling. They also have gas-fired forced-air central heating and hot water supply, insulated walls and roofs, heated bathrooms and built-in wardrobes. Eighty-two of them have attached garages. The exterior finish consists of some Western Red Cedar clapboard, which is not so very different from traditional Essex weatherboarding (although that is most commonly used on barns), and brick veneer, so that in appearance they are similar to traditional English house designs. This was a disappointment to some observers. A lead article in the October 1967 issue of House Beautiful For Young Homemakers, entitled ‘Factory Fresh’ began: Fed up with queuing for a home? … Considering the state of Britain’s building industry – universally recognised as the most inefficient in the country – it is surprising that the mud-and-wattle method of construction was ever abandoned. Therefore any attempt to build houses cheaper and faster deserves an enthusiastic welcome as a step towards fulfilling the basic human need of every family – a home. Although the article was generally complimentary about the project, it concluded ‘it is a pity that such an unconventional house from a construction point of view should look so much like most other new houses being built in Britain today’. 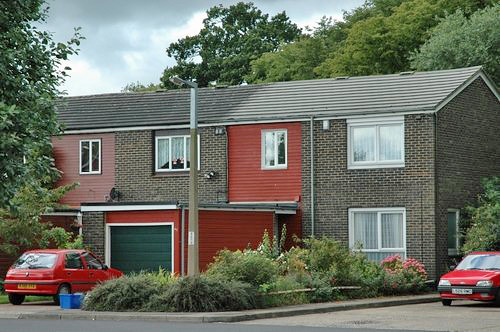 The residents have always been very happy with the houses that are much less expensive to heat than more traditional masonry houses. But they were all built for sale, and were not well received by lenders. In the beginning none of the Building Societies would take a mortgage on them because they were considered a bad risk and the Development Corporation had to provide the financing. In spite of the hope that construction of these houses, which were ‘grown in the rolling forests of British Columbia (and) might provide the key that will quickly and cheaply unlock the door to a home for thousands of British families in the next few years’, the experiment was not repeated, and the hopes of CMHC and the Canadian government for a toehold in the British house-building industry were dashed.