Designation of the Harlow Garden Village Area was based on two considerations: the general characteristics of the area, and the features of the individual houses. The general character of the area is defined by some typical Garden Village features including front garden hedges and lawns, grass verges along the kerb and a significant 'group value' deriving from a high degree of architectural similarity. Some of the houses have distinctive steep pitched roofs (especially between 19 to 53 The Hill and 4 to 30 St. John's Avenue), others have distinctive sweeping gables (especially between 2 and 60 Manor Road), and some display a distinctive palette of beige, yellow, pink and light blue pastel colours, especially on Manor Road and The Hill. Many still have their original doors and canopy porches.

Harlow Garden Village is a legacy of the entrepreneurial spirit of two members of a Harlow family, and their dreams of economic success. Basil Scruby lived in a half-timbered house in Fore Street where he established a short-lived doll factory. One of the dolls can be seen in the Museum of Harlow. In the 1920's he and his brother Charles unveiled an ambitious plan to develop a new housing estate on a large site bounded by what is now Station Road on the west, Priory Avenue on the north, Old Road on the east and the backs of the properties along Bury Road on the south. Significantly they referred to their planned estate as a Garden Village. Readers familiar with St. John’s may be interested to know that the Churchill Park development was referred to in the same way.

The Garden City movement was a reaction against the environmental and social problems of large, industrialized English cities. The idea was popularized in 1898 by Ebenezer Howard, with the publication of his book Tomorrow: A Peaceful Path To Real Reform, which was re-published in 1902 under its more familiar, but inappropriate title Garden Cities of To-Morrow. Howard believed tht the human condition could be improved by the construction of planned, self-contained communities surrounded by greenbelts, and containing a balance of residential, industrial and agricultural areas. The basic Garden City design principles required that houses be laid out at densities lower than the prevailing norm, so their occupants could enjoy sunlight, fresh air and garden space, things that the residents of Victorial terraced houses lacked.  Only two true Garden Cities were built: Letchworth and Welwyn Garden Cities, but there were many degraded copies, including Hampstead Garden Suburb in London.  In spite of the limited immediate impact of Howard's work, the basic principles which underlie his work were incorporated into the design criteria which governed the eight New Towns built around London in the aftermath of World War II. One of them is Harlow.

The Scruby proposal for Harlow was one of the many attempts to cash in on the commercial appeal of the idea. The intention was to create a rural idyll that would attract city dwellers who wanted to escape from London. Then, as now, the proximity of Harlow to London was an important part of the advertising, and the reason that the Great Eastern Railway agreed to have its name associated with the project. The Harlow Estates Company was set up to market building plots along St. John's Avenue, Manor Road and The Hill. The project was not a success, and only a few houses were built. However Harlow Council recognized the uniqueness of this chapter in Harlow's development history, and designated the Conservation Area to protect it. 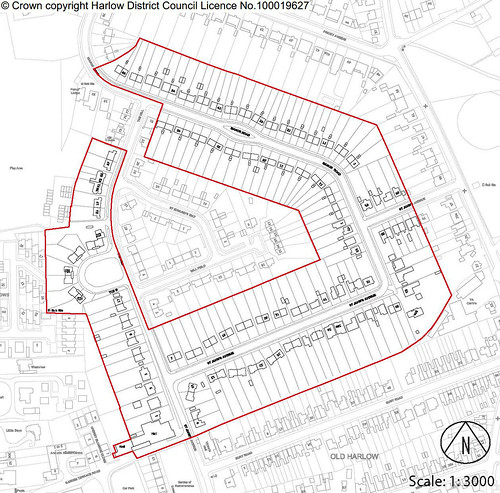