1. The first was the development of planning as a profession, partly as a result of the creation of the Town and Country Planning Association. The TCPA successfully lobbied for the development and imposition of a rational, national-scale planning system, one element of which would be new towns. Many of the goals of the TCPA were supported by the 1940 report of Sir Montague Barlow’s Royal Commission on the Distribution of the Industrial Population. The Commission had been set up in 1938 at a time when there was widespread concern about the possible economic, strategic and environmental consequences of the increasing concentration of British population and industry in large urban areas. The concern was heightened by the fact that while large-scale suburban developments were considered by many social critics as harbingers of inexorable urban growth, the much-needed redevelopment of cities was hindered by the size and poverty of the population living in the inner core. Rehousing this population in situ would inevitably mean the building of large numbers of high-rise flats. These were abhorred, not only by contemporary ‘light and air’ planners, but also by most of their prospective residents.

A principal recommendation of the Barlow Commission was a policy of ‘planned decentralisation’ of population and industry. Another recommendation, the only one taken up in the short term, was the creation of a new central planning authority. The Ministry of Town and Country Planning was created in 1943 and given the responsibility of overseeing the post-War reconstruction of Britain. That same year Professor Patrick Abercrombie, a member of the Barlow Commission, was asked to prepare a plan for the Greater London Area. It called for a greener, more open London, protected from suburban sprawl by an extensive Green Belt, beyond which would be developed a ring of ‘satellite’ towns , which were to be proper towns, providing employment and services, jot just housing. 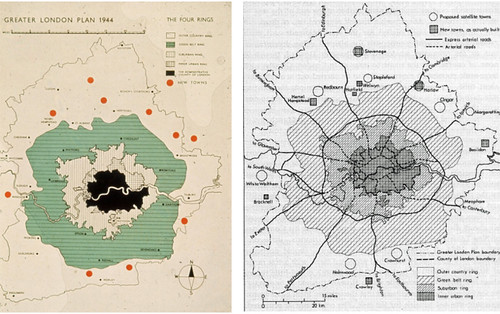 2. The War was the second event. The questions that Barlow had been asked to consider in 1938 were now much more urgent, given the amount of industry that had been destroyed and the number of people made homeless. There was also a new climate of opinion, in which the question of what form the reconstruction of the country might take was considered in light of the generally-accepted idea that the scientific and professional elite could be relied upon to find the appropriate solution. Thus, when the new discipline of planning was given the opportunity to build new communities on a vast scale, the design principles adopted for the New Towns were applied without any questioning of their validity.

3. The third event was the election of a Labour government in 1945. Given the sheer scale of the problems faced by the government, one would have thought it unlikely that detailed consideration would be given to an issue as marginal to its policies as the development of new towns. However Lewis Silkin, the new Minister of Town and Country Planning, believed that ‘one or two’ new towns might be built as a trial. One of his first actions was to establish a committee to “consider the general questions of the establishment, development, organisation and administration that will arise in the promotion of new towns and in furtherance of a policy of planned decentralisation from congested urban areas; and in accordance therewith to suggest guiding principles on which such towns should be established and developed as self-contained and balanced communities for work and living.”

The New Towns Act 1946 was the result. It proposed that about 20 entirely new towns would be built, each one controlled by  a new type of administrative body called a Development Corporation. Each Corporation would have enormous power: to acquire sites large enough to accommodate a town, to undertake all necessary types of development (including houses, factories, commercial buildings and services), and to hire the necessary staff. The government would loan to the Corporation the necessary funds, at the ordinary rate of interest, repayable over 60 years. Fourteen New Towns were designated between 1947 and 1950, eight of them in a ring around London. Harlow was one of them. By the time the New Towns programme came to an end in 1967 a total of 32 had been built: 25 in England, 5 in Scotland and 2 in Wales.