The Gables is a mediaeval hall house built around 1500 The east end cross-wing has a 17th century oriel window on the first floor facing London Road, where the best rooms were located. An original door, now blocked but still visible, gave access from Fore Street to a shop which housed a baker in the 1840s. The west end cross-wing was added ca. 1600. It is peculiar in that it has no internal connection with the rest of the building. When the whole structure was 'Georgianized' in the 18th century the roof was raised and the interior divided. The present front door was the mediaeval entrance to the cross-passage.

At the turn of the 19th century, part of the building was occupied by the offices of the Water Works. During the 1940s, Rhoda's Snack Bar was located here. The Gables Restaurant occupied most of the building from the early 1970s until 2015. One of the more memorable events it hosted was the Arsenal football club’s celebration of its 1979 FA Cup victory. The building is now occupied by Geoffrey Matthews Estates, which moved here from its previous location in High Street in 2015.

The appearance of the building has changed over the years. A photograph taken in 1910 shows the building rendered with stucco in the traditional manner. By the time the lease was renewed in 1917 this ancient method of protecting the structural timbers had become unfashionable. The new lessee wanted to expose the main timbers and the stucco was removed and has not been replaced. 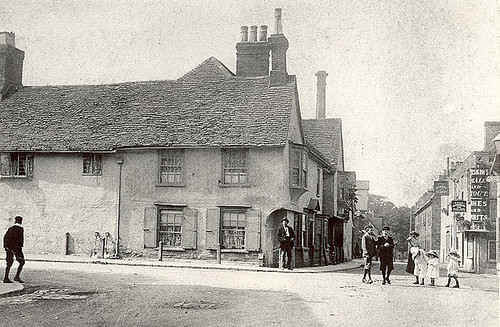 The west wing was reorganized in the 19th century to accommodate a shop. From the 1930s until the mid 1950's it was occupied by A. Goodwin's Harlow Electrical Installations who promised "complete systems installed for lighting. Bells, power, heating, lighting repairs and renewals speedily executed'. He was succeeded by David C. Evans, Electrical Engineer. Between 1990 and 2018 it was occupied by Graham Rogers, jeweller and goldsmith, a member of the Worshipful Company of Goldsmiths. This is one of the 12 great Livery Companies of London. It received its first Royal Charter in 1327, and is still responsible for the issuance of hallmarks on gold, silver and platinum.  Rogers was succeded, briefly, by New City Cleaning and Painting Supplies and then, from April 2019 by 'Little Piece of History' which specializes in antique coins and collectibles. 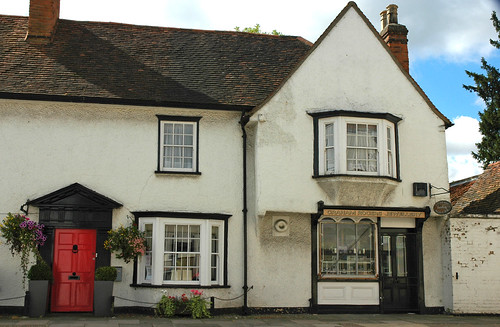 This housing estate was built, starting in 1965, on the former site of Chaplin's Brewery and Brewery House, both built in 1897. The chimney of the engine house, which powered the brewery’s water pump, is a prominent feature in many old photographs.

The Chaplin family were farmers and maltsters and, until 1925, brewers as well. The brewery, established by  Thomas Chaplin in 1832, employed 12 men in the brewery and 11 men on his 300 acres of farmland. After his death in 1890 a new partnership was formed by Frederick Chaplin Edwards and new premises for what was now known as The Harlow Brewery built in Fore Street. The chimney of the engine house which powered the water pump was a prominent local landmark.

The company owned 25 pubs in Harlow and surrounding areas. They included the Green Man in Mulberry Green, the Chequers in Market Street, The King's Head in Potter Street, the Plume and Feathers in Gilston and The Railway Hotel beside the Harlow (now Harlow Mill) Station. The Hotel was built by Thomas Chaplin in 1854 on land purchased from the Eastern Counties (later the Great Eastern) Railway.  The sale agreement stipulated that a hotel worth not less than £450 would be built within 12 months. After closing as a hotel, it continued in business as a pub until the 1950s. It was reopened as Cheeks nighclub in the mid-1980s but was demolished in the early 1990s.

The entire Chaplin company was put up for auction in May 1925 and was purchased by Barclay, Perkins and Co. Ltd., which later became part of Courage Brewers. Within a few years the brewery was closed and the buildings allowed to deteriorate.

The abandoned brewery buildings were taken over by Windowlite Limited in 1933 and the landmark chimney demolished. Windowlite were makers of wire mesh-reinforced plastic that was widely used in greenhouses. During the Second World War it was being used to replace windows in some of London's bombed-out houses. Windolite was still trading in Fore Street in 1958

The old Brewery buildings and the House survived until the the development of the Seeleys neighbourhood in 1965. By that time, the former Seeley Bakery family home facing London Road had been converted to offices for  the Ministry of Labour. It, too, was demolished in 1965 to make way for the houses of the new estate which was named in honour of that family, rather then the Chaplins. 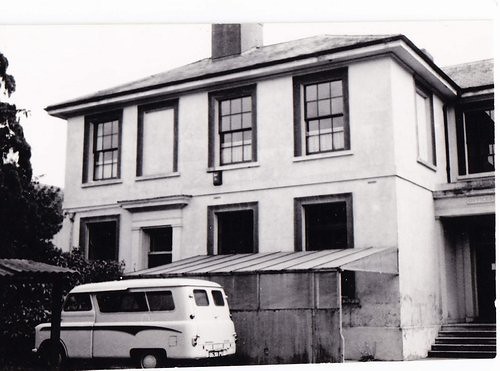 A late-Georgian (ca. 1840) house and shop formerly known as Gresham Villa. The shop front is probably original. Kelly's Directory indicates that a saddlers and harness makers was located in Fore Street from the 1870's until 1933 - the most recent edition available to the author. John Thomas Mumford was the first (1978-1898), then William Malcolm Thomas (1922) and finally Joseph Young (1933). There are very few places where these saddlers could have traded in Fore Street, and it was most likely here. In 1956 there were still two occupants of this building - Mrs. M Young at No. 17 and Gresham Villa at No. 19. The two units were integrated, probably in the 1980s. For many years this was the home of Joan Lloyd, manager of the MUN Harlow Campus in the 1970s, and her husband Davide was the author of The Making Of The English Town, a wonderful book which I used as a course text for many years.

Orchard Cottage is a 16th century timber-framed cottage. Note the frame of the small original window just to the left of the door. The rest of the windows are later additions. A photo taken in the mid 1960s shows that the window had been rendered over. The rendering was later removed, in keeping with popular taste. The timbers, which were not originally intended to be exposed, are now protected by beeswax. The extent to which the level of Fore Street has risen over the years is shown by the level of the door sill. 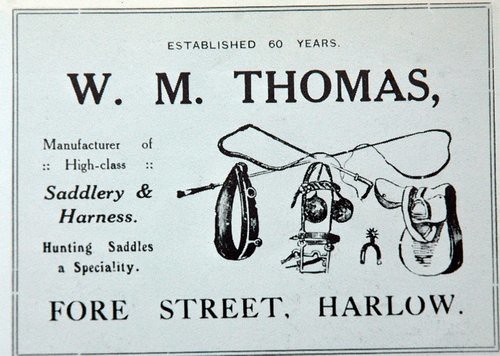 Two brick cottages, dated 1835. From 1896 until 1979, 23 was the shop and 25 (now known as 'Ashton') the house of the Collins family which established a wheelwright and coach building business in the High Street in 1816 before moving to Fore Street in 1896. Three generations of the men in this family ran Collin's Cycle shop., selling Raleigh, B.S.A. and Royal Enfield cycles and motorcycles. They later diversified into automobile repairs and the sale of petrol. Theirs was the first house in Harlow to be provided with electricity supplied by a gasoline-powered generator. The bicycles collected by Mr. Collins were sold to the Harlow Town Council in 1978 and are now in the Museum of Harlow, housed in the former Mark Hall stable block. 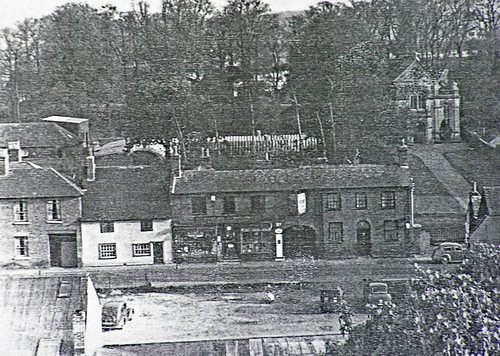 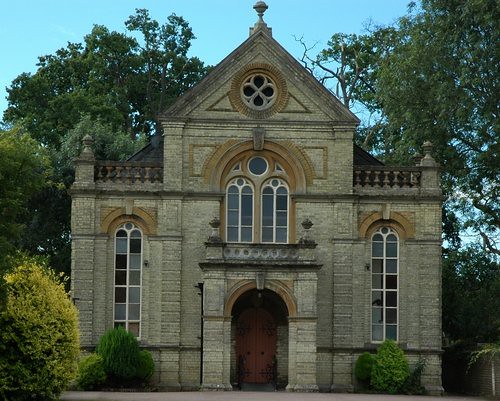