Frederick Gibberd’s Master Plan for Harlow was approved by the Minister of Town and Country Planning on 15 March 1949. The Development Corporation was anxious to get houses started as quickly as possible but their options were limited by the lack of roads and drainage. A small site in Hart Road provided enough space for the erection of four pre-fabricated homes and the keys for the first two were handed over to their tenants on 4 August 1949. Many more houses than this were necessary to house the first great influx of building tradesmen, and a site was found for 120 of them south of the village of Harlow. The estate retained the mediaeval name Chippingfield, from ‘chep’, the Saxon word for market, because it is believed the original Harlow market was held here.

Contemporary photographs of Chippingfield and Mark Hall North, the second residential neighbourhood, provide a stark reminder of the enormity of the task that faced the builders of new towns. Everything had to be built ‘from scratch’. This had profound implications for the first residents, especially the women who had been cut off from their old local networks of kinfolk and friends and shops. The new shops were almost certainly farther away than they had been in their previous locations, trees were either small or non-existent, and roads were unpaved. The stress of moving to what must have seemed like a foreign land was exacerbated by the fact that even the house designs were unfamiliar. 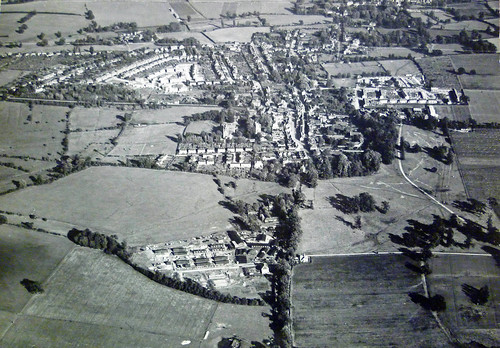 In the 1950s, house designers, male and female, British and American, imbued with modernist theories, advocating putting the kitchen, which was assumed to be the sole domain of the wife’s, at the front of the house ‘so that the women could join, however indirectly, in the life of the neighbourhood’. This revolutionary idea broke the traditional correlation between the parlour and the front of the house. Post-war designers favoured ‘rational’ principles and wanted to do away with what they considered the social pretension of the parlour which was traditionally used only on special occasions, although its window draperies and proudly-displayed ornaments were important status symbols. The obvious solution was to do away with the parlour altogether

Many new town homes were based on the modern open-plan principle. Removing the wall separating the front room from the kitchen helped eliminate what was considered the undesirable spatial divisions that separated life into compartments. The house was then turned back to front. Modernists saw nothing problematic about a captive housewife marooned in her kitchen, passively catching glimpses of an outside world in which she was unable to participate. Many residents disagreed. As one early Harlow resident  put it: ‘when I used to look out of the window I couldn’t see a thing … I thought I was the only person on earth’. The sense of dislocation was reinforced in Chippingfield by the peculiar decision to place the back (service) door beside the front door on the public façade. (Attfield, 1989). In this unfamiliar environment, housewives immediately set to work putting their own personal touches on houses that were not only identical, but also so very different from those to which they were accustomed.

"In trying to domesticate their new dwellings, many women immediately put up net curtains and other traditional window treatments. For this they were excoriated by architects and designers who felt that the women simply didn't understand the necessity of embracing new ideas. On the other hand, the architects had not anticipated, and clearly had no understanding, of the importance that privacy, pride of ownership, and tradition played in the lives of these women. New Town women saw no contradictions in what were seen by the architects, steeped in modernist ideology, as tasteless compromises. They were determined not to succumb to the minimalist, functional requirements of the modern style." (Sparke, 1995) 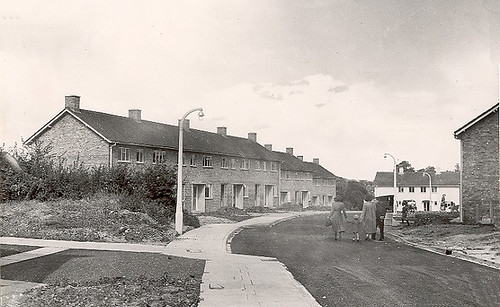 'Harlowitis', the local form of the 'New Town Blues' referred to the very real depression suffered by many women because of their understandable inability to deal effectively with the multitude of new aspects of life in a pioneer town upon arrival. There is no doubt that the enthusiasm of well-intentioned design professionals to try out their new ideas on other peoples' lives made the consequences of dislocation more sever, no matter how happy the majority of people were with their new houses. It is worth remembering that 'urban development is about the fears and fantasies of citizens as much as it is about the dreams of planners' (Hubbard 2010: 414). 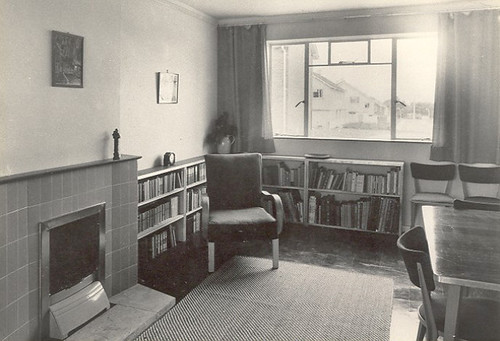