Construction of RAF Hunsdon began in October 1940, as a satellite to North Weald, and it became operational on 4 May 1941 with the arrival of 'A' and 'B' flights of 85 squadron, flying Douglas A-20 Havoc aircraft which had been converted to night fighters with the addition of an early airborne radar. The Commanding Officer was Group Captain Peter Townsend who is perhaps best known because after the war he proposed marriage to Princess Margaret, the younger sister of Queen Elizabeth. Margaret was inclined to accept, but the Queen refused to permit the marriage.

During 1944 and 1945 RAF Hunsdon was home to six Royal Canadian Air Force squadrons. Four of them, 406 (Lynx), 409 (Nighthawk), 410 (Cougar) and 418 (City of Edmonton) flew the deHavilland Mosquito on night-fighter and daylight intruder missions.  No. 442 (Caribou) flew the North American Mustang III. No. 441 (Red Indian) squadron, flying the Spitfire IX, was the last squadron to be posted to Hunsdon, in April 1945.

A few segments of perimeter track and a runway now used by ultra-light aircraft remain, as do many buildings, hidden in the surrounding hedgerows and woods.  The airfield was defended by 12 pillboxes and the same number of gunpits and FC type 'mushrooms'. Six of the pillboxes survive in Tuck Spring Wood, Blackhut Wood, at the rear of Hunsdon Lodge Farm, in the private drive at Drury Lane and two along the perimeter track. The underground battle headquarters with its above-ground observation room is still there, although it is flooded and unsafe. A rare 20 mm ammunition storage building can still be found in Blackhut Wood, along with a small arms store and a parachute packing store. A searchlight crew latrine and clothes drying shelter, and a brick sleeping shelter survive in Tuck Spring Wood.The airfield was equipped with 16 blister hangers, 18 hardstands and two fuel storage facilities, holding 24,000 and 36,000 gallons of fuel. It provided barracks and support facilities for more than 400 male personnel: 100 officers, 140 non-commissioned officers, and 200 Other Ranks. The 276 members of the W.A.A.F. (5 officers, 3 NCOs, and 268 Other Ranks) assigned to the base were quartered in Hunsdonbury house, which had been requisitioned for the purpose. 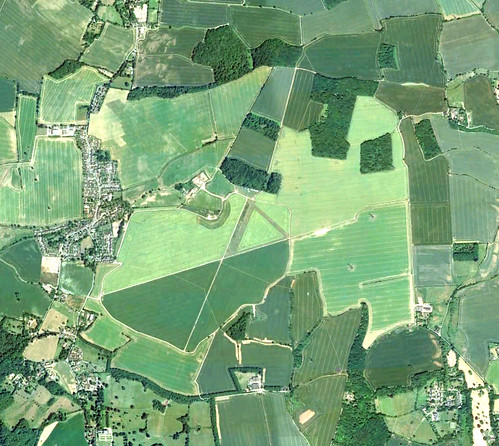