Mark Hall North was home to a major innovation in design and living. The nine-storey block of flats called The Lawn has been characterized as ‘first post-war tower block in the U.K.’, and won a Festival of Britain Award in 1953. Gibberd had wanted it to be four or five storeys higher but scaled it back, anticipating that there would be opposition to a building of this type. He was correct. The idea of a block of flats was strongly opposed by senior civil servants in the Ministry of Town and Country Planning. They felt that building flats in the countryside was an ‘absurd extravagance’. It says a great deal about the challenges faced by the new town designers that Gibberd needed the personal intervention of the Minister before he could proceed with the construction. It was an important victory for him, and for the town. His first architectural commission, in 1934, was Pullman Court, a block of flats in Streatham Hill, London. Then in 1937 he co-authored a book entitled The Modern Flat. The ideas he espoused, in both the building and the book, were those in vogue among modernists who were more attuned to Le Corbusier’s ville radieuse than garden cities. But the crux of the issue was the question of whether the government would permit new town administrations the freedom to develop their own design concepts. The Lawn was an important victory. 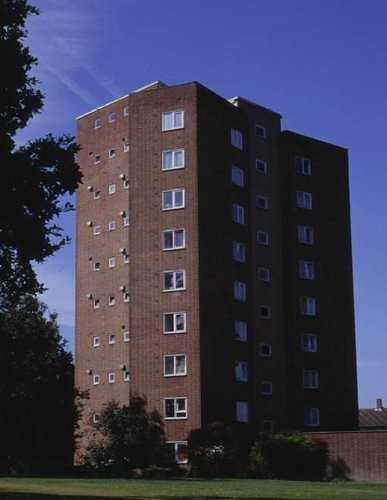 Gibberd was adamant that Harlow should be an ‘urban’ place, with a good mixture of densities and housing plans. Outwardly, most of the houses built in Harlow were traditional terraced ‘cottages’. Gibberd was impatient at the reluctance of Ministry officials to depart from these familiar designs. He believed that tenants would happily accept other forms of accommodation if they were of high standard. He also saw The Lawn as an important symbol. The building is visible from the A414 and Gibberd hoped that motorists, travelling along this arterial road and seeing the building, would realize that Harlow was a town and not just an overgrown housing estate. Furthermore, to meet the objective of creating a town with socio-economic balance, he knew it would be necessary to provide accommodation for young, single people. He believed that the only economical way to do so was by building flats. He also wanted to preserve as much as possible of the surviving natural landscape. The site he chose for this development was surrounded by 7 huge oak trees which he argued could be preserved if a tower block was inserted inside them, as indeed they have been, but not if traditional cottages were built on the site.

Despite the fact that Gibberd thought tower blocks were essential for the success of the design, there were only nine in the original plan. One of the things that a Canadian visitor quickly realizes is that Harlow is a ground-hugging town, reflecting the general antipathy which the English feel about flats in general, and tower blocks in particular.The Lawn didn’t just add some high-density housing – its design made it a mecca for architects for years to come. Although it isn’t evident from the ground, the building is butterfly-shaped with the happy result that the sitting room of every flat has a southern view.