The Stow, opened in 1952, was the first of the New Towns' three neighbourhood shoppping and service centres.It was deliberately designed to be 'urban', with a shoppping parade at ground level and flats above, to ensure that the precinct stayhed alive after the shops were shut. The shop fronts were designed to be continuous, like a village shopping street, with no 'dead areas' like banks. The shop fronts were either recessed, or provided with a canopy,so there would be some protection from the rain, and also a clear break with the residential architecture above. To make the complex feel more enclosed and comfortable, its three separate areas, two squares and the shopping street, were laid out in a Z-plan so it was impossible to see from one end to the other. To Gibberd’s dismay, the Board insisted that the shopping street be open to traffic. He argued that it wasn’t necessary to be able to park right in front of the shops, but there if was feared that if this was impossible it might be difficult to rent the shops, and the income from them was an essential part of the business plan for the New Town. In time the wisdom of Gibberd’s position was realized, and the area was pedestrianized.

The South Square, centred on a group of trees that had previously graced the grounds of Mark Hall Manor, contained the Library, the Community Centre, a dance hall and café. The centre had to have a pub, of course, and like all the others in the new town was named after a local butterfly, the Essex Skipper in this case. As an experiment, a successful one as it turned out, a small group of service industry buildings were erected adjacent to the centre. In its 1951 ‘Review of the Year’ The Architect’s Journal praised The Stow, as ‘a rare exception to the criticism, justly made of New Towns generally, that they lack urbanity’. The centre has struggled over the years, perhaps because of the original plan to include 50 small shops. There was concern about this at the time of construction, and it was decided that the last nine shops should be converted to offices. As the trend in retailing moved to fewer and larger outlets, The Stow has had a hard time competing with the Town Centre and the ‘big box’ outlets in Edinburgh Way. The addition of an Aldi supermarket on the south-east corner of First Avenue and Howard way in 2014 may have been intended to help regenerate the fortunes of The Stow, but its separation from the smaller shops in the original centre by the parking lot will do little to entice pedestrians to make the trek. 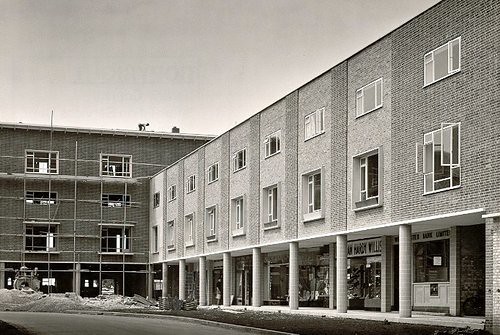 The first phase of Bush Fair, located in the Tye Green quadrant, opened in 1958. It benefitted from the experience gained during construction of The Stow. It, too, has a Z-shaped plan, but was designed from the outset to be entirely pedestrianized. It had all the same sorts of facilities: flats, shops, a library and a pub, as well as an adjoining area of small factories and workshops. Although it sounds paternalistic today, it is worth noting that Gibberd wanted these here to provide local employment, especially for women who ‘were tied to the immediate vicinity’ of their homes. It may not seem like much of an accomplishment now, but the juxtaposition of services and light industry with retailing was a major innovation in an era when planning orthodoxy required rigidly segregated land-uses. It was another one of Gibberd’s small, but important contributions to the development of the town. 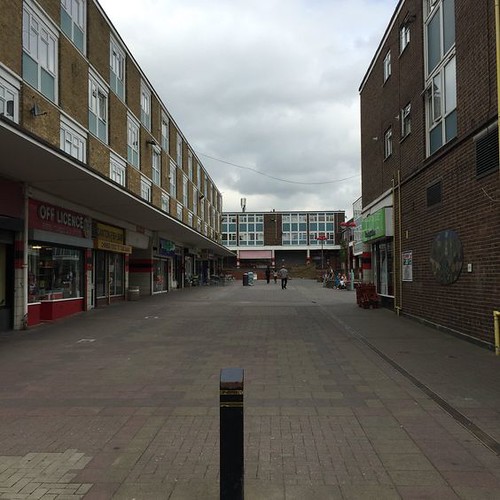 Staple Tye, the neighbourhood centre for Great Parndon, was built in 1965. It was an experiment, designed as an integrated three-level reinforced concrete. Parking and service areas were located on the ground floor, with thirty shops on the first floor and flats on the second. The flats bridged the shopping precinct, the stairwells, and the ventilator shafts from the service areas below.  Like the Clarkhill residential estate, which was also built entirely of concrete, Staple Tye began to suffer structural problems as it aged. Harlow Council decided to demolish the structure in 1990. Two years later a new, very ordinary, single-level centre containing about 20 shops was built in its place. 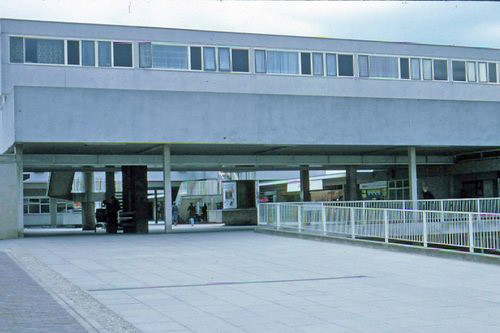 In his retrospective evaluation of the town plan Gibberd argued that these three neighbourhood centres demonstrate the evolution of the shopping function in Harlow. The Stow was designed originally as a traditional shopping street, Bush Fair as an open, pedestrianised complex, and Staple Tye was an innovative ‘decked centre’. Finally, when the Harvey Centre was completed in The High, or Town Centre, Harlow had its first enclosed mall.