An early 18th century facade on an older house. Sarah Flower Adams, author of the hymn 'Nearer my God to Thee', reputedly the last piece of music played by the band of the R.M.S. Titanic, was born here in 1805. She is buried in the Non-Conformist cemetery in Foster Street. The house has a splendid Georgian door under an open pediment with Doric half columns. 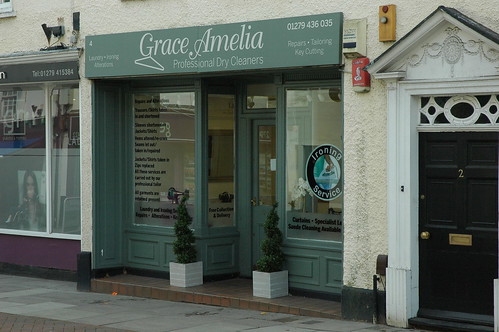 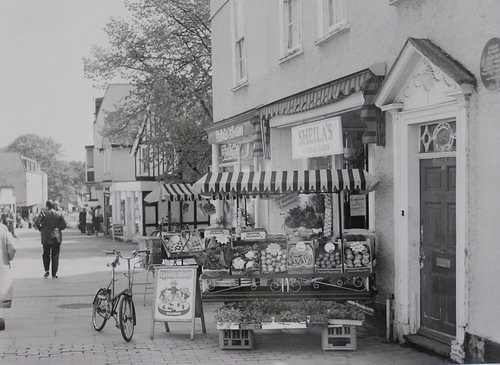 Until 2010 this was part of Giuiletta and Romeo. It was originally a blacksmith shop, later occupied by Vincenzo's Hairdressers, Beard's Gentleman's Hairdressers and F.W. Dearlove, outfitter.

This early 18th century building has been occupied by Guilietta and Romeo Hairdressers since 1974. Previous occupants were G.E. Read , Practical Wireless Engineer ("All makes supplied. Repairs a specialty. Accumulators Charged"), Arderne's Gentleman's Outfitters, and from 1920 Fred Scatley's Gent's Outfitter and Boot Mercer for whom ‘bespoke tailoring was a speciality’. In the late 1960's the business was re-branded and transformed into "Blue Meaning". 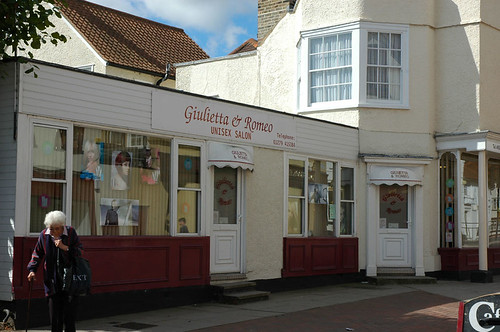 This is the walkway to the carpark and was the source of controversy during the rehabilitation project. It was a cobbled passage, described by the architects as "one of the most attractive features of the High Street" and the original intention was to retain the cobbles. However, the rough surface was deemed a danger to pedestrians, and it was repaved. Some cobblestones have been retained in the narrowest section near the High Street as have the irregular line of the passage. Two pollarded trees that originally graced the blacksmith’s yard survived until 2010, when they were felled.

Since June 2011 this building has been occupied by Fine Wine and Spirits, an excellent, locally-owned off-licence, tobacconist and delicatessen. The shop was vacant from 1999 until 2005 when Fur 'n Feathers pet shop began trading here, and then vacant again from 2008 to 2011. Prior to 1999 it was occupied by Traidcraft, which sold gifts and crafts from around the world. For many years before that it was occupied by Relph and Williams, Chemist and Optician, and in August, 1980 became the first High Street location of Ramco Pharmacy, which relocated to number 40 High Street in 1993. 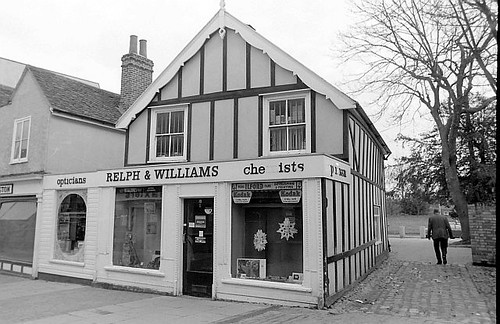 Dorrington's Bakery celebrated its centenary in 2019. It has occupied this  18th century cottage  since 1925. The building retains its original double-range, clay peg-tiled roof and a meticulously restored traditional shop front. Between 1910 and 1920 it was occupied by Stutely the barber. 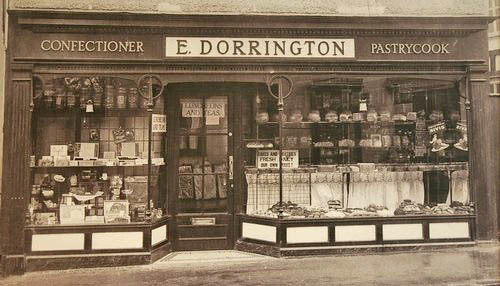 The block of shops, with flats above, was built during the redevelopment and pedestrianization of HighStreet in the mid-1960s. The previous building, which had been severely damaged by a fire, was formerly occupied by Dines ("The Blue Bird Cycle Stores, Agents for all makes of bicycles”); Pye (selling Marconi and Murphy Radios and which advertised ‘battery charging on approved plant'), Kenville Jackson, which sold radios, records and televisions; and Markham's tobacconist and confectioner. The current occupants are:

Co-Operative Funeral Care which took over from the Co-Operative grocery store which had moved here from its previous location in Station Road.

The first occupant of the newly built shop was a hairdresser. Loveday's Opticians took over the premises in 1975. 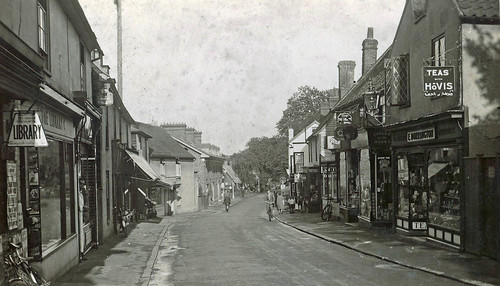 The 18th century façade hides a 17th century cottage which has housed the Old Harlow Branch of the Essex County Library since 1970. Prior to this it was Read's tobacconist and confectioner. When the building was converted for use as a library the children's section was placed in the old cottage at the front, to maximize the amount of natural light. The adult section is located in the one-storey brick extension to the rear which was built in the former Bluebird (or Pratt's) Yard where there had been a carpenter's workshop accessed by a passageway on the west side of the cottage. 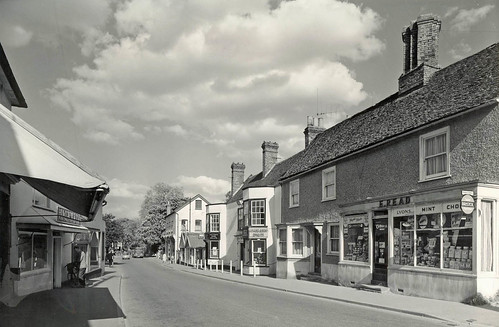 Sugar Palm Thai Restaurant and Sam's Chinese Restaurant. Until April, 2019, this 17th century timber-framed cottage had been occupied by The New Crystal Palace restaurant for many years. A previous tenant was Chattel's, a stationer and picture framer. The original shape of the bay-fronted cottage with its recessed front entrance has been preserved. 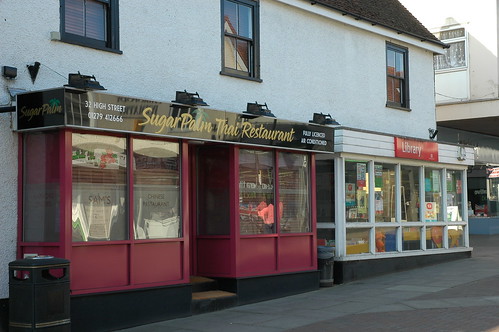 The Golden Grill Turkish Restaurant occupies the western half of a 17th century range with an 18th century façade has been occupied by the Golden Dragon restaurant since 2015. This building, with its semi-hexagonal two-storey bays, housed an Off-Licence from the beginning of the last century to 2010 when it was taken over by the Golden Dragon Restaurant. In the years prior to the First War a Mr. Walsh lived in the cottage on the west side and ran the Ind Coope Brewery off-licence outlet in the east bay. Victoria Wine then occupied the building for many years until it closed in 2010. The shop was then occupied by a chicken and kebab take-away, then a Chinese food takeaway , .

Rina Antonio hairdressers has occupied the western half of this building since 2015. The previous occupants were Sweet Delights, Creative Designs -The House of Flowers which according to its sign was ‘Commissioned for the Princess of Thailand’ and Lane's Audiovisuals. 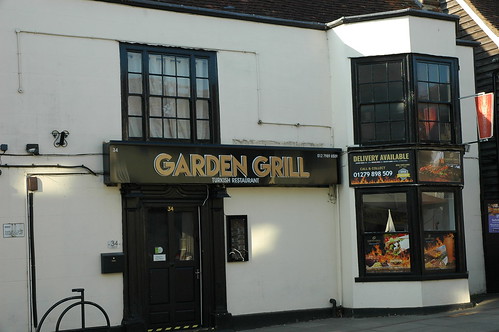 William and Samuel Deards, painters, glaziers and gas fitters, operated a business in High Street between 1874 and 1882. After 1874 Samuel Deards was listed in Kelly’s Directory as an 'inventor'. The impressive semi-circular glass roof over the eastern bay was undoubtedly erected using Deard’s 'dry glazing' method of roofing large buildings. When Deard moved his manufacturing premises west to The Broadway the glazed roof on this shop was replaced by a simple peaked roof and the building was taken over by Harry Coleman and Co.

The Coleman family ran a number of successful businesses in Harlow for a long time. Two brothers had a falling out, apparently around the turn of the 19th century, and William set up his son Harry in competition with his brother John. Kelly's Directory tells us that in High Street you had William, a coal merchant, from 1874 to 1882 and Harry Coleman between 1908 and 1933. Harry advertised his business as: "Furnishing and General Ironmongers; Whitesmiths and General Smiths; Locksmiths; Plumbers, Gas and Water Fitters; Cycle Makers and Agents; Agricultural, Horticultural and Sanitary Engineers; Electric and Crank Bellhangers; Builder's Ironwork and Iron and Wire Fencing." Meanwhile, between 1878 and 1908 John Coleman, general smith, traded out of premises in Back (now Market) Street.

Martin's Bakery. Steve Martin ran a bakery and sold Lipton's teas in this High Street shop from about 1905 to ca. 1925 when he moved into the former Dorrington's premises in Fore Street. Martin sold yeast to those who wanted to make their own bread, and would bake customer's bread late in the day for ½ d. The large sign projecting into High Street says: "Cyclists Rest. Teas Supplied". 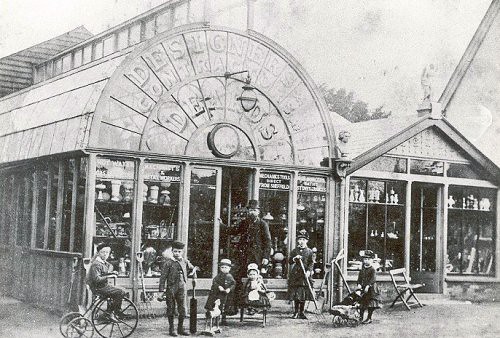 Since the early 1950s the three shops built by the Harlow Development Corporation have been occupied by:

In the early 20th century this was the Carter Seed Agency, run by a Miss Thurgood, who became Steve Martin's second wife. It was then taken over by Goulds, and then Cramphorn's Seed Merchants.

Previously occupied by Bairstow Eves Estate Agents. Once occupied by Martin's sweet shop and tobacconist, it was then taken over by followed by Ramco Chemists. Mr Patel, the chemist, who traded here from 1993 to 2001, when he moved his business into much larger premises across the street. Before him it was Dane's Cleaners, which had taken over from Blakeley's  which offered a variety of services: "General Draper, Milliner, Costumier, Boots and Shoes; Agents for Achille Serre Ltd., Dyers and Cleaners".

This shop previously housed a newsagents, confectioner and tobacconist for many years:  The Bookstack,  S and N Stationers, The Newsrack, and then Old Town Stores.  In the 1960s it was occupied by Beard's Ladies Hairdressers, the address of which was advertised as "No. 1, Old Bakery, High Street", recalling the days when the shop was occupied by Martin’s Bakery. Beard’s advertisements urged ladies to ‘Let Beards redesign your hair’ and offered ‘permanent waving by skilled artists’, promising that ‘a visit to their exclusive salon will delight you’. Beard later moved his hairdressing business to 12 New Road where the building, which has been derelict for more than twenty years, still bears his sign. 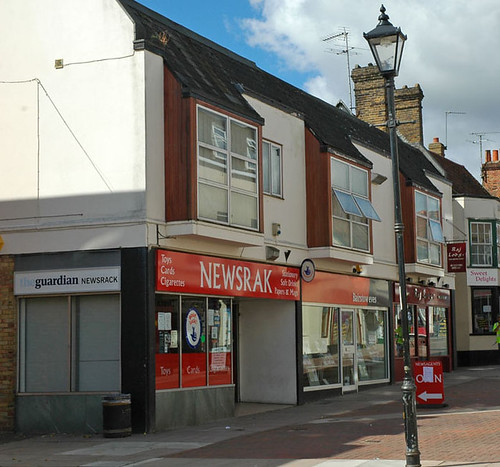 At the end of the pedestrianized section of High Street are two 'pavilions' intended to act, depending on your direction of travel, either as a distinctive closing point of, or the entrance to the shopping precinct. Designed by Frederick Gibberd, they each contain 3-storey, 3-bedroom flats. Beyond them in High Street are:

A mid-18th century house that was a V.A.D. (Voluntary Aid Detachment) hospital during the First War. It now serves as the Harlow Council day centre for the occupants of the 12 elderly persons bungalows in its grounds. 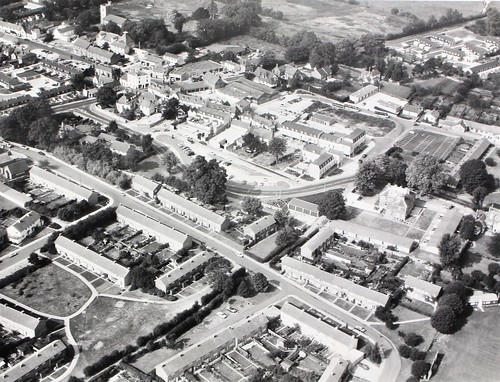 On the outside of the curve just before Mulberry Green are the Fire Engine House, built by John Perry-Watlington of Moor Hall in 1870, and the 1931 St. John Ambulance garage, built in memory of Dr. Charles Chalk who lived in what is now Mulberry Green House (see below). Funds for the building and maintenance of the ambulance station were raised at an annual August Carnival which was held from 1929 to 1939. The Fire Engine house is a Grade II listed building, and its basic structure cannot be modified. It is too small to accommodate an off-the-shelf contemporary fire engine, and so the Old Harlow detachment of the Essex Fire Service had to have its new engine custom-built to fit into the building.

The Green Man* public house, a Grade II Listed, 14th century coaching inn dominates Mulberry Green which, before the construction of Station Road, marked the location where the Cambridge Road turned north. The 16th century Old Forge, now occupied by Strettons Chartered Surveyors lies to the east of the pub. Next is the large building now occupied by Gies, Wallis, Crisp Accountants, but formerly the home of Samuel Young, grocer, draper, milliner and gentleman's outfitter. By 1971 the grocery side of Young's business had been shut down, and the building occupied by Chapman's Hardware.

East of this range of buildings is the late 18th century Mulberry Green House, a Grade II* listed building. This provides an excellent example of how heritage conservation works in England. Originally occupied by doctors Day and then Newcombe, it had no name or number until 1947 when the Harlow Development Corporation gave it one. An arsonist set fire to it in April, 2000 and the building was gutted. The ruins remained untouched until 2007 while several redevelopment proposals were considered. A condition of the planning consent was that the building be "restored to its condition as first listed". In a strict sense this was impossible - a building almost completely destroyed by fire cannot be restored. But it has been rebuilt and now incorporates seven apartments. Ten houses (with 4 to 6 bedrooms each) have been built in the open ground behind the 'restored' house - in a yard last used in the 1990s by Harlow Council as their paper recycling facility. With some exaggeration the development as advertized by the developers as "Late 18th century with 19th century additions". The houses in the development sell for more than £750,000.

The house on the north-east corner of Mulberry Green occupies the former site of Green's Garage. 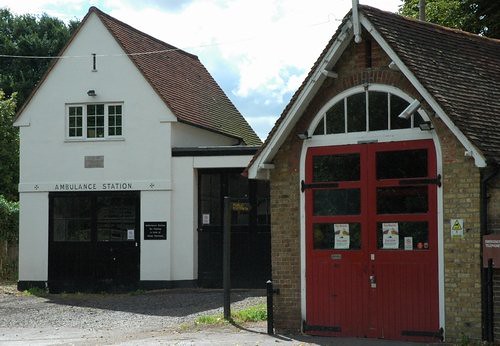