North Weald Bassett aerodrome was established in the summer of 1916 by the Royal Flying Corps and was taken over by the newly-established Royal Air Force on 1 April 1918. The airfield played an important part in the air defence strategy of the United Kingdom during the Second World War. Initially Hawker Hurricanes were deployed at the airfield, alongside Bristol Blenheim night fighters. Hurricanes from North Weald saw action over the beaches of Dunkirk and played a key role in the Battle of Britain. The airfield was bombed by the Luftwaffe on three occasions during the Battle: on 24 August, 3 September and 29 October 1940, with considerable loss of life.

In 1941, two American Squadrons (71 and 121) flew Spitfires from North Weald. Between May 1942 and March 1944, and again in April and May 1945, two Norwegian squadrons (331 and 332) operated from the airfield. RAF fighter squadrons flying Gloster Meteors and de Havilland Vampires were based at North Weald from 1949 onwards.

The Hawker Hunters of the last front line combat unit (No. 111 Squadron RAF) left North Weald in 1958 and the RAF withdrew from the airfield completely in 1964. It was sold to Epping Forest District Council in 1979.

The North Weald Museum is home to many vintage aircraft including a Spitfire, Hurricane, Mustang, Kittyhawk, Dakota, Skyraider, Seafire, Harvard, Hunter, Venom, Vampire, Gnat, and Jet Provost. Surviving buildings include an original 1927 hangar and the former Officers Mess, now a Grade 2 listed building. The airfield itself was granted listed status in 2005.

The RAF North Weald Memorial, was dedicated in 2000 in memory of all those who served at North Weald. It encloses a granite obelisk unveiled in June 1952 by HRH the Crown Princess Astrid of Norway on behalf of the two Norwegian squadrons based here during the Second World War, in gratitude to the RAF, Station North Weald, and the people of the District. 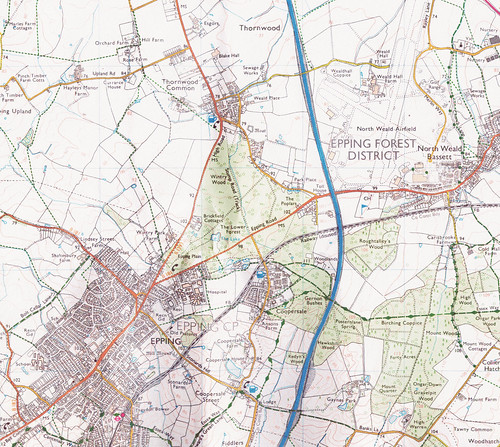 Like the airfield at Hunsdon, North Weald has been designated as the possible site for the development of up to 6,000 houses under the East of England Development Strategy. A request for public input in 2006 received more than 6800 objections and local residents continue to object strenuously against the proposal.