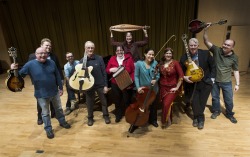 Musicians from across campus will take part in the fourth semi-annual Band on the MUN concert on Sunday, April 27, at 7:30 p.m. in the D.F. Cook Recital Hall, School of Music.

Guitarist Dan Dillon, entrepreneurship training co-ordinator for the Entrepreneurship Training Program for Career Development and Experiential Learning, School of Graduate Studies and the International Centre, began the pan-university initiative in 2011.

“I had been playing in bands for 35 years and wanted to do something musical to raise money for the food bank,” said Mr. Dillon. “It’s also nice to see another side of the people you work with. I was chatting with a colleague of mine, Tom Hennifent from campus enforcement one day back in 2011 and we were discussing ways that we could hold a food bank fundraiser. We worked together to create Band on the MUN Benefit Concert series. It has been a great success thanks to all of the talented employees from across campus and all of the generous individuals who have come out to the concerts in support of this important cause.”

To date, the band has raised over $4,000 for the campus food bank. Organizers welcome non-perishable food donations at the door but the cash donation is important too so that the food bank can purchase exactly what it needs. At the December 2012 concert, Mr. Dillon extended a corporate challenge. Dan Penney, president of Toyota Plaza in St. John’s, was in the audience and contacted Mr. Dillon to match the $1,500 take on the door for a total donation of $3,000.

“The university is such a wonderful community of giving – every department every week is doing something for community and beyond, which is a big part of engagement … we are always reaching out,” said Mr. Dillon. “This university was built on the sacrifice of so many people and Band on the MUN is a true testament to what we are as a community.”

The School of Music has waived the D.F. Cook rental fee for the evening and has donated the use of a sound technician and the Division of Marketing and Communication produces and prints the concert posters free of charge.

“We’ve had great support from everyone,” said Mr. Dillon. “We always get a good turn-out but I’d like to encourage friends, family, colleagues and people from outside the university community to attend.”

According to Mr. Dillon, the Memorial University food bank serves upwards of 3,000 clients from the university and wider community each year.

Musicians from across campus are taking part in the event, including representatives from Technical Services, Alumni Affairs and Development, the Faculties of Arts, Science, Education and Engineering and Applied Science, the School of Social Work, the Writing Centre, Facilities Management and the Department of Career Development and Experiential Learning. Several other performers will also join in, as will local television and radio personality Larry J. from NTV.

Rehearsals are ongoing and those attending can expect to hear an eclectic mix of folk, rock pop, jazz and classical music.

The event is open to the public, with tickets available at the door ($10). For more information please email ddillon@mun.ca.