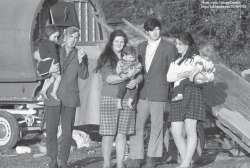 In the early '70s, anthropologists George and Sharon Gmelch (University of San Francisco) lived for one year in a barrel top wagon with travellers on a halting site in Dublin. Four decades later they returned to Ireland with an archive of photos to find the people they once knew to learn what has happened in their lives in the intervening years.

Join George and Sharon Gmelch for a screening and discussion of “Unsettled: From Tinker to Traveller,” on Tuesday June 10 in the Bruneau Centre's Innovation Hall. The film which explores the lives of Irish Travellers as it documents the researchers' return to Ireland to undertake their final "field study" with Ireland's nomads.

Hosted by the MUN Sociology Speakers Series and the On the Move Partnership, this event is free and open to the public