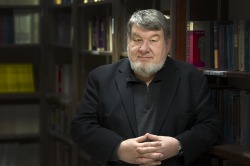 The curiosity of culture and repatriation of human remains are the focus of a special discussion next week highlighting a tragic chapter in Labrador’s rich history.

Memorial researcher Dr. Hans Rollmann will lead the discussion on Tuesday, March 22, along with Johannes Lampe, an Inuit elder from Nain. The event is part of Aboriginal Peoples Week: Truth and Reconciliation.

They’ll tell the heartbreaking story of Abraham Ulrikab, an Inuk from Hebron who—along with his young family and other Inuit—were enticed to Europe in 1880 with the promise of financial gain. Instead they became part of exhibitions in human zoos. Sadly, in a few short months all eight Inuit, never having been inoculated, died of smallpox.

“There were several institutions in which Inuit and people from other ethnological groups were exhibited to convey to the European public a picture of life and work in non-European ethnological locales,” said Dr. Rollmann, a professor in the Department of Religious Studies, Faculty of Arts.

“The first ‘animal park,’ as it was called, that Abraham visited was in Hamburg, Germany. Promoter Carl Hagenbeck from Hamburg had hired this group of Inuit from Northern Labrador and engaged in business with other similar institutions in Berlin, Prague, Frankfurt, Darmstadt, Krefeld and Paris.”

Much of these experiences were captured in Abraham’s diary, a perceptive and moving autobiography. A literate hunter and fisherman who was 35 at the time he left Labrador for Europe, Abraham’s entries were heartbreakingly clairvoyant.

“We will suffer a lot from homesickness, if what they tell us is true, we will go to Dresden, Paris, England and Vienna,” he wrote. “I will have faith in God here in Europe that nothing bad will come across that even the people that surround us all the time can’t harm us.”

“At the same time the diary is a witness to the dignity and humanity of Abraham.” — Dr. Hans Rollmann

There are also lessons to be learned.

“Here you have not a European but a participant view of such exhibits from the inside by a perceptive and educated Aboriginal observer and victim,” Dr. Rollmann pointed out. “It convicts the contemporary European culture of the shallowness of the educational and scientific relevance of such exhibits and of the inhumanity with which Inuit and others had to perform their roles in such ethnological spectacles. At the same time the diary is a witness to the dignity and humanity of Abraham.”

Dr. Rollmann and Mr. Lampe are featured in the documentary Trapped in a Human Zoo, which recently aired nationally on CBC Television’s TheNature of Things. The film explores Abraham’s experiences in Europe and follows Mr. Lampe as he literally retraces Abraham and his family’s footsteps along the “animal park” route, finally ending his journey in Paris at the Museum of Natural History where the Labradorimiut remains are kept.

“As Labrador Inuit, we feel we are descendants of Abraham,” Mr. Lampe says in the film. “Their remains could be taken back home. That would be something the Labrador Inuit would appreciate very much. To heal the ancestry, to heal the descendants, the children and the grandchildren.”

As part of the presentation on March 22, there will be a screening of the documentary and a discussion about returning the Inuit’s remains to this country.

In 2013 Canada and France signed an agreement to repatriate the human remains of Abraham and the seven other Labradorimiut back to Canada.

The presentation is one of the outcomes of the Tradition and Transition Among the Labrador Inuit, a $7.4-million five-year research project led by Dr. Tom Gordon, professor emeritus, School of Music, who will also take part in the discussion.

Admission is free and all are welcome.