Canadian politics and democracy in an age of image control 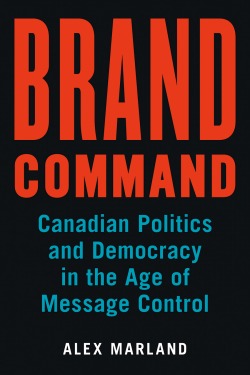 Canadian politics and democracy in an age of image control

The pursuit of political power is strategic as never before.

Ministers, MPs and candidates parrot the same catchphrases. The public service has become politicized. Decision-making is increasingly concentrated in the prime minister’s office. And a top-down chain of command has eroded public involvement in policy creation.

What is happening to our democracy?

To get to the bottom of these alarming developments, Alex Marland, associate professor of political science and associate dean, Faculty of Humanities and Social Sciences at Memorial, reviewed internal political party files, media reports and documents obtained through access to information requests and interviewed Ottawa insiders for his recently published book, Brand Command: Canadian Politics and Democracy in the Age of Message Control.

In the book, Dr. Marland argues that political parties and the government itself are beholden to the same marketing principles used by the world’s largest corporations. Called branding, the strategy demands repetition of spoken, written and visual messages, predetermined by the leader’s inner circle. Such disciplined practices have penetrated parliamentary democracy in Canada, facilitating a centralized style of political control that runs counter to fundamental principles of responsible government.

In the Stephen Harper era, nothing could contradict the brand, and hard-hitting communications denigrated opponents. Today, the tone of politics may have changed, but the same forces that centralized power in the prime minister’s office remain.

In Brand Command, Dr. Marland compellingly argues that public sector branding is an unstoppable force that will persist no matter who is in power. He warns that the disciplined communications so essential in today’s frenzied media environment create serious problems for parliamentary democracy that must be confronted. This book will fascinate anyone who is interested in how Ottawa works and where Canadian politics is headed.