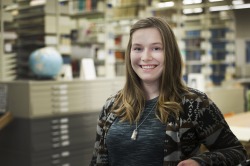 Ms. Morry, who is also working on a bachelor of science in earth sciences, has just begun a semester at the University of Washington.

The Killam Fellowships program provides an opportunity for exceptional undergraduate students from universities in Canada to spend either one semester or a full academic year as an exchange student in the United States. In addition to a health insurance allowance and the ability to apply for an in-country travel grant towards the costs of an educational field trip, students receive a cash award of USD$5,000 per semester or $10,000 for the full academic year, a three-day orientation in Ottawa, and a three-day seminar in Washington.

Ms. Morry is the president of the Memorial Archaeology Society and has spent two field seasons working at the historic site of Ferryland. During the school year she works as an archaeological research assistant in the Memorial Applied Archaelogical Sciences Laboratory and as a writing tutor at the Writing Centre.

“While in Seattle, I will be participating in a museum curation practicum course at the Burke Museum, the Washington State Museum of Natural History and Culture,” she said. “It will involve training in museum curation, conservation and cataloging as well as working independently on projects and assignments.

“It’s an exciting opportunity for me as I am very interested in public science communication and museum studies. I also plan on taking a mix of archaeology, geology and geography courses.”

Ms. Morry graduated from Prince of Wales Collegiate as class valedictorian with honours and a French immersion diploma. In university she has consistently made the Dean’s List and received many generous scholarships including the Dr. Leslie Harris Memorial University Alumni Scholarship. She presented a research poster analyzing osteological remains from an eroding site as a member of the Canadian Archaeological Association at their 2015 meeting in St. John's and plans on pursuing studies at the graduate level with a focus on geoarchaeology.

This year, Memorial University also played host to two American Killam Fellows, Bailey Anderson of the University of Texas, Austin, and Ivan Carlson from the State University of New York, Plattsburgh. Clare Churchill-Seder, a graduate student in anthropology and studio art from Brandeis University, was awarded a Fulbright Canada student grant to study and conduct research on Innu art at Memorial.