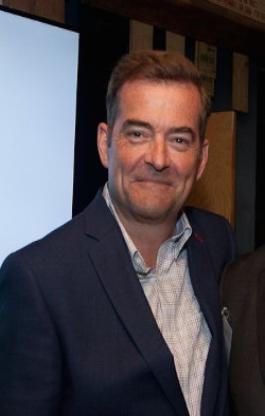 A nine-time Gemini nominee, Tom Harrington is the co-host of Marketplace, the CBC’s award-winning investigative consumer program. Spanning more than three decades, Tom has had a wide ranging career in both sports and news, covering eight Olympic Games. He’s also been a frequent guest host on CBC Radio’s The Current and As It Happens.

Tom earned a Bachelor of Arts in history at Memorial University and has a Masters of Arts in Journalism from Western University.

I graduated from Gonzaga High School in 1974 … back then it was boys only and high school ended with Grade 11. So I entered MUN at the age of 16!

Do any particular memories stand out from your time as an undergraduate?

In 1978, my fourth and final year, I was elected vice-president of the Council of the Students Union. George Wyatt, son of then St. John’s mayor Dorothy Wyatt, was president on that ticket. My proudest achievement was our referendum campaign for a new library. We advocated turning over the student union building fund to the university so the administration could push the province to financially support a new library which was desperately needed. We received an overwhelming YES vote and four years later, the Queen Elizabeth II library opened.

Were you involved in journalism as a student – how did you make the decision to move into that line of work and how did your arts degree equip you for your future career?

I didn’t get into journalism until I left Memorial. In 1980, I took a course in media and news from MUN’s Extension Service as it was called back then. It was taught by veteran journalist Robert Plaskin. One day he asked me to audition at CJYQ Radio in St. John’s and hired me. I worked there for a couple of months … reading and writing newscasts … before being accepted in the master of arts journalism program at the University of Western Ontario in London. As a history major, gathering and interpreting research was essential. Likewise in journalism, knowing where to look for information, understanding it then being able to coherently present it, is one of the cornerstones. Having a sense of curiosity doesn’t hurt.

What’s a typical day like for you at the CBC?

I’d like to say there is a typical day at CBC but there isn’t. When Marketplace is in production, I can be shooting interviews and scenes in the field one day, writing a script on another, working with a producer on a future story the next. Because we have two hosts and 20 episodes, I end up working on up to a dozen stories per season. The constant variety and intellectual stimulation makes the job an awful lot of fun.

How do you decide on the stories that Marketplace will cover? What’s your most memorable story to date for the program?

One of the program’s strengths is the audience because we rely on viewers and Canadians in general for many of our story ideas. Either through email or social media, many people see us as a place to get help or to seek justice. We can’t resolve everyone’s issues but if there is a critical mass of chatter about a particular problem, eg. a product, a company, a practice, our top notch research staff starts digging. As for a story that I’m proud of … there are many. But our report last fall on the weaknesses in the system that provides AED’s (defibrillators for people suffering cardiac arrest) in public places in Canada led many organizations and businesses to purchase and install these life saving devices. If you can do a story that could save one life, it’s very gratifying as a journalist.

You were a sports reporter for many years – how did that come about? Were/are you an athlete yourself?

I played sports when I was young, watched sports on TV and read about it. I was always fascinated by the human drama and how social change often had its beginnings in the world of sport. But I also wondered even as a teenager why sports weren’t covered like other kinds of information, given that so many strands of daily life … politics, health, business, labour, entertainment …seemed to be interwoven in sports. When I started at CBC more than 30 years ago, my objective was to treat sports like news. I’d like to think I succeeded.

What’s the biggest misconception the general public has about journalists?

It’s hard to know where to start on this one when you consider public opinion polls continuously find journalists near the bottom of the rankings of the most respected or trusted professions. But perhaps one major misconception folks have is that all journalists are cynical. So worn down by what they’ve seen and heard that they don’t believe in anyone or anything. I see myself more as a skeptic, always doubting but allowing for the truth to reveal itself and proving me wrong. I’ve been fortunate in my career to meet many people doing the right thing or people who’ve done wrong and are turning themselves around. Allowing oneself to believe that most people are essentially good is in my view, not inconsistent with being a good journalist.

If you mean entering journalism, there is no single “by the book” path in this profession though the growth of journalism degree programs might indicate otherwise. The most important prerequisite to me … is innate curiosity -- in people, in the world. That is essential no matter what your line of study may be. I think arts prepared me well but I have many colleagues and friends in the media with various degrees, from science to business. Just make sure you’re studying something you love because you’ll be better at it, be a happier student and more likely to make the right choice about your career path.

You’ve lived away from Newfoundland for 30 years now – how do you stay connected?

My family has visited often since I left and my oldest brother still lives in St. John’s. I’m also still in touch with some longtime friends there. In the past seven or eight years, I’ve also become involved with MUN Alumni, hosting events in Toronto and volunteering on the board of the local alumni chapter. My siblings and I have also made a tangible, long lasting connection with Memorial by establishing two academic awards in honour of our parents; a history prize named for our late father Michael Harrington and a music prize named for our late mother Katherine.

What are your thoughts on the ongoing CBC cuts and how they are affecting our national broadcaster?

When you’ve seen what I’ve seen in past 33 years, nothing surprises you. I was even a budget cut in Montreal almost 30 years ago. But I will say, I fear more now for the corporation’s future than I ever have.

You are very active with Memorial’s Toronto alumni community – why is it so important for graduates to maintain ties to Memorial?

Your university years play an enormous role in shaping the person you become. The influence of professors, making new friends, the expansion of your mind to new ideas and different ways of thinking … all happen when studying at university. An institution of that importance deserves support once you leave. Newfoundlanders and Labradorians are generous by nature so giving back in one’s time, resources or both, isn’t a big ask.

After I graduated, I was a salesman at Tip Top Tailors in Atlantic Place for about a year.

I’m a big fan of non-fiction and historic fiction and the list is long but I was very impressed by “Team of Rivals”, Doris Kearns Goodwin’s exhaustive but compelling profile of Abraham Lincoln and his cabinet during the Civil War. Lincoln is one my favourite figures in history.