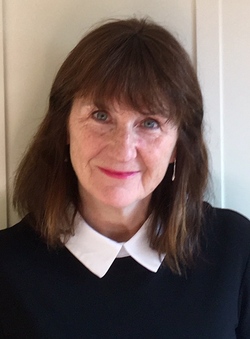 Damhnait Monaghan was born and grew up in Ontario and Newfoundland but now lives in the U.K. Her flash fiction has won or placed in various competitions and is widely published and anthologized. Her writing has been nominated for a Pushcart Prize, Best Small Fictions, and Best Microfictions. Her novella in flash The Neverlands was published in April 2019 and already has a second print run. It’s available from V. Press: https://vpresspoetry.blogspot.com/p/the-neverlands.html

Her novel Up She Rises was short-listed in the 2019 international Caledonia Novel Prize and is out on submission. She is currently working on a second novel and is also an editor at FlashBack Fiction, a literary journal that publishes historical flash fiction.

I’m originally from Ontario, but we moved to Newfoundland in 1973 when my parents separated. We left in 1975 so my mother could pursue graduate studies in Toronto, returning again to St John’s in 1977. After living in four different homes over four years, I was ready to stay put. While Memorial was therefore the logical choice, it was also a fantastic one. I threw myself into campus life and loved it so much that after graduating with my BA, I stayed on for another year, earning a BEd.

What drew you to do a degree in French & English?

I’ve always loved English and reading. As a child, I nursed a secret desire to write, imagining myself as Jo March (of Little Women) in her garret. But I had an affinity for French and that seemed a more practical choice in bilingual Canada. As a compromise, I majored in French and minored in English.

I joined The Muse in my first semester and absolutely adored it. The camaraderie was fantastic, especially on Thursday nights when we put the paper to bed. And seeing a byline on articles I’d written was always a buzz. I was quite active around the Thomson Student Centre, with various part-time jobs, and of course attended some fantastic concerts there. I also made great friends, some of whom I’m still in touch with over thirty years after I left Newfoundland.

I went back and looked at my old MUN transcripts and was reminded that I dropped Principles of Anthropology in my first year. I don’t remember why, but now the subject fascinates me, so I would take it again.

You are an award-winning writer and an editor and your website states you “particularly enjoy the constraints of very short word counts.” Can you explain your career trajectory/path?

When I left Memorial, I taught French for seven years (my first two in outport Newfoundland) before retraining as a lawyer. I then practiced law for ten years, first in Toronto, and then London, England. It was only after a career break, following the birth of my second child, that I began to write fiction. In some ways it feels like my career path was a detour from what I always wanted to do: write. The bad news is, it took me a long time to get here. The good news is, it’s never too late!

As for the constraints of short word counts, I have written novels, short stories and even the odd poem, but I’m addicted to flash fiction, especially micro fiction. I particularly enjoy the challenge of cutting a piece down, or carefully selecting words to meet a micro word limit.

You have lived in the UK for almost two decades – how did you end up there?

I followed an Englishman home. (We did date for a while first.) To quote that 10cc song, “The things we do for love.”

How did your arts degree prepare you for your life and career?

In my first year of teaching, I taught both French and English, neatly mirroring my university studies. After that I taught French immersion. Once I made a career change to law, being able to write critically was a definite asset. These days, I rarely have an opportunity to speak French, apart from helping my teens prepare for oral French exams, but my love of reading and writing remains a constant.

Writing. I’m thrilled with the success of The Neverlands and look forward to seeing Up She Rises out in the world. It’s a coming of age story about a mainlander who arrives in outport Newfoundland. (It’s inspired by my experiences teaching French around the bay, but it’s very much fiction.)

Not much. They’re entitled to their opinion.

This is such a timely question as my son is entering his last year of secondary school and is unsure what to do afterwards. He will take a gap year – a common occurrence in the UK. If he’s still unsure after that, I’d advise a variety of courses to see what sparks his interest. In my first year at Memorial, I took English, French, political science, psychology and even calculus (dropping the latter rather promptly when I floundered!) With such a wide array of options, the hope is that one of them engages enough for further study. But I’d also say meander, go off the path. A wrong turn might lead you to the right place.

Canada. I’ve returned almost every summer since I moved to the UK. Until recently we had a family cottage on a remote lake in Northern Ontario and I loved spending time there.

I read a lot of flash fiction, both as an editor for FlashBack Fiction and because I love the genre. But there’s also nothing like immersing yourself in a good novel. I’ve just finished reading an ARC of American Dirt by Jeanine Cummins (out in 2020). It’s about migrants trying to reach America and it slayed me. I’m now looking forward to Kate Atkinson’s latest Jackson Brodie mystery, Big Sky.

Sometimes I listen to music related to my writing. During my final edit of Up She Rises, I listened to Newfoundland traditional music because it’s a big feature in the novel. Right now, I have the soundtrack of the musical Hamilton on repeat. I saw the London production last month and was blown away. And I’m always up for some K D Lang.

June 2020! My two children have big academic years coming up – my youngest has GCSE (formerly O Levels) exams and her brother has A Level exams. It’s shaping up to be a stressful year, so although I don’t want to wish the time away, I look forward to celebrating the end of this double whammy.