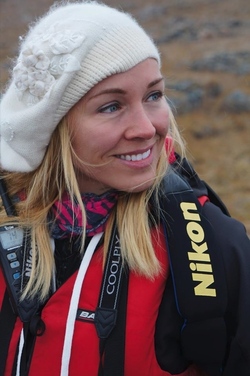 Bio: Latonia has a PhD in NL and Arctic archaeology. She is director of the Bird Cove Archaeology Project, Director of Archaeology for Adventure Canada, and President of AARA Inc. Latonia is also an award-winning filmmaker. Works created by her company, LJH Films, have been seen in over thirty countries. In 2010 she won Canada’s Outstanding Young Person Award, in 2015 NLAC‘s Emerging Artist of the Year Award, and in 2016 Hospitality NL’s Cruise Vision Award. For her work as a entrepreneur, researcher and explorer, she recently became the first NL woman inducted as a Fellow in the famed Explorers Club in New York City.

When I was 16 I saw the book Ancient People of Port au Choix in my school library. It was captivating, and written by Jim Tuck. I discovered he was a professor at Memorial, so I went there to study with him. He became a huge influence in my life and the way I practice my craft. I expected him to look like Indiana Jones because, like anyone, I had bias about what an archaeologist was. But he came to class in baggy jeans, a plaid shirt, and loosely tied up winter logans. But he was, without question, as charming as IJ.

Do any particular memories stand out from your time here as student?

I remember the sense of comradery the most. I lived in residence my first years at Memorial, in Squires House. There, I made friends with other rural NLers and people from all parts of the world. These friendships remain strong today.

What drew you to study archaeology?

The desire is so innate, and began so early, that I don’t remember why. I only remember that as early as the age of 7, I asked for children’s books about ancient Egypt. I remain constantly curious about the past cultural lifeways of people, and how understanding them is relevant for society today.

How did you go from a degree in archaeology to becoming a filmmaker and explorer?

Well, I am still a practicing archaeologist. My research station is in Bird Cove on the GNP…Archaeology is about people - why and how they do what they do. Filmmaking is similar. So the leap from archaeology to film is not far. I am using a trowel for one and a camera for the other. And both archaeology and filmmaking require a lot of travel, and research, so I am always going somewhere, and researching something, which leads to exploration.

“Just jump up and get at it”. Versions of this were said by my Grandfather Hartery, who passed at the age of 90, and my Grandmother Strickland, who is currently 90. They knew/know a lot about living well, and living long. So when I am pursuing an endeavor, I don’t dwell too much on whether or not I am ready for it. I just try to do it.

You were recently made a fellow of New York City’s famed Explorer’s Club – what did that mean to you?

I do what I do because I love it, not for accolades of course…but when they come, it’s always meaningful. It reminds you that your hard work is making a contribution, at least in one small corner of the world. And it inspires you to continue. I’m going to the annual gala for the club in March, which is kind of like the Academy Awards of Exploration. I am eager to go!

What does Newfoundland and Labrador’s place as a northern society mean/what is the impact?

Much of our province is Arctic, or Arctic like, because of the Labrador current. In the ancient past, indigenous people came from what is now Nunavut and lived here because NL/Nunavut share similar geography, climate, flora and fauna. But where it gets interesting is how long people stayed, especially on the island portion. In the past, after living here a thousand years, one Arctic group abandoned the island when the climate warmed slightly. So our unique northern, yet still southern, place has a lot to say about effects of climate change and how far a subsistence system can bend, before it breaks.

In a perfect world, what initiative (building, service, cultural offering, etc.) would you add to Newfoundland and Labrador (or St. John’s) to make it a better place?

I’d love to see an engaging interactive course in the high school system that outlines the 9000 year history of NL. And also shows that, while influential on who were are now as a people, the last 500 years, which is best known to the general public, represents only about 6% of our province’s story. The remaining 94% (not to reduce culture to numbers, but just as a comparison) is lesser known, complex, fascinating, and indigenous.

What’s a typical day like for you at work?

There is no typical day, they are all quite different. But there is a general pattern to my life. In Nov-April I am usually home planning. And from May to October, I try to be outside and as far North as possible.

Studying social science has made me appreciate the differences in people and culture, and diversity in the world. I greet each day with a genuine feeling of gratitude because my work in humanities has taught me, even with all its ups and downs, the world is an incredible place – and the human journey is profound. I’m a scientist too, with a back ground in chemistry, but for me, the calm way I interact with the world, stems from work in the arts. And that’s invaluable.

That being unsure is perfectly ok. There is a lot of excitement and value in exploring options.

Reading: Have a classic open at the moment...Voyage to Greenland by Frederica de Laguna (1929).

Listening: A podcast called You Must Remember This by Karina Longworth

Looking at: RBG, the new 2018 documentary about Ruth Bader Ginsberg

I’m releasing my first feature film on September 15th, at the FIN: Atlantic International Film Festival Gala in Halifax. I co-directed it with 5 other women from NL/NS. I’m thrilled to share it with the world. I am also working on the Labrador Doc Project with the NFB over the next year, producing 4 films directed by Inuit artists. Next summer, I am going back to my research station with my team for a month. If hiking, rare birds, rare plants, music, great food, bountiful wildlife, and 5000 years of history interests anyone – please come see us!