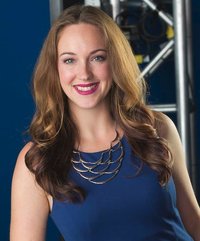 Amanda Mews is the entertainment and community reporter with NTV News in St. John’s. She has also hosted events for the Big Brothers Big Sisters, and Mighty Girl Day. She started her journey to journalism at Memorial University in 2004, finishing with a Bachelor of Arts in 2009. She studied English with a specialization in theatre/ drama, and minored in Psychology. Along with her degree, Amanda also completed the Diploma in Performance and Communications Media. Always eager to learn new things, Amanda is currently taking a psychology course at MUN, while working full-time. She is also a competitive rower with the Royal St. John’s Regatta, her team placing third in the Regatta Championship Race in 2016.

I decided to attend Memorial University while I was still in high school. I toyed with the idea of studying elsewhere, but always came back to MUN. I was impressed with the vast breadth of courses offered, and one thing that really stood out to me was the Theatre/ Drama Specialization within the English major. I have always loved language and theatre, so the idea that I could study them both together, was the deal breaker when it came to MUN over other universities.

Do any particular memories stand out from your time here as student?’

When thinking back on my time at Memorial University, certain professors stand-out in my mind. I remember being a little intimidated when I first stepped foot on the St. John’s campus, coming from a small town of less than 600. I remember sitting down in my first English 1080 class with Professor Nava Bobby, and just being captivated by her intelligence, and excited energy. I looked forward to her class. No question was out of bounds or went unanswered. I didn’t have many female teachers in high school, and I remember being so inspired by Prof. Bobby. I knew no matter where I ended up (I was thinking about pursuing Education at the time), Literature had to play a big role in my education. I finally chose psychology for my minor, but explored business and religion as possibilities. I remember Dr. Hans Rollmann (now retired) in the religious studies department, as another inspiring figure during my studies. I remember doing a project on the 18th century religious play “Nathan the Wise”. I would drop by his office to discuss the assignment, and he would get so passionate about it, and we would just get completely lost in the conversation. His knowledge is astounding.

I have always had a love of creative writing, poetry, and the English language. When I first started at Memorial University, I was planning on becoming a high school teacher, with the hopes of teaching literature and theatre. So, what really drew me into a degree in English was the Theatre-Drama Specialization. From the first course towards my specialization, which was Critical Reading and Writing in Drama, I fell in love. After I finished my English degree in theatre/drama, that love of theatrical plays led me to pursue a Diploma in Performance and Communications Media, offered through Memorial University.

How did you land your job at NTV?

When you get right down to it, my pursuit of an English degree was because I love writing and telling stories. I love telling people’s stories. When the opportunity for a work placement in the English 5000 course came up, I asked to be involved in journalism. I was taken in as in intern with NTV News in the Spring of 2009, and was submerged in the fast-paced environment of a real newsroom. I was hooked. My first writing gig didn’t start until I was hired as a production assistant that summer. I began by researching, writing and editing the Across the Province feature of the (then) new show, NTV News: First Edition. From there, I tried my best to learn everything I could about the industry, technology, and equipment. I went on to fill-in as a weather presenter, write news copy for Ozfm, and finally I began producing my own daily community feature, weekly entertainment feature, and half-hour show! I am extremely thankful for the opportunities I have been given. The best thing is, I am never bored with what I do. There is always something new to learn, and a skill on which to improve.

I have been blessed with some amazing mentors. One piece of advice that sticks out is, “keep it simple”. Sounds easy, but it can be the most difficult thing to do when you’re writing a story. I was told that you can lose the viewer very quickly, and cumbersome details can get lost easily in television. People aren’t reading what you’re writing, they’re listening to what you’re saying. It’s important to remember that viewers can’t go back and re-read what you wrote if it sounds confusing. You have a maximum of two and a half minutes to tell a story. Every word needs to count.

What’s a typical day like for you at NTV?

I start the day by writing or editing entertainment stories from that morning, and record Entertainment Checkpoints that air throughout the day on NTV. Then, sift through the requests for community events and entertainment stories. I line-up future interviews, and set out on a shoot that I lined up in advance. I love this part of my job - meeting people. I get to meet incredible people, and share their story.

Once back at the NTV Newsroom, I edit my story. I write to the visuals I’ve captured, and turn it into either, Backstage Pass, Your Community or Across the Province features, that will air during the NTV News - typically, that evening. I chat with reporters to find out the biggest stories of the day, and write the Ozfm Headline News, as well as the Entertainment Minute. Once a week I produce a half-hour show called Entertainment News. It’s a mix of local content, and notable entertainment news happening worldwide. On Fridays, I have a bit of fun and put together Gone Viral, for the Sunday Evening News.

My biggest professional challenge so far has been to separate my feelings from my work. My interviews sometimes go way too long because of my personal curiosity, which in turn makes editing a two minute report very difficult. I have also learned how not to be “married to my work” as one mentor calls it. You may write something you love, and have all kinds of beautiful language in there, but sometimes that can distract from the story. I may also get so wrapped up in a story, that I need an extra set of eyes and ears to help me edit it down. Being able to step away and make sure that what you see as important, and what the viewer sees as important, are the same thing.

In a perfect world, I would love to see a more social approach to mental wellness in the province. I think programs focusing on art, drama, and music therapies would go a long way in helping people who battle with mental illness. We are a people steeped in culture, who I believe, are some of the most creative people on the planet. I think to battle the epidemic of mental illness, we need to use creativity as a therapeutic tool, along with more traditional clinical methods. I think art therapies could also be expanded to help our most vulnerable; putting programs in place for seniors, and low-income earners. Through the years of interviewing artists of every genre, I’ve learned that there is healing in art. Music, visual and performance art, along with the written word, bring us together and help form our collective identity, as well as build our individual confidence. I believe utilizing art therapies more in the province, would propagate a happier and healthier population.

Completing a Bachelor of Arts degree in English and psychology, has helped me tremendously not only in my career, but in life. I have learned the art of time-management, research, and how to be open to both sides of a debate. Throughout my degree, I have studied political science, business, religion, and history, on top of psychology and literature. That’s a pretty broad scope, and the beauty of a BA. A Bachelor of Arts gives you the opportunity to open your mind to whatever interests you, while broadening your awareness of the world around you. You are equipped with tools that help you examine and investigate global and social issues, as well as provided with the keys to personal development. To anyone who questions the value of a BA I would say, “Show me a more rounded person than one with a BA. Show me a degree that offers you a more diverse career choice”.

The advice that I would give a student who is unsure of what to study, is that nothing is wasted. The great thing about Memorial University is that first-year students have a great selection of courses to choose from. You don’t need to know your career path right away. Take some time to try a few different subject areas that you haven’t been exposed to before, and see how they fit. You may surprise yourself.

My favourite place to visit is still home. I spent much of my life in Birchy Bay, and there is a certain type of peaceful melancholy that I can only find there. It feeds my creativity, and just reminds me to slow down and enjoy life.

Being an entertainment reporter means I get to submerge myself in local art! So, right now I’m listening to Cabbages & Kings and The Once’s latest album. As for books, I’m currently reading The People Who Stay by Samantha Rideout. If there’s one thing I’ve learned since working at NTV, it’s how much raw talent we have in this province. I’m amazed at the number of CDs, books, and art exhibit invites that come across my desk in the run of a week.