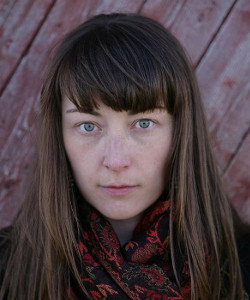 Megan Gail Coles is a graduate of Memorial University of Newfoundland and the National Theatre School of Canada. She is co-founder and co-artistic director of Poverty Cove Theatre Company. Her plays in progress include Building Houses and Wasting Paper. Her completed plays include Falling Trees, Grace, Squawk, Bound, The Battery and Our Eliza. Her debut fiction collection, Eating Habits of the Chronically Lonesome, won the BMO Winterset Award and the Margaret & John Savage First Book Award. She was most recently awarded the Writers Trust of Canada 5x5 prize. Megan is originally from Savage Cove on the Great Northern Peninsula of Newfoundland. She currently resides in St. John’s where she works at Breakwater Books, is artist-in-residence at the Arts & Culture Centre and a fiction editor for Riddle Fence. Falling Trees opens at the Barbara Barrett Theatre on December 9th..

My cousins, Ramsey and Sherri, were attending MUN. I traveled with one or both of them my entire life and was not ready to alter that course at 17 years old so we all went together. In many ways, I am still reluctant to alter that course but life has a way of keeping your favourite humans elsewhere.

I was always studying English. I just didn’t tell anyone. I told everyone I was studying biology instead because people thought smart girls should become scientists. I actually kept this façade going until I reached Invertebrates. Inverts solidified my abandon. The labs killed me. And many a locust. Their legs keep moving long after you’ve slit them down the backside. Now, I’m a writer who watches swarms of nature documentaries. But not the ones about insects. Yuck b’y.

No particular memories. Rather, the abundance of compromised memories stands out. I was a bit of a delinquent student when I first got off clear of my parents. Most bay kids are, I think. I went to a scattered party. I was young. It was fun most of the time.

Inverts. So I could ace it because I am that stubborn.

Gerard Collins told me something I had written was publishable and to “put in the time.” Jean Guthrie gave me books and said “like this Megan.” And Mary Dalton once administered a stern talking to about “wasting potential.” Very impactful and necessary advice when you’re nineteen and wild as a March hare.

Your working life has focused on the arts. What is it about theatre and literature that appeals to you so much? Did you have an “a ha” moment that influenced your decision-making in terms of career?

I’m passionate about art across the spectrum. Literature, theatre, music, visual art, poetry; I adore it all. I’m convinced art communicates our shared humanity. Like a language we all inherently know even if some speak more softly than others. Not me though. I roar.

Your day job is sales and marketing at local publisher Breakwater Books – what’s a typical day like?

My typical day is pretty atypical. Consistencies include: work, apples and Roxanne. Roxanne is my poodle. I love dogs.

What in your opinion is something the province of NL can do right now to improve the situation for artists?

Increase arts funding and pay for art. Dominion does not accept “exposure” as viable payment. And neither should our artists.

You are a writer and a playwright and currently the artist in residence at the Arts & Culture Centre and have had significant success with your book The Eating Habits of the Chronically Lonesome (winner of the Winterset Award) and your work in theatre. How does your family view your career choice and how do you deal with the unpredictability of life as an artist?

My family is used to me. They’re resigned to it now. I cope with unpredictability by having contingency plans. Great reams of them. Which I review in minute detail with my friend Maria. Everyone should have a Maria.

I was obsessed with Masters of the Universe as a child. My little sister’s name is Teela after He-Man’s girlfriend. It was that or the hospital could keep her. Adamant does not do seven-year-old Megan Gail Coles justice. I was decisive at an early age.

Every book published in Newfoundland this year. I’m on the Winterset jury. A bunch of plays in development for my playwriting unit at the ACC. I listen to Radio 2 in the morning. My every day musical taste relies heavily on my emotional current. Melancholy indie. Synth rock. Stuff like that. I’ve even been caught singing pop songs in the car. That new Adele song makes us all crazy, doesn’t it? I judge the state of my newly single friends based on how often they reference it on social media.