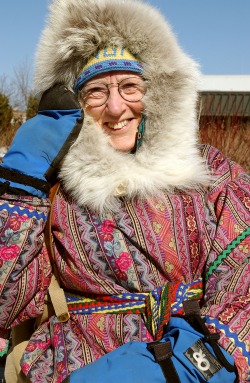 Dr. Jean Briggs has led the kind of life that a movie could be made of.

Dr. Briggs spent several years early in her anthropological career in two remote Arctic camps, documenting behaviour, language and customs of the Inuit people who lived there. And for three and half decades, while a faculty member at Memorial, she lived happily alone in her home on the Cape Spear peninsula without running water or road access.

Before she left for her Arctic fieldwork in 1963, two anthropologists who had conducted research in more or less the same area – and a number of other colleagues too – warned Dr. Briggs of the difficulties she would encounter.

“Everybody except my family thought I was mad,” she said. One distinguished anthropologist told her: “You are a very heavy responsibility.” Another, when she asked for advice, said dramatically: “The cold is vicious, and the dark is vicious, and if you survive you will be the woman I admire most in the whole world.”

Needless to say she survived. After spending several years living as an adopted daughter with one small group of Inuit, and informally attached to a family in another camp, both in what is now known as Nunavut, she wrote two groundbreaking anthropological books: Never in Anger  (1970), which was predicted to be a classic before it was published and Inuit Morality Play (1998), which won two awards on publication.

Dr. Briggs’ years in the North were spent primarily observing the women and children of the communities. She focused on the vocabulary of emotion, the ways in which emotions organized social life and how children were raised to think and feel like Inuit.

“Originally,” she recalled, “I went to the first camp to study the social lives of shamans, but no one would let on that there even was a shaman. They were newly minted Anglicans. So I just wrote down everything that happened and since I was a woman, staying at home with the women and children, what I saw was mostly how women and children interacted. And as I began to learn the language, I learned a lot of the emotion words they used, and discovered many differences in the way they thought about emotions, compared with us. Then, very soon, I became a social nuisance, because I didn’t know how to behave or express my feelings – and I began observing how people interacted with me.”

Her work on the Inuktitut emotion words ultimately grew into a major Social Sciences and Humanities Research Council-funded project to document the Utkuhiksalingmiutitut dialect of Inuktitut, the speech of the first camp she lived in.

The 84-year-old professor emerita at Memorial is currently preparing to publish the first of two Utkuhiksalingmiutitut-English dictionaries (one for word bases and one for postbases or suffixes). This previously undocumented dialect might have been lost forever if not for Dr. Briggs’ preservation work.

“Very few of the Utkuhiksalingmiut who speak the dialect I recorded in the camps of the 1960s remain, and those that are still around are forgetting the words they used to know but no longer use – for example, the words for traditional activities and tools,” she said.

The dictionaries are an important part of Inuit cultural heritage and will make a major contribution to both the theoretical and practical study of Inuktitut. As Inuktitut is one of the three official languages of Nunavut, the dictionaries are of great interest to the territory’s government, which is actively trying to preserve Inuit cultural heritage.  Materials in all dialects of Inuktitut are needed for the use of the civil service, interpreters, translators and Nunavut residents in general.

Dr. Briggs’ first lessons in Inuktitut were given her by a missionary she met in an airport on her first Arctic field trip back in 1960; he was engaged in translating the Bible into Inuktitut.

“The translator demonstrated what non-English sounds to listen for, and gave me clues about how the Inuktitut language was put together,” remembered Dr. Briggs. “This was very helpful, as Inuktitut is so different from English.”

Different is perhaps a bit of an understatement. In Inuktitut, every verb is the equivalent of an English sentence. For example, the verb qupannuaq-paaq-r^uaq-hiu-qati-gi-juma-ngngit-taatigu-lluunnii-nnguq is translated as “They said they didn’t even want to come hunting little horned larks with us.” This word consists of a base (meaning “little horned larks”) and 10 postbases (suffixes), each being the equivalent of one or more of the other English words in the sentence.

The about-to-be-published postbase dictionary analyzes the forms, meanings and conditions governing the occurrence of the approximately 360 suffixes that carry a large part of the meaning of an Utkuhiksalingmiutitut word.

Over the years, Dr. Briggs and her co-investigators have entered approximately 34,000 complex Inuktitut words, taken from everyday speech and preserved in tape recordings and transcriptions, into a database to construct the dictionaries. The database will be archived online and will be available in CD format for public use.

As an anthropologist, Dr. Briggs had never intended to write a dictionary. During the late 1960s, Memorial linguist Larry Smith, whose specialty was Labrador Inuktitut, urged her to make a list of the suffixes in Utkuhiksalingmiutitut.

“Larry said, ‘Nobody knows what the suffixes of that dialect are, so please write them down,” said Dr. Briggs.

There are between 300 and 400 suffixes in any dialect, says Dr. Briggs.

“So the dictionary began as a list of suffixes but it grew like topsy. I don’t remember how I got into my present pickle of writing two dictionaries!”

Dr. Briggs’ friend and colleague Dr. Marguerite MacKenzie, a professor in Memorial’s Department of Linguistics, calls her, “a trained anthropologist and a practising linguist.”

Dr. Briggs is also a committed environmentalist who doesn’t like to see other houses from her windows – so much so that, for 35 years, she lived in the middle of the woods near Maddox Cove on a part of the Cape Spear peninsula.

“I loved it because you couldn’t see anything that wasn’t beautiful from the windows – woods or bay or ocean, nothing was visible that was ugly.”

She finally sold the house in the woods - which she affectionately calls “the Treehouse” - and renovated a nearby Maddox Cove house which she’s dubbed “the Shoe,” after the Mother Goose rhyme. Dr. Briggs sold the land she owned around the Treehouse and along the Maddox Cove coastline to the Nature Conservancy of Canada. This land, which includes the Maddox Cove access point to the East Coast Trail, is now protected from any development in perpetuity.

Dr. Briggs’ last trip to the North was in January 2012, after an absence of 10 years. She and a dictionary colleague went to Gjoa Haven, a hamlet in Nunavut where the Utkuhiksalingmiut have now settled, in order to introduce the dictionaries to her Utkuhiksalingmiut family and friends, to consult them about what they wanted to call the dictionaries and what layout and Inuktitut spellings would be most useful to them.

One of Dr. Briggs’s Utkuhiksalingmiut sisters, now a middle-aged matron who was two or three years old when Dr. Briggs first lived with her family, commented: “Now I understand what you were doing!”