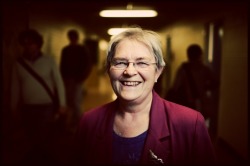 All language is inextricably tied to culture. In the case of Aboriginal culture, the loss of language becomes a loss of laws, literature, songs, proverbs, wisdom, cures, prayers, an entire way of life. And so the loss becomes a loss for us all.

On Tuesday March 22, as part of Aboriginal Peoples Week, Dr. Marguerite MacKenzie and her colleagues from Memorial’s linguistics department will address issues around language loss and revitalization efforts.

Memorial’s Department of Linguistics has had a focus on Aboriginal languages from the early days of the department, which was established in 1968. In the mid-1960s Dr. John Hewson (now a professor emeriti and Henrietta Harvey professor) began documentation of Mi’kmaq on the island with speakers of that rapidly disappearing dialect and on Beothuk manuscripts, followed by work on Innu-aimun (then called Montagnais) and the ancestor language, Proto-Algonquian. At the same time Dr. Larry Smith worked with speakers of the Labrador dialect of Inuktitut and in the 1970s Dr. Sandra Clarke (now University Research professor) began research on Innu-aimu.

As the recipient of the 2013 SSHRC Insight Award, Dr. Marguerite MacKenzie has enjoyed a 40 + year career in capacity building in Cree, Innu and Naskapi communities. Her collaborations with other researchers and governmental departments have led to the creation of dictionaries (including a comprehensive pan-Innu dictionary found at www.innu-aimun.ca/dictionary), workplace vocabularies and readers for schools, as well as language-learning materials for adults.

According to Dr. MacKenzie, sending young children to residential schools had been a major cause of the current endangered situation of Aboriginal languages in Canada. Newfoundland and Labrador is an interesting example for linguists, she says, as the full range of language loss is represented here from extinction (Beothuk) through threatened (Innu-aimun).

Dr. MacKenzie describes the Innu language in Labrador as “superficially healthy,” meaning that while children in the Aboriginal communities can be heard speaking Innu-aimun in everyday situations, recent studies have shown that there is a loss of vocabulary and grammatical complexity.  According to Dr. MacKenzie, English vocabulary is creeping in and the sophisticated and complex ways of forming words, typical of Aboriginal language, are being simplified.

A bit of background:

Aboriginal languages form words the same way all other languages do -- by adding prefixes and/or suffixes to stems. Some Aboriginal languages have sounds that are rare in the world’s languages (like the voiceless L sound in some varieties of Inuktitut, which also occurs in Welsh, where it is represented by a double LL spelling), and all have some fairly common sounds (like the vowel ‘aaah’).

Chinese is at one extreme end of the spectrum with only a handful of suffixes.  Aboriginal languages, similar to languages such as Turkish and Icelandic, have long words with a high ratio of morphemes per word.

For example “nunasiutikutaakkuurniarnasugivalauqsimanngitsiamiarmijungaliptauq” (Inuktitut, probably from Baffin Island, 65 characters) roughly translates as “I had also never once thought that I would ever travel on a train before.”  The 61 character Mohawk word “teienonhsa'tariha'tahkhwahtsherahon'tsistahstarathe'táhkhwa'” translates as  “black stove polish.”

Therefore many Aboriginal languages typically express in a word what is contained in a sentence in languages such as French and English.

Without elders to share traditional stories or explain the context of complex words, children develop different vocabulary and the grammatical structure is vulnerable to change. Dr. MacKenzie’s work with Mamu Tshishkutamashutau/Innu Education (MTIE), the Labrador Innu School Board has allowed for the documentation of the Innu language and has transferred it to other mediums such as dictionaries and other language resources (computer games, apps, posters, videos, etc.) for use in language teaching programs.

All languages change and morph over time but according to Dr. MacKenzie, the pace of change for Aboriginal languages has increased alarmingly.

“Well-meaning caregivers realize that young people need to speak a majority language to get paid work and often change the focus at home away from speaking their Aboriginal languages, which then has a snowball effect down the generations,’’ she said.

Acquisition research examines the way children learn language and can influence how language is taught. According to Dr. MacKenzie, oral language is primary for all languages, not just Aboriginal ones.

“Success in school is important to parents and a main lesson is that young children need face-to-face conversation with older speakers in order to develop the oral language skills of vocabulary and grammar. There is an expectation of a base level of vocabulary and familiarity with print for all children entering kindergarten. Children in well-off and urban environments may not have problems with this, but it is not the case for a great many families in other situations,” said Dr. MacKenzie, adding that family, community and larger social factors play an important role in the degree of success or failure when it comes to learning languages.

“I was looking for a thesis topic which include field research. Anthropologists in the McGill Cree project thought it would be useful to have a colleague who spoke the language and suggested I go to Mistissini, a Cree village in northern Quebec.”

Her work with the Cree led to working with the Amerindianization of the School project that was designed to bring language teaching into the federal schools in Quebec. Dr. MacKenzie delivered courses in grammatical structure as part of the teacher training certificate program to Cree and Naskapi student from Quebec as well as English-speaking Innu students from Labrador.

“Working with the students, who were usually middle-aged speakers put into classrooms without a program or teaching materials, we began the development of much needed resources, including dictionaries. Forty plus years later there is still a great deal of documentation to do, including the preparation of Aboriginal second language programs as children now enter school speaking their own tongue less and less fluently.”