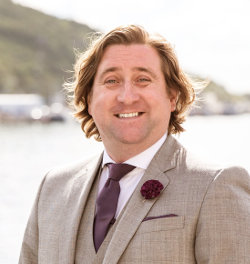 Dan Meades is originally from St John’s, NL where he studied English and Business at Memorial University before starting his career in community development and poverty reduction. Dan’s work has led him throughout Canada, Europe, the United States and West Africa. Currently Dan is the provincial coordinator of the Transition House Association of Newfoundland and Labrador, an organization that supports shelters for women and children fleeing violence in Newfoundland and Labrador. Dan is also the Co-Founder and creator of The Third Place Tonic, a company that manufactures small batch artisanal tonic water and ships it through Canada. Dan lives in downtown St. John’s with his wife Megan and his daughter Charlie.

The decision to attend Memorial was one of convenience, with a great school so close to home it seemed like an easy choice. I grew up in Mt. Pearl and my older sister attended Memorial as did my father so it seemed like a natural progression from high school.

My time at Memorial was formative in many ways, many of the people I hold dearest in my life I met at Memorial, including my wife Megan. During those years my entire life revolved around the campus: I studied, worked, partied, loved and learned all at Memorial. There are few meaningful memories from that part of my life that did not happen there.

My father was a high school English teacher and my mother was and is exceptionally well read. To keep up in conversation and get the jokes around our kitchen table you had to learn to love two things: good writing and politics. I was not a great student, I was not even a good student, but English was something that got me interested. I think reading something exceptional is like having a conversation with someone who is exponentially smarter than you are, I am not sure how you could help but be drawn to that.

How does your study of English inform your current position working for a non profit and as an entrepreneur?

I learned to communicate by studying English, and I learned to construct a logical argument. It’s a little abstract and nerdy but I can remember when Plato’s Republic was assigned as reading in an English course taught by the wonderful professor Pat Byrne in my third year. I read about the ideals of fairness in Plato’s idea of a nation and those ideas informed my interest in things like a living wage.

I had a great mentor named David Daughton - he was the person who gave me my first real job out of university. I was doing community economic development work and in many ways that is what started me down the path of doing poverty reduction and housing work. David is still a very close friend of mine and he once explained to me his philosophy around work. He told me that he had a number of diverse interests and he spent his time on those things that excited him, he did those things no matter if he was getting paid for them or not. As his career changed and evolved over time he periodically got paid to do each of them but it never really changed how he spent his time. I have tried to do that. I like working on a bunch of different sorts of things, poverty reduction, housing and homelessness, making music, writing, food and drink, speaking on community change, politics. At various times I am paid to do any number of these things but it never changes the fact that I am pretty well always spending some time on all of them.

You spent time working in Africa – how did that come about?

I had just finished my degree at Memorial and I was hired to work for the Canadian Co-operative Association to work on a number of United Nations sponsored projects in west Africa. We did work around HIV AIDS clinics as well as micro-lending through the credit union movement to try to break the cycle of poverty for women. I was lucky to spend time in Ghana, Cote D’Ivore, Liberal, and Sierra Leonne doing that work.

In the last year you became an entrepreneur with the launch of The Third Place Tonic. How did you get interested in food and drink?

I really enjoy good food and drink, and it’s such an exciting time for that part of our city. St. John’s really is a leader in Canada and around the world in the food scene right now. I’ve always really enjoyed gin and tonic - that crispness and bitterness of a proper G&T is a pretty remarkable thing. A couple of years ago I started playing around with cinchona tree bark and trying to extract the quinine from it. Quinine is the most important ingredient in tonic and standard grocery store tonic waters use chemical quinine which doesn’t taste very good. My old friend Kris Smith and I launched The Third Place Tonic last October and we have been growing ever since.

You work for a non profit and you’re now also an entrepreneur. How did your humanities degree/studying English prepare you for your current working life?

Studying English can allow you to see from other people’s perspectives and learn lessons beyond your own experiences, I think that informs how I try to advocate for vulnerable populations. Thinking about your community as it could be instead of as it is can be very valuable and there are lots of wonderful thinkers and writers that I studied at Memorial who have certainly done a better job of thinking about those things than I ever could.

Doing poverty reduction work means you are trying to fix a problem that has been around for a few thousand years. It took a long while in my career, and my life, to be a little more patient. Anything is possible if you think on a long enough time line.
In a perfect world, what initiative (building, service, cultural offering, etc.) would you add to St. John’s to make it a better place?
Newfoundland and Labrador needs an organization that is not funded by government to critique public policy. Some communities outside Newfoundland and Labrador have social planning councils, others consider these sort of places to be think tanks. We don’t have either and I think what is really lacking in NL right now is an independent organization that can do good research and show what the impact of policy decision would be on vulnerable populations and to express thoughtful alternatives.

I think it is an old argument to question the value of an arts degree, I have not heard that expressed in a long time but if I did I would happily buy them a copy of Oscar Wilde’s The Picture of Dorian Grey and suggest they read the preface. Wilde both makes and simultaneously destroys the argument in the line “all are is quite useless” and those that immediately precede it.

I think I would say “congratulations”, they are probably a pretty interesting person who is willing to admit that they don’t have all the answers. I think it is good to try a bunch of things in university, go talk to professors and sneak into lectures of things you might be interested in. Figure it out as you go.

I have always said that the world is too big to go to the same place more than once, except Italy, Italy is magical. They have all the right things figured out, love and sex, food and wine, and especially time. Italian culture really knows how to value time.

I have been listening to a lot of The Tragically Hip lately. They just started their final tour and its been sad and fun to rediscover the genius of Gord Downey.

Last year Milan Kundera released what many assume will be his last novel and so I took that as a spark to go back and re-read his cannon. I started with The Joke and have been working my way though in chronological order. Currently I am on Immortality, It is exceptional.

I have a little girl now, a daughter named Charlie, and she will be about a year and a half old when Christmas rolls around this year. I am really looking forward to Christmas with her, I think she is going to have a blast.

I am also really looking forward to seeing what happens with The Third Place Tonic, we have been growing so quickly and having so much fun that I just cannot predict what will happen next with that project.