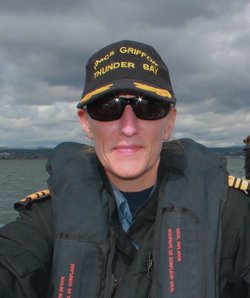 Michele Tessier was born and raised in Grand Bank, NL. She graduated with a Bachelor of Arts in English from Memorial University in 1996 and later the same year joined the Naval Reserves at HMCS Cabot in St. John’s. She is currently a commander in the Royal Canadian Navy (RCN) based out of Victoria, B.C. She recently received the honour of a second naval command and will captain the HMCS Margaret Brooke, the RCN’s second arctic offshore patrol vessel starting in 2018.

I didn’t know what I wanted to do when I first started at Memorial. In fact the (then) mandatory first year general studies was probably a really good thing for someone like like me as it showed me where my strengths were and, more importantly, what I enjoyed doing. I had been involved in theatre/drama in high school and loved to read, so the humanities and social sciences were a natural draw.

How did you get first get involved with the Canadian Navy?

Both of my younger sisters were sea cadets, but I was involved in so many other things that I never had time for it. I’m a little Type A – I like structure and discipline, so I had considered the military in my youth, but it wasn’t until I met a number of non-commissioned members (NCMs) who were attending the Marine Institute that I gave it serious consideration. A conversation with one of those members introduced me to the Naval Reserve so I decided to give it a try to see if I liked it. I never imagined it would lead to a full-time career, let alone command at sea!

How did you go from a degree in English to your current position as a naval commander?

I enrolled in the Naval Reserve at HMCS Cabot just as I was finishing my BA. That summer I went to Chilliwack, BC for basic officer training and then onto Victoria to start my naval training. I returned to Memorial in the fall of that year with the intention of starting a second degree in business but quickly realized that the Navy was the structure I was looking for at that time. I completed my training and took an employment opportunity in a ship in 1998 and worked my way through various officer positions until I finally achieved command.

Is there a typical day on board ship?

Always and never! The ship’s schedule is very regimented – timing is everything. In a typical sailing program you are woken up at 7 am and someone tells you when to eat, when to clean, when to work, and even when to relax! But the work day itself varies depending on the ship’s mission, which is one of the great things about this job – no two days are ever the same.

I understand having a second command isn’t something that happens very frequently – can you explain the concept?

Two command tours at sea in your career is fairly rare in the RCN. I had my first command from 2010-2013, which was the coastal defence vessel HMCS Nanaimo. Shortly after that I was fortunate enough to be given command of a “stone frigate” – HMC Griffon, the Naval Reserve Division (NRD) in Thunder Bay, Ontario. An NRD is actually a building, but it holds the Queen’s commission just like a commissioned sea-going ship, and has a complement of officers and sailors who fill essentially the same roles they would at sea. My current position, Commander of Coastal Forces Pacific, is also a command appointment, but again, I am just driving a desk. It’s with the HMCS Margaret Brooke, one of our new arctic and offshore patrol vessels, that I will have my second sea-going command.

One of the reasons I am getting this opportunity is because it is a brand-new class of ship; no one has sailed in these before, so the initial command appointments tend to be “second drives.” The Navy is looking for experienced commanding officers who know what to look for in trialling a new ship.

What are your feelings on having command of the HMCS Margaret Brooke in particular?

The honour of being the inaugural commanding officer (CO) of a new ship is humbling, but learning about Margaret Brooke gives this command a lot more meaning.

Margaret was a nursing officer during WWII. She was onboard the SS Caribou when it was torpedoed by a German U-boat off the coast of Newfoundland, near Port aux Basques (where I lived briefly as a young child). Margaret was appointed a Member of the British Empire (MBE – military) for her “gallantry and courage whilst in the water in attempting the save the life of another Nursing Sister.” She eventually retired from the military as a lieutenant-commander and returned to the university of Saskatchewan where she earned a doctorate in paleontology. She passed away in January 2016, just three months shy of her 101st birthday.

It is certainly fitting to have a female CO of a ship named after a female naval officer; I hope I do her and her family proud.

It is the second of the Harry DeWolf Class Arctic and Offshore Patrol Vessels (AOPV). This marks the first time the RCN has named a class of ships after people, specifically Canadian heroes. These ships are designed to operate in first-year ice up to one metre thick. The ship will be capable of carrying a helicopter as well as a variety of vehicles, cargo and payloads dependant on the mission. Dimensionally, she is twice the size of my last sea command (HMCS Nanaimo) and 1300 tonnes heavier than a frigate.

How often do you get back to NL?

I have been fortunate to spend most of my 21 years of service on the west coast in Victoria, B.C. I recently spent two years in Thunder Bay, Ontario and moved back to Victoria this past August (2016). I try to get home to Newfoundland once a year and when I do, it’s a mad rush to see as much of the old stomping grounds and to eat as much of the good Newfoundland food as possible.

How has studying the humanities/social sciences affected your world view?

Having focused my studies in the humanities/social sciences has, I believe, caused me to be a more open, analytical and compassionate leader. Rather than look at things from a strictly science/math/policy perspective, I try to see all sides of an issue and determine what makes the most logical sense to be beneficial for as many areas as possible that my decisions or recommendations influence. The experience of working towards the degree, and the subjects I studied, have led me to be disciplined and introspective. And my writing skills definitely come in handy - one of my former bosses told me many times how happy he was to have an English major review his work! Finally, my enjoyment of the arts, and theatre/performance in particular, give me an outlet from my work life. I have volunteered with amateur theatre groups in Victoria and Thunder Bay, and love being able to step out of my public persona and just be someone different for a little while.

Tough question – I’ve received lots of good advice from many people throughout my life, but there are three pieces in particular that stick out:

My own person motto has always been “Never ask your people to do anything you aren’t willing to do yourself.”

What are you most looking forward to in the next year?

I still have a busy job here in Coastal Division to occupy my time, but I am really looking forward to finally getting to see my ship in the flesh (in the steel?), to meeting the family of Dr. Brooke, and to starting all the ‘first-ofs’ – the keel-laying ceremony, launching and christening the ship, meeting my new crew and starting the arctic training that will prepare me for the missions to come.

As a Newfoundlander, what’s your family’s own connection to the sea?

My maternal grandfather (Captain Charles William Stewart) was a fishing dragger skipper. He passed away in 2002 and it was only after I took command of HMCS Nanaimo that my grandmother wrote me a letter at Christmas to talk about him and his work. He started on a dragger when he was just 16, with little education, but the first time he saw the captain in the wheelhouse he told himself that was going to be him one day. My grandmother told me that he used to say ‘Anyone who goes to sea has to have guts.’ For her to open up in a letter and compare me to him, to tell me that she was proud (and that she would always worry about me being at sea, like she did with him) was one of the best Christmas gifts I ever received.

Assuming as a former English major you are a reader – what are you reading right now?

Mostly I am reading military policy! Not that we don’t have some fun at work but the job can be intense and very serious, so lately I have been reading more humorous and light-hearted books. Recent reads include Furiously Happy by Jenny Lawson (a hilarious and eye-opening biographical account of the author’s own mental health struggles); and a re-read of Arthur Miller’s Death of a Salesman (which a dear friend in Thunder Bay recently directed). On my nightstand now, all partially read, are Scrappy Little Nobody by Anna Kendrick, Collision Low Crosser by Nicholas Dawidoff (about the NFL), Do Cool Sh*t by Miki Agrawal and a book on yoga anatomy. Chris Hadfield’s An Astronaut’s Guide to Life is on deck. How’s that for all over the map?