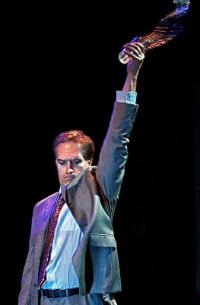 Aiden Flynn is an actor and arts administrator from St. John’s, NL.  A graduate of MUN, he was the co-founder of the Shakespeare By The Sea Festival in 1993 and was also a founder of a number of other theatre based ventures after leaving school. He has performed and worked as a director with numerous theatre companies across the province including Rising Tide, Resource Centre for the Arts, New Curtain Theatre, and C2C.  After eight years in Calgary Aiden founded the Rabbittown Theatre Company in 2004.  While at Rabbittown Theatre, Flynn also co-founded the New World Theatre Project in Cupids which saw the construction of a replica Jacobean-style playhouse.  Currently, he is the manager of programming and partnerships with the province’s Arts and Culture Centres division.  He and his wife Sarah have a beautiful little girl, Evelyn Belle, and a great  dog named Spike.

All of my friends were going to MUN after high school, I guess that was a big reason for going. That, and it was an affordable education and I could live at home in St. John’s. I’m a bit of a townie sook (that’s Joan Sullivan’s expression, I’ve always liked it). I suppose being from St. John’s and growing up 15 minutes away from campus made MUN the next logical step.

Can you give me the details on the degrees you’ve received (and when) from Memorial?

I started at MUN in 1989 and thought that I was going to be a political science major and history minor. Then I found out there was something called theatre specialization in the English program. I was a theatre nerd in high school and this prospect was immediately appealing. So I switched to the English program and kept on with the History studies as well. I left MUN in ’93 before graduating to be an actor and run theatre companies. This is not a course of action I would necessarily recommend to anyone. Ever. But it worked for me. If I remember correctly, I only needed three credits to graduate when I decided to leave. My parents were supportive of my decision, but in that headshaking ‘what are you up to’ kind of way. I eventually came back and got the three credits. When I got my diploma in the mail, I immediately gave it to my mother. She deserved it for all the grief.

What memories stand out from your time as a student at Memorial?

I loved going to MUN. I had great teachers like Valerie Burton, Dick Buehler, Noreen Golfman, and Tony Chadwick, who taught me how to think critically and creatively both inside and outside the classroom environment. I had an army of friends and colleagues that I couldn’t wait to see every day. I pretty much lived in the Reid Theatre and that was pure magic. I wasn’t a great student but I think my real education was developed through the MUN Drama Society. That’s where I started to learn how to be a producer and an actor. I worked with people that would become my closet friends and important collaborators.

You’ve been a professional actor and director for years – how did your arts degree prepare you for those dual occupations?

The English component of my degree certainly introduced me to great playwrights and the methods of great actors and teachers. It introduced me to important movements like the work of The Group Theatre. And of course, theatre specialization got me ‘on my feet’ in the theatre, not just as an actor and director, but as producer, carpenter, promoter, writer, stage manager, etc. My history studies were important because I developed the ability to contextualize my stage work. But I think the greatest gift my time at MUN and my arts degree gave me was the confidence that I would never be without work. If it wasn’t offered or available, I’d make something happen.

Can you explain your role with Rabbittown Theatre – sounds like you were a true old-fashioned theatre impresario there, wearing many hats.

Rabbittown Theatre was a business plan that was developed by the community as much as it was by me. There was an obvious need for a theatre space in our community where a company could rehearse and create in the actual performance space. We endeavoured to provide that at an affordable rate for local companies and one where we could afford to keep the lights on. It wasn’t easy. Along with trying to keep the building as accessible as we could to theatre and other arts disciplines, we were developing and staging our own work. My official role was general director, which really meant that I was overseeing the creation and the operational aspects of the company. We did some exciting work and saw some amazing projects grace that little theatre. One of the coolest things I will ever do was run that company in that space.

You’re now the manager of programming and partnerships for the NL Arts and Culture Centres. What does that job entail?

It’s a big job, but very rewarding. And again, lots of new things to learn. I am responsible for ACC provincial touring and presentation, and for the development of new strategies and projects. These projects are undertaken in the six ACCs across the province, but we also look to partner with venues and organizations outside of our own network. A particularly interesting aspect of the position is collaborating with arts organizations and individuals in the creation of partner projects. Since taking on the position, I’ve also joined the board of the Atlantic Presenters Association which is a great way to connect and share ideas and dilemmas with colleagues across the Maritimes.

I also take on a number of the management responsibilities for the St. John’s ACC, primarily around client relations and bookings, but also matters pertaining to maintenance and staffing.

You played Uncle Ted in the film adaptation of Kevin Major’s beloved book Hold Fast. What was that experience like?

Here’s a list of why that was an incredible experience (in no particular order of amazingness):

What stands out for you over your career thus far?

I think what stands out about my career so far is how much I’ve enjoyed it. Even when it has been terrifying and frustrating (and it has), it has always been intriguing and ultimately fulfilling.

If I had to pick one big moment that stands out for me, I’d have to say it would be winning the NLAC Patron of the Arts award with my Dad and Rabbittown partner, Neil Flynn. That’s an award I’m sure he never thought he’d get in his life.

Students should know that when they pay for their tuition, they’re not just buying admission to courses, they are buying an experience at a school. That experience includes the interaction and discourse you will have with students and professors, and it includes everything that a school has to offer outside the classroom. If you’re unsure about a course of study, take in everything that the school offers and that your time can afford. You’ll likely find out where your interests lie. I really didn’t know for sure what I wanted to study at MUN until I started to join groups and societies. They were fun and allowed me to focus on what was of most interest to me.

Maybe that I really don’t like public speaking. I’m always a little terrified if I’m asked to make a speech or ‘say a few words’ at an event. If I have to say something in front of a big group of people, I’d much rather pretend to be someone else.

What’s next on the horizon?

I’m three years in at the ACC which means it’s time to evaluate some of the things that have and have not been working. It’s an interesting time to work in the performing arts as an administrator. It would seem that people’s attention has been completely consumed by media that’s delivered by personal platforms like phones, tablets, home entertainment systems. But there is still a big hunger out there for live experience. If the event is right, you can see some big audience numbers. I think it also might speak to our basic human need to commune. As we remove opportunities to meet on a group level from our daily lives at an alarming rate, performing arts experiences become more valuable.

On the acting side, I’ve read some great scripts recently, and hopefully I’ll be back on stage this fall.