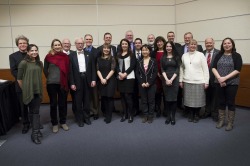 Two projects based in the Faculty of Humanities and Social Sciences were honored this week as they were named the winners of the 2016 President’s Award for Public Engagement Partnerships.

The award is Memorial’s highest recognition for public engagement excellence, and is the only President’s Award that recognizes a partnership between a Memorial person and a public partner.

The first winning partnership was for the Double Mer Point Archaeological Site Project located in the community of Rigolet. Jack Shiwak, AngajukKâk for Rigolet, and Dr. Lisa Rankin, professor in the Department of Archaeology are the project leads, and the winners of the award.

In 2013 the Inuit Community Government approached Memorial with an idea that could benefit both the local population and the university: a chance for the people of Rigolet and Memorial faculty and students to develop an economically and culturally significant site together.

The work of the partnership focuses on the excavation and reconstruction of a late 18th- to early 19th-century Inuit winter community, known as Double Mer Point. The site is located at the end of a nine-kilometre boardwalk hike and will become a key component of the community’s tourism strategy.

The project has provided hands-on experience for seven community members, including skills training as field crew and lab assistants. Eighteen university students have had the opportunity to gain real-life experience. The initiative has also played an important role in helping tomorrow’s archaeologists understand and value the role of meaningful public engagement in their research and field work.

The partnership has provided a wealth of information and engagement to all of the partners, deepening Rigolet’s sense of pride in its long and rich Inuit cultural heritage.

The other 2016 winning partnership also included a focus on youth in Newfoundland and Labrador. Rose Ricciardelli, associate professor, Department of Sociology, and Peter Clark, Commanding Officer, Newfoundland and Labrador RCMP, were honored for their team’s work helping to give young people who come in contact with the law a chance to "make it right" without entering the formal judicial system.

Over the past two years, the partners collaborated with several communities to initiate a pilot project geared towards implementing extrajudicial measures, designed to encourage relationships between youth and their communities, as well as individual officers and the communities they serve.

The partnership has ensured that decision-making processes are based on research that is connected to communities. Each partner brings different, yet complementary, skills and resources to the project, all with the goal of working collaboratively to ensure youth have every opportunity possible for mentorship and to succeed.

This fall, the initiative began expanding its pilot. The goal is to have extrajudicial measures in place province-wide in order to support a community-based approach to reduce youth involvement in the criminal justice system.

The President’s Award for Public Engagement Partnerships includes a $5000 cash prize, along with a video produced by the Office of Public Engagement and the Centre for Innovation in Teaching and Learning. For more information about the award please see www.mun.ca/publicengagement/.