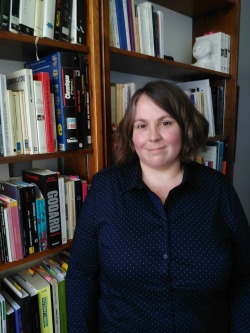 Each month we will be profiling a new member of the Faculty of Humanities and Social Sciences.  This month our subject is Dr. Karine Abadie from the Department of Modern Languages, Literatures and Cultures.

What is your name?

Where are you from?

From everywhere! I am born in Montreal, my father comes from Lebanon, I grew up in different African countries, I lived for several years in France, and I am both Canadian and French.

What is your educational background?

(i.e. what degrees do you hold and from where)

I have a PhD. in French literature and Cinema, which I got at Université de Montréal, in Quebec province.

Do you have any other relevant education or work background?

Between my M.A. and my PhD., I worked several years in France as a language assistant and as a French teacher.

What position/rank do you currently hold?  With which department?

I am an assistant professor in the new Department of Modern Languages, Literatures and Cultures.

What is/are your research area(s)?

I am a specialist of the interwar French literature and of the critical discourse about cinema in the 20s and the 30s. I am mainly interested by what French writers had to say about cinema: will cinema have a future? Does it need to be in colour? What do we call the man who directs a film? Is cinema an art? Those kind of questions… I am currently working on the critical edition of a virtual anthology of texts, that brings together a selection of texts, produced between 1925 and 1929, by French writers who wrote about cinema during the rise of the talkies. I am also collaborating with the Technès project (http://technes.org/en/), which is an international research partnership (mainly Canada, France and Switzerland) in cinema studies, working on the creation of a bilingual (English and French) Encyclopaedia of Cinema Technology.

Do you have any recent publications or presentations?

My last conference was on a French writer, André Gide. I wanted to demonstrate that even though he did not write a lot of things on cinema, he was a real film lover, a cinéphile, and that he put in his letters and in his literary diary, a lot of information on his habits and on films he loved. That paper should be published soon, along with an other one on André Gide and Marc Allégret, a French filmmaker and a very close and special friend of Gide. By the end of September, I will attend a conference in Portugal to present a paper on the relation between cinema and drama in the 20s, in France, in order to demonstrate the struggle those two arts were in during the 20s, before the talking era.

What courses are you/will you be teaching?

During the fall semester, I will be teaching a French cinema course, a French grammar and textual analysis course and a graduate course about the Quebec novel from the 60s and the 80s. In winter, I will teach the grammar course again and I will create a new course about imaginary and cultural productions, in which my students and I will analyze the representation of both First and Second World Wars in French literature, cinema, comics, songs and publicity.

What new research areas/courses are you developing?

My research area – discourse about cinema – is a new field in film studies and cinema history.

For the moment, I am focusing on what French writers have to say, but in the future, I would like to see what German, Italian, Spanish, English writers between the two world wars were writing about cinema, in order to cross those thoughts and to see the similarities and the differences between the reflections.

I don’t have a website, but you can find me on my research blog, http://cineologie.com/, which is in French, on twitter (@KarineAbadie) and on facebook (Karine Abadie).

Why did you choose to come to Memorial?

What are your early thoughts on St John’s/Newfoundland and Labrador?

I can’t say much about Newfoundland and Labrador… As for St. John’s, I like the size of the city, I like the people I meet, and I love the proximity of the ocean, the thought that every day, I am able to watch the sun rise and to see the ships in the harbor.

Do you have any hobbies/special interests?

Beside cooking, my hobbies are both to read and to watch movies. Then, you can imagine how I enjoy my work! But living here, I think hiking is going to be my new thing!