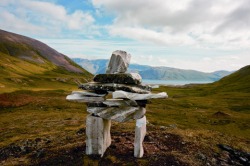 Mamu Tshishkutmashutau / Innu Education (MTIE), the Labrador Innu school board, was recently honoured as the first recipient of the Faculty of Arts Newfoundland and Labrador Community Research Engagement Award.

The award was established in 2013 to recognize a community or place within the province of Newfoundland and Labrador which has been an instrumental partner in research completed by an Arts faculty member(s) and/or graduate student. The research must have taken place within the last five years and have made a positive difference in the community.

Nominated by Dr. Marguerite MacKenzie who has partnered with the organization for more than seven years on two major SSHRC-funded research grants, MTIE was cited for their support through contributions of time, personnel and substantial funding.

“The years of work that have resulted in a major trilingual dictionary and many additional language resources for the Innu language would not have been possible without the close collaboration and support of the directors of the school board, which is making positive difference to the education of Innu youth,” said Dr. MacKenzie, who recently received the prestigious SSHRC Insight Award.

According to Dr. MacKenzie’s initial nomination letter, over $500,000 has been provided by MTIE for researchers to travel to Labrador, pay elders, hold workshops with Innu staff, as well as to support graduate student work to archive and digitize papers and tapes related to the Innu language, and prepare Innu language reading materials.

“The partnership Dr. MacKenzie described in her nomination truly fit the criteria for the award - Mamu Tshishkutmashutau/Innu Education enabled her research and her research in turn benefitted the community. Our committee strongly believed that Marguerite’s research simply could not have been accomplished without the cooperation of the MTIE – which is one of the key questions we wished to answer,” said Dr. Lynne Phillips, dean of the Faculty of Arts and chair of the Community Research Engagement Award Committee.

Dr. MacKenzie presented the award to Bart Jack, co-chair of the Mamu Tshishkutmashutau/Innu Education (MTIE), on November 27, 2013, at a ceremony in Happy Valley-Goose Bay officially recognizing the publication of the online and printed Innu dictionary.

“Innu education will be central to the re-emergence of more fulsome Innu institutions and for the future of a rich Innu culture. Mamu Tshishkutamashutau is honoured to be the first recipient of the Newfoundland and Labrador Community Research Engagement Award. This recognizes the dedication of many Innu and non-Innu people who have collaborated for years to produce high quality educational, language and cultural tools that are both a tribute to the Innu past and will be a beacon of hope for the Innu future, said Mr. Jack.

Nominations for the 2014 Newfoundland and Labrador Community Research Engagement Award (link to website) can be forwarded to arts@mun.ca.  The deadline is March 31, 2014.