Lost (and found) in translation 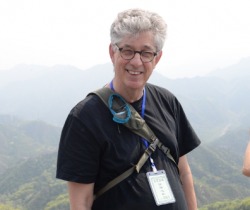 Lost (and found) in translation

Not surprisingly, it’s difficult to find an accurate translation of the word “mummers” in Chinese.

That slight hiccup in understanding occurred during Dr. Gerald Pocius’s recent trip to Guizhou province, in the southwest of China. Thankfully, Xaun Wang, a Memorial graduate student who attended the lecture, helped translate: “I told them it was a Christmas ritual.”

Dr. Pocius, of Memorial's Department of Folklore, Faculty of Arts, and an expert in intangible culture, was invited to lecture at Guizhou Minzu University (GMU). The institution is renowned for ethnology and sociology in an area well known for a variety of ethnic groups.

“At the end of the talk on mummers, I showed a picture of mummers’ ornaments in the Avalon Mall — on the box it says ‘Made in China,’” laughed Dr. Pocius.

As a tall Caucasian visiting a region of China that rarely sees Western tourists, Dr. Pocius experienced what it was like to be considered exotic during his 16-day visit.

“There were no white guys in sight — people were constantly jumping into photos with me,” said Dr. Pocius, who describes his first trip to China as “two and a half weeks of chopsticks and great food.”

He also led a parade practice, purchased a Chairman Mao suit and bartered with locals between his lecturing duties.

Years ago, Dr. Pocius’s mentor, Dr. Henry Glassie, described China to him as a place where people led modern and medieval lives. That characterization rang true, Dr. Pocius says, as he explored street markets, traditional villages and 13th-century buildings held up by wattle and daub.

“The villages were straight out of the medieval world with wonderful textured stone roofs. Its wooden architecture, like the Tudors in England, but from the Ming dynasty,” said Dr. Pocius, who is considering future research in the region.

Dr. Pocius’s lifelong enthusiasm for Chairman Mao took many of the Chinese by surprise.

“Younger people couldn’t believe I was interested in him,” said the self-described lover of propaganda, who tried to view Mao’s body in the Tiananmen Square mausoleum; unfortunately, it was closed the day he visited. “He transformed China.”

The lecture tour — Dr. Pocius also spoke at Kaili University in Guizhou province — was just the latest in a series of connections between Memorial and China.

“There is a tremendous interest in the West. And of course Memorial is very well known for its folklore program ― there’s not a lot of places you can study this stuff,” said Dr. Pocius.

Ms. Wang is one student in a series of folklore graduate students to attend Memorial from China. There are currently three students enrolled in the PhD program with another set to arrive in St. John’s this fall.