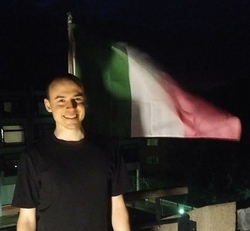 Sean Fleming is a Junior Research Fellow in political theory at Christ’s College, Cambridge. He graduated from Memorial with a Bachelor of Arts (Honours) in political science (2012). After completing an MA in political science at the University of Calgary (2014), he was awarded the Rothermere Fellowship to do a PhD in politics and international studies at Cambridge (2018). He is from St. John’s.

Memorial was the default: it was ten minutes away from home and offered what I wanted. It didn’t occur to me to apply elsewhere. We’re lucky to have such a great university in our backyard.

What drew you to do an undergraduate degree in political science?

I wanted to go to law school, and I heard that political science was good preparation for law. The choice was no more sophisticated than that. After taking Intro to Political Science (POSC 1000) with Russell Williams, I knew I had made a good choice. I had initially planned to minor in law and society, but I switched to philosophy after taking Peter Trnka’s Intro to Philosophy (PHIL 1200) course in my second term. In the end, I was more interested in politics and philosophy than in law, so I decided to pursue political philosophy instead.

Some of my best memories are of the time I spent working for Alex Marland. I took his Political Executive in Canada course (POSC Science 3810) in Fall 2010. At the end of the term, he asked me if I wanted to work for him over the holidays. He saw some potential in my 20-year-old self and did whatever he could to cultivate it. I’ll forever be grateful for that. Marland didn’t just teach me how to write well and do good research; he also taught me the importance of integrity and mentorship.

I fondly remember my honours thesis supervisions with Luke Ashworth. He took a genuine interest in my work and treated me more like a grad student. At the time, I was immersed in contemporary political theory. Ashworth taught me the importance of history for political theory, and that lesson ultimately led me to Cambridge.

It’s difficult to pick just one, but I’ll pick Analytic Philosophy (PHIL 3910) with Steve Gardner. That course influenced my academic work more than any other. It got me interested in the philosophy of language, and it taught me the importance of clarity and brevity. On the first day, Steve presented us with a bargain: the readings are very short, but you have to read every word carefully and keep your essays strictly within the word limit. There was a one-percent penalty for every additional 100 words. I’m tempted to use Steve’s rule with my own students!

The two formal logic courses (PHIL 2210 and 3110) I took with Steve deserve honourable mentions. I took these courses to prepare for the LSAT, but I liked them so much that I began to seriously consider academia.

Being a junior research fellow at Cambridge sounds like a dream job for an academic. What’s a typical day like for you?

A typical day varies according to the time of year, so I’ll describe a typical day during the term.

I try to get out of the house early and get some exercise. Cambridge is very bike-friendly, so I’ll usually cycle to one of the libraries. Mornings are usually reserved for writing.

My teaching is usually in the afternoon. In addition to lectures, Cambridge has a system of small-group undergraduate teaching called ‘supervisions’. Students get to choose three topics per term that they want to explore in greater depth. The supervisor assigns a question and a reading list, and the students write essays. Then the supervisor will spend an hour with the students, usually two at a time, discussing the topic. The point is to give students face-time with academics.

Most of the seminars and talks are in the afternoon. There are so many that one couldn’t possibly go to a small fraction of them. Lots of interesting speakers pass through Cambridge. No matter how busy I am, I try to go to a few talks every week.

I usually write some more in the evening. Sometimes I’ll go to dinner, either at my own college or a friend’s college. Everyone wears formal attire and a ‘gown’, which looks like a black cape. But usually I’ll just cook something for myself.

In my case, the subject-matter was directly relevant to my career, so I’ll say a bit about how my degree prepared me for life. It gave me a sense of purpose and taught me self-discipline. I did well in high school, but I wasn’t very studious or motivated. I put in the bare minimum of effort and jumped through the hoops. High school taught me the art of winging it. But at Memorial, I was genuinely interested in what I was studying, and to do well I had to be disciplined. My mindset was different from the very first term. I stopped thinking of assignments as obstacles, and I started taking pride in my work.

What in your opinion is something the province of NL can do right now to improve the situation for people under 30?

Protect the environment. The most valuable ‘resource’ that Newfoundland and Labrador has is not oil, ore, or hydro; it’s the vast, untarnished wilderness. We are so used to being surrounded by wilderness that we take it for granted. If Torbay Point or Freshwater Bay were in the UK, national parks would have been set up to protect them. Passing legislation to protect the East Coast Trail would be a start.

I assume that “the situation” refers to Newfoundland and Labrador’s economic situation. The hard truth is that there is no simple solution. We’ve long been searching for some magical industry or megaproject that will solve all of our problems. The experience of the past 70 years should have taught us that this is a fool’s errand. Resource industries, in particular, are far too cyclical.

A better strategy is to build an economy from the bottom up. Small businesses and local production should be encouraged wherever possible. Above all, we have to relearn how to produce things for ourselves, starting with our own food. ‘The economy’ doesn’t have to be something that is created and managed from above by governments and corporations. Economic activity can start in our own backyards and sheds. Cutting firewood or growing vegetables won’t make us rich, but it will help to make us a living. A healthy economy looks more like a giant farmers’ market and less like a one-industry town.

Some of the most insightful people in Newfoundland and Labrador today are Steve and Lisa McBride, the homesteaders on the Southern Shore. Let’s start listening to them instead of the false prophets of ‘development’, who have got us into our current predicament in the first place.

I hadn’t set foot off the island until I was nearly 21. When I did leave for the first time, it was only to go to Ottawa for a week. I hadn’t been on an international flight until I went to live in the UK. I guess this is not so unusual for Newfoundlanders and Labradorians, but it’s pretty unusual among the people at Cambridge.

There’s a lesson here: it doesn’t matter if you’re not as worldly or ‘polished’ as people from Toronto, Vancouver, New York, or London. Hard work counts for more than knowing which fork to use, and Newfoundland has plenty of virtues of its own.

Don’t let the common chatter about the job market dictate what you study. In our technological age, predicting the job market is at least as difficult as predicting the stock market. Who would have thought that nursing and plumbing would be more difficult to automate than radiology? Be skeptical whenever you hear prophesies about which degrees or skills will be in demand in ten years.

The hardest part of studying anything is maintaining motivation. If your motivation for studying a subject is purely extrinsic (to get a degree that you think will make you money), then you’ll probably be miserable. Choose a subject that you could see yourself studying in your spare time. Economic considerations have a role to play—you have to make a living somehow—but motivation is equally important.

My favourite place on this planet is the west coast of Newfoundland, especially the Humber Valley and the Bay of Islands. The west coast really is the best coast, as they say out there. I’m a bit biased, though. Two of my grandparents are from out there, and I spent many summers there growing up. I still have lots of family on the west coast, so I never feel like a visitor.

Iceland is my favourite country to visit. I’ve been there twice to visit an Icelandic friend who grew up partly in St. John’s. The landscape is amazing, but so is the history of the country. There are lots of comparisons to be made between Iceland and Newfoundland. The two islands are about the same size, but Newfoundland has about 140,000 more people, plus Labrador. Iceland severed its ties to Denmark and became a republic in 1944, whereas Newfoundland joined Canada in 1949. The settlers in Newfoundland, like the settlers in Iceland, came to fish. But Iceland did a much better job of protecting its cod stocks—by force when necessary. Every Newfoundlander and Labradorian should read about Iceland’s Cod Wars against the British. Iceland produces hardly any oil and does not have a federal government to rely on, but Icelanders are still better off than we are. That should give us pause.

I’ve been reading a lot about technology. The best book I’ve read recently is The Technological Society by French philosopher Jacques Ellul. The main argument is that our era is fundamentally ‘technical’: efficiency and rationality have become our highest ideals, and they increasingly take priority over community, morality, and individuality.

Ellul makes two arguments that are even more relevant now than when the book was first published in 1954. The first is that human control over technology is an illusion. Technological development is more a product of evolutionary processes and unintended consequences than of rational design. The second argument is that human beings are maladapted to life in a technological society made up of concrete, steel, and large organizations. Instead of modifying the society to fit the human being, we modify the human being (with propaganda and drugs) to fit the society. Not surprisingly, Aldous Huxley was instrumental in getting Ellul’s book translated into English.

My favourite genres of music are folk (both Newfoundland and Irish) and punk rock (the faster the better). I listen to folk when I’m trying to relax and punk while I’m working. On the folk side, my current favourites are the Masterless Men, Ryan’s Fancy, and the Clancy Brothers. On the punk side, I’ve been listening to Strung Out, Hit the Switch, Lowbrow, and Dutch Nuggets.

I also listen to a few podcasts. I’d recommend Talking Politics, which is hosted by David Runciman at Cambridge.

My first book will be published by Princeton University Press next year. I’m pretty excited about that!