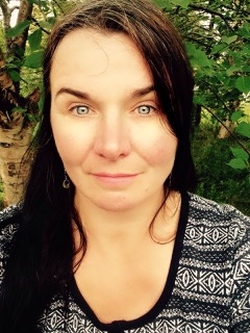 Roseanne Barry was born in Grand Falls Windsor. She has lived in Toronto, Alberta and India and is an enthusiastic traveler and single parent. She graduated from Memorial in 1996 with a degree in anthropology. In 2018 she launched Meals for Margo, a meal subscription service designed for people living with cancer.

The decision was based on acceptance. As a mature student, (I never received my high school diploma), I’d applied to places where I did not know anyone so that my focus would be on my studies, and not socializing. I felt that it would help with my self-discipline. I’d spent the previous year travelling across Canada and also working and living with a family in a village in India.

Arriving back to Newfoundland, I wanted more adventure, loved reading and learning and thought I could combine that with academics, so university was a logical next step. At the end of my first year university I was named outstanding student of the year for my involvement in extracurricular activities and academia, and was also on the Dean’s list. (So I guess I made the right decision!)

Do any particular memories stand out from your time here as student?

My first year was spent in Corner Brook campus, and I have several fond memories. Some of them include the 90 year old woman I’d rented a room from … She would go around wearing polyester dresses and Nike sneakers and burn her toast every morning, setting off the smoke detector alarm and whenever we spoke, she always had something to say about the Germans coming to her door during the war.

At Sir Wilfred, I fondly remember Dennis Bartels, professor of anthropology, and Dave Broad, professor of sociology. Bartels was the reason I decide to pursue Anthropology and at the time it was possible to do an interdisciplinary degree os anth/soci, so it suited me perfectly.

When registering for courses, I’d only looked at the university calendar and I was so excited about the amazing offerings they had. Little did I know i couldn’t sign up for third year art history and native studies because I didn’t know anything about prerequisites.

Dennis Bartels straightened me out on it all, and the second term I was able to take some third level courses.

Dave Broad was intense and very tough…I loved it! He opened a lot of eyes to global issues, and gave a lot of failing grades. I liked his high expectations and accepted the challenge. At the time we were studying about central American politics and I was serving as president of the anthropology society and also doing some fundraising. Myself and a few others approached Broad with the idea of accompanying us on a study tour. About six months later we were off to Nicaragua for ten days … Our tour guide was a revolutionary with the Sandinistas. it was the education of a lifetime.

I also have many memories of the St. John’s campus – the fondest would be of attending Elliot Leyton’s classes and the many one on one conversations we had. There were the afternoons at the Breezeway, where a group of us from anthropology, philosophy and Mike Cook from theatre arts and several others would engage in the best debates, and debacles.

What drew you to study sociology/anthropology?

How could a person not be drawn to anthropology? It is about people and the past and present - it’s about life. Why we do what we do, live where we live, why we look like we do, eat the foods we eat, buy the crap people sell, the languages spoken. Anthropology is the next best thing to being alive in places and with people that we could otherwise only imagine.

Dennis Bartels: “It’s not that you don’t know; it’s that you haven’t been taught.”

Can you explain the inspiration behind Meals for Margo?

I’ve been looking for my niche for several years, and it has brought me to many places. From an organic farm in BC, to traveling in Europe with plans to develop a travel app, and then six months studying law, to finally getting to where I needed to be.

While taking a culinary course on commercial cooking, I was speaking with my friend Margo Hughes, about what I wanted to do when I finished school. At the time she had received her third diagnosis of cancer, but she always had a smile and a witty retort, and was very interesting. She was a very bright, entertaining and incredibly encouraging woman who was known for her feistiness, to say the least. During one of our telephone conversations I’d mentioned that years ago I would prepare organic soups and juices and other foods for my sister Mary when she was receiving cancer treatments. Margo knew I had a passion for cooking and an intense interest in health and nutrition. When I suggested starting a food business specifically for people living with cancer, she was ecstatic about the idea. Sadly, she passed away not long after that, about a month after I’d graduated.

The business idea started there and is still growing. I felt that Margo gave me the spark of encouragement and enthusiasm I needed so decided to dedicate the business to her and others like her who are struggling with eating while living with cancer.

Can you explain how Meals for Margo will work?

Meals For Margo is a meal subscription service. It will consist of 10-12 meals per week, breakfast, lunch and dinners with optional snacks. The foods take into account the side effects of chemotherapy like difficulty swallowing, the need for bland food, and high protein to name a few. The ingredients are primarily organic, and when possible local, and available for pick up or delivery through skip the dishes (for now). The website will offer an option for friends and loved ones to contribute towards the costs of meal packages in order to make them accessible to more people. There will also be an option for individuals or corporations to contribute to a fund that people in need can avail from when they are sick and need nourishment but are not able to afford it at the time.

In a perfect world, what initiative (building, service, cultural offering, etc.) would you add to Newfoundland and Labrador (or St. John’s) to make it a better place?

Definitely affordable housing. There is so much new construction happening in St. John’s and surrounding areas, and so many other places being used up with Airbnbs. People who are disabled, pensioners, the mentally ill, immigrant families, and all of those who are trying to live off minimum wage, or a single wage, are not able to afford a decent place to live. Sixty year olds have to get roommates, and single parents take in boarders just to make rent. Something really needs to change with that. Perhaps a limited amount of new builds could have a mandatory allocation of affordable units included in downtown areas as well as suburban.

What’s a typical day like for you at work?

My days now are a mix of researching, teaching myself accounting, financials, filling out applications etc.

I don’t really have a typical day yet, but I am looking forward to having many days of cooking bliss!

Anthropology jived with the worldview I held before discovering it. My years of studying cultural anthropology certainly broadened my perspective, taught me effective research methods, and led me to a better understanding of what I DON’T know.

Insofar as recommending the pursuit of an arts/humanities degree, I’d say - so long as you don’t have dreams of being rich! It might not be the most lucrative of career choices, but I do believe the world would be a much better place if at least one portion of a degree, major or minor, was in the humanities. And, I strongly believe that medical schools should have at least a few core credits in cultural anthropology and philosophy.

I would say follow what perks your curiosity, makes you want to seek further, get answers, make conclusions, and above all that opens you up to a life of learning.

Spain, and perhaps most Spanish cultures. I love the melody of the language, the music, food, dance, and above all the people. A unique blend of fun and sophistication. On a more local level…I love to visit my friend Ani’s cabin! It’s a little over an hour’s drive, full of art and musical instruments and a wood stove.

The Power of Habit by Charles Duhigg

It’s about why we do what we do, and provides the science behind the actions and also includes some very interesting examples with products we use daily, without realizing why.

Very much looking forward to building my business and becoming more involved in the community.