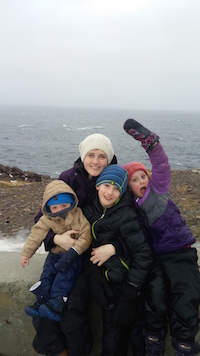 Laura Vokey is the creator of Wild Island Forest Academy in St. John’s, NL. Working diligently since Winter 2017, Laura is very close to making an outdoor-based primary/elementary school a reality here in Newfoundland! Wild Island Forest Academy currently holds approval in principal from the Department of Education and is waiting on a City of St. John’s permit to apply for final approval. Currently Wild Forest is offering preschool and afterschool programming in St. John's and in Portugal Cove. A graduate student at the Faculty of Medicine at Memorial and mother of three children and two furbabies, Laura is kept quite busy! www.facebook.com/wildislandnl www.instagram.com/wildislandnl

I first attended Memorial right out of high school in 2003 where I completed a BA in interdisciplinary studies in Sociology/Anthropology. While living in Norway in 2015 I took a graduate course in medicine titled Issues in Northern, Rural, and Remote Health. Having an academic background in the Social Sciences allowed me to achieve a high grade and go on to be accepted into the Faculty of Medicine as an MSc student in Community Health.

What drew you to do a degree in sociology/anthropology?

I had actually entered the Bachelor of Nursing program and was doing Sociology and Anthropology courses on the side as “fun” courses! I initially took introductory SOCI/ANTH courses as electives but got hooked on taking such courses, as I was, and am, just immensely fascinated by people, societies, and cultures.

I actually do remember particular professors, courses, and books that impacted me and definitely contributed to my open minded perspective on the world and on people. Nisa, House of Lim, War, Hunting Humans, and countless other books, articles and discussions. I also really enjoyed Classical Sociological Theory, which gave me a great base for doing Critical Theory at the graduate level!

One memory in particular is when I was doing a course on Religion (can’t remember the specific name) there was a lot of old material written in old language which I had a difficult time wrapping my head around – so I would bring it to my grandmother to read and she would explain things to me! She often read my course materials out of interest, and likely would have been an academic if she were born in a different time.

There is another book that influenced me but cannot remember its name! It was an anthropological study in rural India and in that book it discussed the concept how we are all connected to others by an invisible tie, and those closest to us have stronger ties. When someone passes away that tie is cut and that is why we feel pain and grief. I took this course 10+ years ago but concepts such as these have stayed with me!

How did you go from graduating with a BA to becoming an entrepreneur and launching Wild Island Forest Academy?

Wild Island Forest Academy materialized from my determination to create an outdoor-based primary/elementary school in Newfoundland. My son, who was in grade 2 last year, went to play outdoors at school maybe a handful of times all winter. There are outdoor-based schools in all other provinces except Newfoundland, and the benefits of nature for children and adults alike are far reaching. Having read, out of interest, many books on education and the current school system I knew that if I couldn’t find what I thought was an optimal education for my children and other children I would create it! Wild Island Forest Academy was incorporated as a registered non-profit in February 2017. Since then I have been working diligently to make it a reality.

What was your biggest challenge in getting your business up and running?

Definitely selling the idea! When I first approached the Department of Education I’m likely not exaggerating when I say that they thought I was out of my mind! However, in writing a thorough proposal, providing numerous resources, and the support of local, like-minded families have demonstrated to the Department that an outdoor-based school is a worthwhile and necessary cause.

Can you explain the inspiration behind Wild Forest Academy?

Today’s children and families often have limited opportunities to connect with the natural environment. Richard Louv called this phenomenon, ‘nature-deficit disorder’ in his book, The Last Child in the Woods. Louv opened the nation’s eyes to the developmental effects that nature has on our children and documented how modern family life has changed dramatically in the last two decades. Children spend more time viewing television and playing video games on computers than they do being physically active outside.

In the past decade, the benefits of connecting to nature have been well documented in numerous scientific research studies and publications. Collectively, this body of research shows that children’s social, psychological, academic and physical health is positively impacted when they have daily contact with nature.

Schools with naturalized outdoor environments allow children to have safe, ready-made access to green places and engagement with nature. A diverse array of plant life encourages children to experience nature in more ways and more frequently.

In an outdoor setting, children are more relaxed and open to experiences that present themselves. They also have more opportunities to act on their natural instinct to move - in a productive and
meaningful way.

By being immersed in nature on a regular, long-term basis throughout the unique four seasons of the Newfoundland school year, children will develop a deep emotional connection to nature that will help them understand they are a key stakeholder in the complex workings of our natural world. With this mindset, it is our hope that our students will grow to be the leaders of tomorrow with a strong ecological consciousness and become valued caretakers for our planet.

We encourage students to think of themselves as multifaceted individuals in relation to each other, the school community, and the world, and to think about these commitments. Within this holistic approach, students are imagined as thoughtful, active, participatory learners capable of forming strong and positive human relationships. Examples of this include: learning about and being supportive of each other's strengths, intelligences and struggles, learning to be allies to one
another as we partner up with different age groups in, engaging in action projects in the community, studying the systems (environmental, economic, cultural) we live in, and thinking of alternatives to support a more sustainable future. We will nurture students to think of their
responsibility to each other, and to the planet beyond the classroom.

It really varies! Sometimes filling in for our preschool program if a staff member is sick, filling out forms and paperwork for our various city applications, applying for non-profit funding, mopping floors and cleaning toilets at the school, answering emails and Facebook messages from parents, working on programming, spending time with my own 3 kids, on and on it goes! I am so, so determined to open the doors of Wild Island Forest Academy. We are waiting on the appropriate city permit so that we can apply for final approval from the Department of Education.

How did your arts/HSS degree prepare you for life as an entrepreneur?

I think having a solid foundation in the understanding of people, and a high curiosity in how others do things have set me on this path. The whole idea of “if you measure the intelligence of a fish on his ability to climb a tree, he will spend its whole life believing he’s stupid” applies here, where there is an innate skepticism of current protocol and the engrained ideas and beliefs that we have as a society in Newfoundland, in Canada, and the Western world. Studying the Social Sciences encouraged my inherent curiosity and wonder of how other people, cultures, and societies do things and why, and in learning these things what we might be able to improve for ourselves.

What in your opinion is something the province of NL can do right now to improve the situation for young entrepreneurs?

Definitely support! Especially on a governmental level. The roadblocks and challenges I’ve encountered have largely been related to permits, approvals, and funding.

Reflecting on the success of Newfoundland’s first outdoor-based school, and how it has influenced and broadened the perspectives of educators and parents that all children can be happy and thrive at school!

The value isn’t in the letters after your name but the knowledge and perspective that you gain! Having a solid foundation in the arts and especially Social Sciences (in my biased opinion!) allows for a deeper and broader understanding of the world and enriches your perspective.

I was raised in Nain, Labrador, where I was often the only white person in my peer group. My parents moved there in the 80s and stayed for over 20 years! This would of course be where a love of the outdoors was instilled in me and time in nature being a grounding, necessary part of my life.

Just LEARN! Challenge yourself, push yourself to explore topics that are new to you, be curious and fascinated, it’s a big world! What’s your favourite place to visit? Europe! The history, architecture, food, culture; so many in such a small area. I have been many times and fully intend on many more, especially with my kids whom I hope will be no strangers to the immensely diverse places, people, languages, and food of the world!

Unfortunately I don’t do a whole lot of reading with the business, school, and a family, which is tragic given I was once a very avid reader! However a couple of books that I would recommend are The Curiosity of School by Zander Sherman, and Last Child in the Woods by Richard Louv.

Wild Island Forest Academy finally opening and having a community of families and children that are thriving!