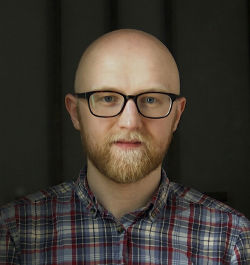 Andrew DeRoche is a graduate of Memorial University, holding both a degree in Anthropology, and a degree in Computer Science. He currently works at IBM and lives in Ottawa. He began studying at Memorial in 2006, and finished his arts degree in 2010. He then finished his second degree in computer science in 2015, and is continually finding new ways to combine the two fields.

When it came time to figure out where I wanted to go for university, I had no idea what I wanted to do or learn. As it turns out, this is perfectly normal, but no one told me. So I figured I should go somewhere with as many good programs as possible, rather than decide what to do immediately. Having the freedom to feel like you aren't locked to one particular program is a great way to explore what you might want to do without giving up any other options. After doing what most students do and reading about where to go, the theme around Memorial stayed the same; choice. MUN was consistently praised for it's wide swath of programs in arts, sciences and professions. Since I didn't know what to do, having all the options was an attractive quality.

What drew you to do a degree in anthropology?

During my first two terms, I took full advantage of the reason I came to Memorial in the first place. I took a whole variety of courses from as many disciplines as I could touch, but the one introduction course that I kept thinking about even after class was my anthropology course. It was, to me, a totally new way of framing human cultures and behaviours, and had always been such a self-reflective practice, I couldn't help but be continually drawn in. Each course seemed to reveal some new truth about people and the things we take for granted. Starting in my second year of study, I took as many anthropology courses as I could fit.

Although my first degree was in the arts, I became a student assistant at the Math Learning Center in my third year of study. While I learned more about the structures of civilization that help define us everyday using the analytical tools that were new to me, I helped other students learn and develop their own skills in mathematics. It was, yet again, a wholely unique experience for me that I had never been exposed to prior to my time at Memorial. They used such a different approach to teaching than the rest of the campus, and mentioned that my experience in the arts was part of what they were interested in. Working with their team was one of my fondest memories of my time at MUN. Especially since one of their team members would eventually be kind enough to become my wife.

The best piece of advice I received was actually the same piece of advice from a few different people, all of them acting as one of my professors at one point or another, and that was "write it down by hand". Every class I had taken during my long time at Memorial University was a chance to learn something I didn't previously know, but the details I always remember are the ones that I wrote down on paper, rather than typed, or listened to, or simply read. It turns out this advice is good for after school as well. It's such a simple tool, and yet it helps a person remember more. And that translates to learning more, knowing more, and eventually, doing more later in life. That has been my experience from such a simply piece of advice. When your professor says " write it down", trust that they are helping you.

Can you comment on how your background in social sciences gives you an edge in the technology sector?

Despite my work developing and engineering software with one of the world's largest and well respected companies, what seemed to catch their eye was my background in the arts. Technology is more than knowing the rules, it's also knowing why people use it, how they use it, and what significance it has in their lives. Having the skills that my degree in the arts demanded, was equally important, if not more so, to the position I have now. Having that kind of insight and approach to figuring out the motivation behind the 'why' is incredibly valuable, and one that is developed and honed in the arts.

Do you think everyone should learn to code?

I think everyone needs to learn how code works. Being literate in the details of how the devices around us work is an empowering thing. When aspect of our culture become larger and larger, taking up more and more time and space in our thoughts, they become a central part of the culture that we share with each other. Much like any sport or song or story that we all, collectively become familiar with, we should all know more about code and the digital creatures that have found a happy home in our lives. Memorial University has an excellent computer science program (I would know!).

And with newer initiatives like CodeNL, which arrives to introduce computer programming to schools across Newfoundland, we can all be better equipped to know a skill that is becoming so crucial to economic life, but also arm ourselves with working knowledge that helps us be comfortable with our digital lives.

What ways has an arts degree affected your world view? What would you say to those who question the value of arts degrees?

My time as an anthropology student has greatly expanded a sense of global empathy for me. Seeing and learning how people negotiate their way through life given any number of radically different challenges is a redefining experience. Those who question the value of studying the arts often do so from the perspective of economic reasons. It's understandable considering the state of our collective anxiety over the state of things. But while a person's working life can take up eight hours a day, five days a week (or more!), everything else in life can arguably belong to the space of person, social and cultural spheres. Areas that are the study of the social sciences and humanities. Everyone is affected by it, and everyone affects it, in some way. Just as being literate in code is useful, being literate in culture is an invaluable thing. The study of the arts is the study of human motivation. It is what motivates us, that defines us individually and together.

I have a healthy interest in heavy metal music. This is a fact that will earn me more enemies than friends. Which, when you think about it, is pretty metal.

If you're unsure about what to study, that's OK. Almost all of the students around are exactly the same. You may have a couple of friends that know everything about their future already, and that's OK too. It's important to trust yourself when it comes to your interests. If there is one class that you continually think about after you leave, even if it's because you enjoy the particular person teaching it, you should put that at the top of your list. If you follow the thing that obsesses your mind, you will always find the motivation to do it. And that is almost always followed by success. What you are obsessed with may surprise you, and that's why you haven't found your passion just yet.

What is your favourite place to visit.

The atrium of Queen's College has an amazing set of items on display. Even if you have no interest in anthropology, do yourself a favour and take a quick visit to the little museum that's right on campus! That pick followed closely by Disney World.

I am currently reading the Leviathan Wake's series of books. It's a science fiction series, but it's a fast paced story. If you're thinking to yourself "I wish I read more" I would strongly recommend it. It's a great piece of addictive fiction.

I am looking forward to being a part of the next generation of design-based thinking. Having one foot in the arts and one in the sciences has coincidentally been the best thing I could have done, given my interests. I love to create and build, but I love knowing that what I make is meaningful to the people who use it. My skills in technology let me build things, but my motivation has always come from my study in arts. After all, the study of arts is the study of human motivation.