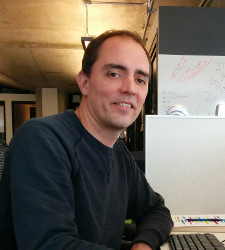 Jeffrey Sturge is a writer and producer of documentary and reality television in Toronto. He graduated from Memorial University in 1997 with a Bachelor of Arts degree (major in anthropology).

Jeff has worked on numerous television series since moving to Toronto in 2000, from The Nature of Things to Cold Water Cowboys. In 2005, he also created and wrote Stealing Mary, a documentary retelling the capture of the Beothuk Mary March. His latest work is a 90-page graphic novel called The Voyageur, the first in a six-part fictional adventure series, loosely based around the journeys of Samuel de Champlain.

Jeff lives in Toronto with his wife Hannah and two sons Eliot and Harry. On Wednesday, November 4, he will launch The Voyageur in conjunction with The Beguiling Books and Art at the Victory Café in Toronto.

When I graduated high school, I wasn't really sure what I wanted to do. So my parents - who are also both MUN graduates - suggested I take a year living at home and go there to figure out what I wanted to do. During this year it became apparent that archaeology and anthropology were, to me, by far the most interesting courses I was taking. And as it happened, MUN has one of the best archaeology programs in Canada.

What drew you to study archaeology originally?

Documentaries were always a big event in our house growing up, especially the National Geographic ones. My dad would tell me a new investigation into the Pyramids or the Sphinx was coming on and he, my mom, my sister and I would all watch it together. It was a real event. I was also really into dinosaurs as a kid. And even though dinosaurs don't really have a whole lot to do with archaeology (digging up human remains) it got me interested in the idea of going out on an excavation and digging up bones.

How did you choose your current path?

I didn't really choose it. I left Newfoundland after graduating in '97 because there was such little work there at the time, certainly not for a relatively inexperienced archaeologist. Ireland, on the other hand, was in the middle of an economic boom and there was a tonne of archaeology going on over there. So I spent three years working there, then returned to Canada where I started working as an archaeologist in Ontario. But, unlike Ireland, archaeology is not a year round gig in Canada, so in January 2001, I had to figure out something else to do. I was always a huge fan of documentary TV and I got word from my buddy Seamus O'Reagan, who was just starting at CTV at the time, that Discovery Channel was looking for an intern. I applied and got the job. That's basically how I got my foot in the door with TV and I never looked back.

What experiences at Memorial prepared you for your professional life?

I got my start in documentary TV as a researcher and this is definitely a skill I learned as a student at MUN. Understanding how to prepare documents and annotate everything I did as well as navigating my way through a library was huge. MUN also has the benefit of having a great archaeology program filled with a number of fantastic profs doing ground-breaking work. What I learned here made me a valuable asset in different history themed shows, which is mainly what I started out working on.

What advice would you give an arts undergraduate today?

The best piece of advice I could give would be to not be intimidated by what's out in the world after you graduate. Everyone else out there, bar a very small number of exceptional beings, is basically at the same level of intelligence. The ones who succeed are the ones who know what they want and go for it.

In what ways has studying archaeology affected your world view?

Excavating an archaeology site lets you see - even though civilization has changed so much - how similar we still are to our ancestors. Despite all the advances in technology, people still need food, shelter and companionship, they're always going to want to be entertained and there's always going to be those on the bottom and those on top.

Things have changed pretty drastically over the last few decades. Going to university no longer means you're going to graduate and work in a field directly related to your degree for the rest of your life. But if you're passionate about what you're studying you can apply it to multiple fields. Just because you're doing an English or a philosophy degree doesn't mean you're only option is to be a prof - a ridiculous factiod I often heard tossed around when I was in school. Everyone needs a skilled writer on their side - from oil companies to prime ministers - and you won't learn this skill studying engineering. Understanding how to effectively write down yours or someone else's ideas is a skill you can apply anywhere if you've got a solid foundation of skills to build on.

How did you go from archaeologist to novelist?

I stumbled upon an internship at the Discovery Channel during my first winter back in Canada. I found I liked the idea of making documentaries and series about history and archaeology even more than I liked excavating archaeology sites. I began my career in TV as a researcher and eventually started writing shows. Once I started writing documentaries I decided to try my hand at fiction and drama. Being a fan of comic books, I contacted Nick Marinkovich, an artist I'd previously worked with on a TV series. I asked him if he'd be interested in this idea I had that began in 17th century Ireland and moved to Canada to follow the journey of Samuel de Champlain. He was and so we got working on the book.

I play a mean mandolin!

The Voyageur is published by Guernica Editions on November 4, 2015.