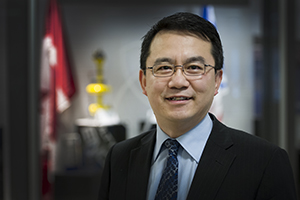 I obtained a B.A.Sc. in naval architecture in 1990 and a M.A.Sc. in ship structural mechanics in 1993 both from Dalian University of Technology, China. I received a PhD in marine hydrodynamics from the Mechanical Engineering Department of Dalhousie University in 2001. Before joining Memorial University, I worked at Martec Limited as a senior hydrodynamicist and then as a product manager for seakeeping software. For three years prior to that, I worked as a hydrodynamicist at the Centre for Marine Vessel Development and Research at Dalhousie University.

My research is in the area of marine hydrodynamics and its applications to ships and offshore structures, and I specialize in solving fluid-structure interaction problems using experimental and numerical methods including CFD and potential-flow-based methods. I have been involved in numerous projects with the marine and offshore industry, government agencies and private sectors, including wave/body interaction, hydrodynamics of deepwater platforms, mooring line dynamics, slamming, propeller vortex flow, vortex-induced vibration of marine risers and ship hull-form optimization. I was recently awarded a large NSERC CREATE Program on Offshore Technology Research.

I have been serving as Chair of the ITTC Ocean Engineering Committee, and served on the Specialist Committee on Power Performance Prediction. I serve as associate editor of ASME Journal of Offshore Mechanics and Arctic Engineering. I have published many papers in refereed journals and conference proceedings and hold patents. In addition, I have developed a few software packages which are used by the marine and offshore industry.