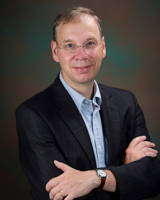 Industrial automation with particular applications to natural resource industries; Socio-economic impacts of automation; Public review processes related to the impact of technology; University intellectual property and its role in innovation

My teaching activities have covered a range of engineering topics including electric circuits, kinematics and dynamics, robotics, engineering design, and impacts of technology on society. I have also taught graduate courses in the areas of robotics and automation, computer vision, and adaptive pattern recognition. Currently my research is in the areas of industrial automation, telerobotics, machine vision, and pattern recognition for applications in the natural resource industries. In recent years I have developed a growing interest in the socio-economic impacts of these technologies.

Currently I serve on the Research Capacity Panel for the Government of Alberta, the Canadian Engineering Accreditation Board, and on the Board of Directors for Shad International, the Health Research Ethics Authority, ACENET, C-CORE and Genesis Inc. I also served as chair of the board of directors of the Professional Engineers and Geoscientists of Newfoundland and Labrador (PEG-NL), and I currently serve on the Registration Committee for PEG-NL. Over the course of my career, I have served on the board of directors for a number of organizations and companies involved in research and technology development.

From 2014-2016, I was chair of a panel appointed by the Government of Newfoundland and Labrador to conduct a public review of unconventional oil and gas development (i.e. fracking) in Western Newfoundland. This review considered the scientific, technical, socio-economic, public policy, regulatory, environmental, and public health issues associated with unconventional oil and gas development.

In May 2016 I started my second five-year term as associate vice-president (research) at Memorial University, and in September 2017 I commenced an overdue sabbatical as a visiting professor in the Innovation Policy Lab at the Munk School of Global Affairs at the University of Toronto and as a Visiting Scholar at Massey College.

During my sabbatical I am carrying out collaborative research with Dr. Peter Warrian as part of the Creating Digital Opportunity project at the Munk School of Global Affairs. The focus of this research is to develop an understanding of the opportunities, challenges, and consequences associated with automation and digitalization of Canada’s underground mining and offshore oil and gas industries.