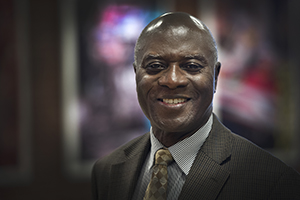 My current research activities focus on the development of control/switching strategies and topologies for renewable energy systems, including fuel-cell, wind energy, and tidal energy generation systems. My research is carried out with undergraduate and graduate students in an atmosphere that encourages continuous interactions among the group members and fosters the development of innovative techniques and generation of new ideas.

The focus of my research for a number of years has been the development of alternative control strategies for inverters in uninterruptible power supply and utility interface applications. A major contribution of the work was the successful development of a novel multi-loop, current controlled voltage regulated PWM scheme for dc-ac voltage source inverters, derived from small-signal models of the controllers, the output low-pass filter and the power converter. The work on the control scheme was one of the first systematic approaches to deriving a unified model of the controller and the power converter. It resulted in a number of publications, including an IEEE Transaction publication, which has made a significant contribution to the control of inverters and influenced research activities in inverter control.