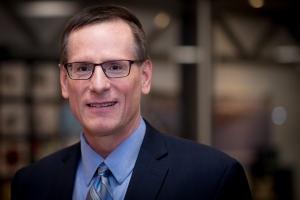 Greg Naterer is Dean of the Faculty of Engineering and Applied Science and a professor of mechanical engineering. He is an innovative leader of academic programs that have a transformative impact on student success. Dr. Naterer has led the Faculty through a period of substantial growth in enrolments, infrastructure, research capacity and interdisciplinary initiatives. Nationally and internationally, he has served in prominent leadership roles in education and research, such as Chair of the National Council of Deans of Engineering and Applied Science (NCDEAS) and the Discovery Grant Committee (Mechanical Engineering) of Canada's Natural Sciences and Engineering Research Council (NSERC). Dr. Naterer is an active community volunteer. He serves on the Board of Directors of the Dr. Jack Hand Legacy Foundation (a cancer care foundation), Rotary Club of St. John's East and the Gathering Place. He was born in Toronto, Ontario, and received his PhD in mechanical engineering from the University of Waterloo in 1995. Dr. Naterer and his wife, Josie, have three children.

Dr. Naterer has made significant contributions to mechanical engineering in the fields of energy systems, heat transfer and multiphase flows. He led an international hydrogen energy consortium, involving eight collaborating institutions, five countries and six industrial partners, which developed the world’s first large-scale Cu-Cl cycle of thermochemical water splitting for hydrogen production. Hydrogen is a clean energy carrier and potentially major solution to climate change. Dr. Naterer has (co-)authored three books, six patents and many technical publications that have received a total of over 8,000 citations. He was previously a Tier 1 Canada Research Chair in Advanced Energy Systems.